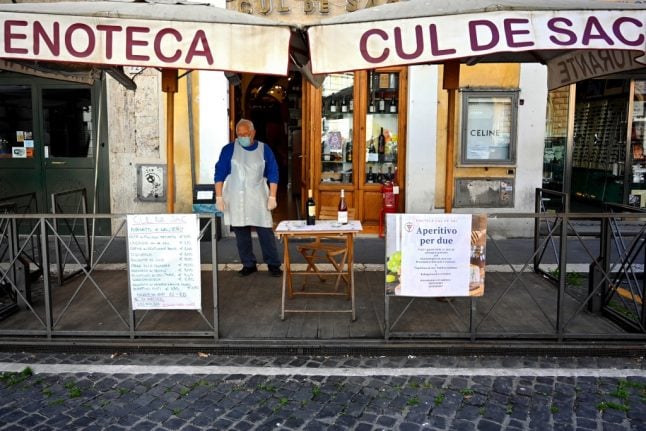 We're two days into “phase two” of lockdown here in Italy, and it's not quite as I thought it would be.

Under phase two, certain types of shops and businesses can gradually reopen. With a record recession on the horizon, there's no doubt that people need to start getting back to work. And there's concern about the psychological impact of keeping people indoors for almost two months, under Europe's longest lockdown.

Everyone's experience is different, but I haven't struggled as much as I expected to with spending the past eight weeks inside. I noted the positives (less pollution, peace and quiet) and I felt incredibly lucky. I may not have a garden, but I have a decent-sized apartment, a sunny balcony, and enough money for food. I can work from home, and I'm safe and well.

But while I got through phase one without too much fuss, going back outside was unexpectedly anxiety-inducing and unpleasant. Phase two turns out to be more worrying, and harder to get used to, than the initial strict lockdown

PHASE TWO EXPLAINED: What's changed in Italy from May 4th?

Like everyone else, I was looking forward to the start of phase two and the small freedoms it promised. When the changes were finally announced last Sunday, they were underwhelming and confusing, but they still seemed positive. A first step on the road back.

The traffic fumes were the first thing that hit me when I opened the windows on Monday morning. Central Bari was already well on its way back to normality in that respect. Shutting the window and peering out of it, I watched a small queue forming at the condom machine across the road.

Two speeding motorini had a near miss on the corner by the bins, swerving and beeping. Everyone seemed to be busy resuming their pre-lockdown lives.

The news was full of stories about people around Italy getting up at the crack of dawn to visit relatives, or simply to run in the park for the first time in over eight weeks. These stories, meant to be heartwarmng, left me feeling alienated – our tiny city parks are still shut in Bari, and my family are abroad.

Still, we've got the seafront, the ban on exercise has been lifted, and coffee bars have been allowed to reopen. They're serving takeaway coffees only, but after two months of nothing but the moka pot, that alone was a reason to go outside.

I regretted going out almost instantly, as a panting jogger slammed into me on a corner. It's hard to avoid people at all on the narrow pavements, never mind stay two metres apart. He mumbled an apology and carried on, and I spent the rest of my 15-minute walk trying to dodge people and traffic, crossing busy roads to avoid small groups chatting in tight circles. I passed two coffee shops with crowds outside, filling the pavement and spilling into the road. How much did I really want that cappuccino? Not as much as I'd thought.

Our famously strict local mayor has spent weeks telling people to keep off the lungomare, the walkway by the sea. On Monday, people wasted no time in getting back out there. I stood across the road, dismayed and anxious, watching crowds jogging and strolling up and down, some in masks and gloves. And then I turned around and went home.

Sorry to be a downer when I know loads of people are just excited about getting some freedom back… But I think this is when we're really going to see the negative economic and social impact of the shutdown, and the crowds of people not distancing at all are pretty worrying.

Tuesday morning's attempt at going out earlier was no better. I woke up to the sound of drilling as the construction site across the road got back to work.

A short walk revealed that the nearby coffee shops were eiher closed or too busy. As I reached my apartment and went to pull my keys out of my bag, a man's arm suddenly barred my way. “No entrance,” he shouted. “Money, now.”

I was more alarmed by his spit on my face than anything else. Taking a few steps back, I told him the police were on the corner, and he turned and ran. I ran, too, upstairs to my apartment, kicking off my shoes outside the door as if they were covered in toxic waste, and scrubbing my hands and face until it hurt.

Friends in Rome and Milan report long walks in beautiful parks, still-empty streets, and visits to quiet coffee shops. But here in Bari, all the downsides of city life – crowds, pollution, traffic, noise – have immediately sprung back to almost pre-lockdown levels. It's life pretty much as it was, but now with added stress.

Here in southern Italy there's also the looming threat of social unrest, with poverty levels skyrocketing. Protestors gathered today outside Bari's city hall, demanding money for families and businesses left with nothing due to the shutdown. The atmosphere is heavy, people are tense, and we don't know what the city will be like after this.

With fewer police checks and thousands of people now estimated to be returning home to the south from areas with higher rates of infection, the risks are clear.

As I write, the sound of motorbike engines and drilling outside has just been drowned out, not for the first time, by the wailing of an ambulance siren close by.

I don't know about everyone else, but I'll be staying at home for a while yet.