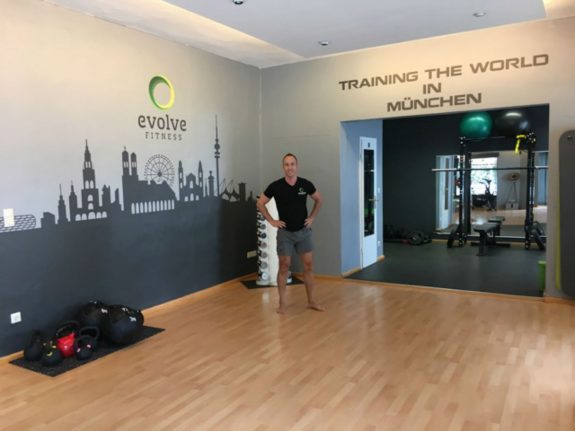 Conway at home at Evolve Fitness in Munich. Photo courtesy of Simon Conway.

Simon Conway has lived in a fitness studio in Munich for the past five weeks.

With 180 square metres of space, it’s a lot loftier than most flats in the Bavarian capital.

But Conway’s unconventional residence is far from planned: In mid-March, the Irish native was on his way back to Barcelona, where he had opened a third location to his Evolve Fitness studio and moved house at the beginning of the year.

But then borders closed around the continent, leaving Conway stranded. And when Bavaria declared a strict lockdown – with residents only being allowed outside alone and for essential reasons – Conway decided to stay at the studio geared towards the city's international residents which he had opened six years prior.

“I can say that so many people have had their lives dramatically changed,” said Conway. “I'm sitting in an empty studio now and a few weeks ago I was looking at a packed studio with our clients from all over the world!”

Evolve, which also has a location in Frankfurt, offers mostly one-on-one personal training sessions but also English and Spanish languages classes taught by a staff hailing from England, Ireland, the US, Spain, Australia and Bulgaria.

Soon after the corona crisis hit, he helped transfer these workouts online, led through Zoom in real time by trainers also in lockdown, including Conway.

“We have the human and community element. There's already a lot of stuff online, but this sets us apart,” he said. “From a coach’s point of view we have the ability to clearly watch our clients' movements online and give direction or make corrections fairly easily.” Evolve students with a trainer before the days of social distancing. Photo courtesy of Simon Conway.

Online fitness has soared in popularity since the beginning of the corona crisis, with fitness and yoga studios across the Bundesrepublik who never offered digital classes shifting entirely online.

German athletes have drawn attention to their unconventional 'Home Offices', from dancers bringing their dogs and kids into the routine in their living room, to triathlete Jan Frodeno carrying out an entire Ironman competition from his home in Spain, including swimming 3.86 kilometres in a small counter-current outdoor pool.

One of Germany’s most popular platforms for sports classes and gyms, Urban Sports Club, has transferred a bulk of their course load online – despite initially telling customers they could simply freeze their accounts indefinitely.

Evolve also did not plan to make the switch. “Initially people were thinking: 'I don't want to do an online workout. This will just be a two week thing,'” said Conway.

Yet several students seemed to have made the shift online at a Monday evening Zoom HIIT (high intensity interval training) class, as an instructor led them through a series of challenging exercises from her Barcelona balcony.

“I can’t tell if you’re exhausted or if the screen froze,” she said after leg rotation exercises. She continued at a swift and steady pace, pausing briefly for individual feedback or a cat that crept by.

As with a regular class, attendees stuck around afterwards to chat – whether about their days at Home Office or sharing the least busy hours to go for a run in the Englischer Garten.

'It's important that people stay active'

Conway, who had lived in Munich since 2013, said he was ultimately glad that he ended up in lockdown in Germany rather than Spain – which has had a lockdown barring even jogging outside.

“Right now it's very important that people stay active,” he said, pointing out that many clients who previously focused on fitness as a way to get or stay in shape are now turning to it more for the mental health benefits.

While many of Evolve’s clients stayed with the studio amid the corona crisis, Conway said the firm was struggling to pay the rent at its central locations. He applied for, and received, a government grant for freelancers and small businesses.

READ ALSO: How freelancers and small businesses can apply for coronavirus payments in Germany

Bavaria remains one of the strictest states in Germany in how it enforces the lockdown, but it's gradually reopening the economy and as of this week allowing two people to be together outside at once (with 1.5 metres distance, of course).

Conway is hopeful that, by mid-May, the studio can train clients back outdoors with safety measures in place like masks and distancing and offer 1:1 sessions at the studio. In the meantime, his studio is offering trial classes with the code 'evolvetogether'.

He said: “It’s been fantastic to see both trainers and clients adapting to the changes and learning new skills at the same time!”