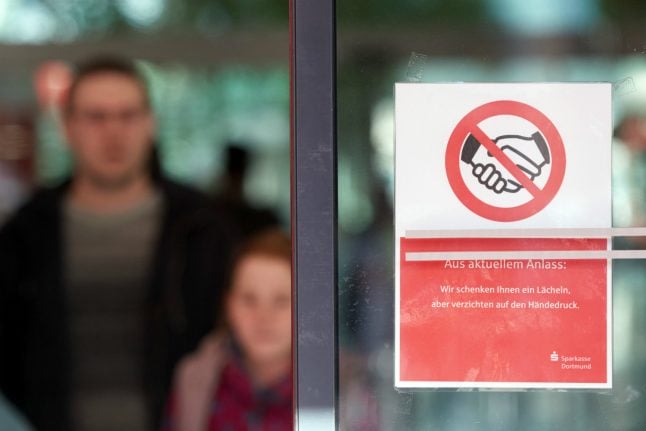 A sign telling people not to shake hands at a bank in Dortmund. Photo: DPA

As of Thursday afternoon, the number of confirmed coronavirus cases in Germany topped 2,300 – up from around 1,500 from Wednesday morning – and there have been four reported deaths.

Taking these growing numbers into account, the Robert Koch Institute urged for more “social distancing” in Germany, especially to protect the country's most vulnerable population: the elderly.

The Robert Koch Institute analysed about 650 cases of those who've contracted the virus in more detail, reported German daily Welt on Thursday.

Through studying the cases, researchers found that 54 percent are male and 46 percent female. Among them there were 11 children under 5-years-old and another 14 children up to the age of 14.

READ ALSO: What's the latest on coronavirus in Germany and what do I need to know?

RKI President Lothar Wieler said that 60 to 70 per cent of the population would become infected with the virus over a longer period of time.

'The mortality rate will rise rapidly'

And he said the country should unfortunately expect more deaths.

“Of course, more people will die in our country,” Wieler said. “Particularly when it comes to those over 65, the mortality rate will rise rapidly.”

Authorities and experts have therefore called on people in Germany to try and protect people in this age group.

“We must really protect the population above the retirement age,” said the director of the Institute of Virology at the Berlin Charité, Christian Drosten, at the beginning of the week.

He said families needed to look for solutions that would keep older people safe.

“From now until September or October, children should no longer go to grandma and grandpa for care,” he said.

READ ALSO: School closures and no partying: How coronavirus is affecting life in Germany File photo shows a grandfather with his grandchild in Hanover. Photo: DPA

Instead, he advised that families help out grandparents by getting their shopping for them so they were less at risk.

The RKI has also called on people in Germany to keep their distance from each other.

“The point is to create distance between people.”

Even though numerous events have been cancelled, Schaade said everyone should consider if their social engagement is worth carrying out.

People should even consider when or if to visit a restaurant, he said. This also applies to meetings and bigger social gatherings.

“This is an appeal to personal responsibility,” said Schaade.

It echoes calls from both Chancellor Angela Merkel and Health Minister Jens Spahn earlier this week who said people in Germany needed to do their bit to protect vulnerable people by trying to limit the spread of the virus.

“Our solidarity, our reason and our hearts are already being put to the test, and I hope that we will pass this test,” said Merkel.

READ ALSO: Coronavirus: What restrictions are there to daily life in Germany?