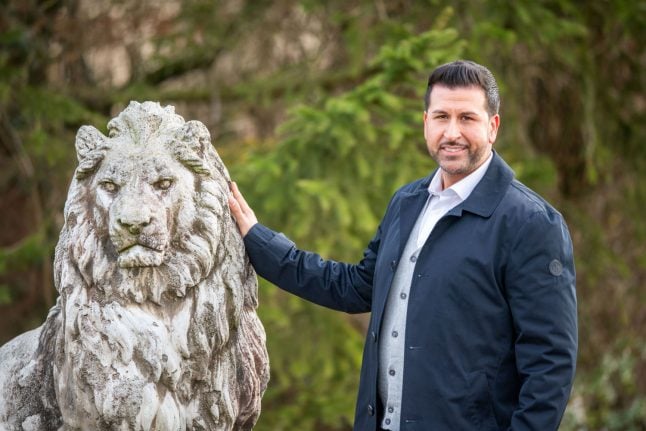 Ozan Iyibas stands next to a Bavarian lion in January. Photo: DPA

But he has unleashed a mini earthquake with his candidacy — as the first Muslim standing for the Christian Social Union (CSU) in a predominantly Catholic region.

“I don't see any contradiction in this choice,” says the 37-year-old, sitting back in an armchair and clutching a mug of tea in the town of Neufahrn.

“It's a question of values. The values of my religion are very close to those of Christians.”

While Iyibas won the local CSU's nomination unanimously, such support is not always a given in the region where party chief Markus Söder in 2018 ordered crosses to be displayed at the entrances of all public buildings, as a way of honouring the region's “cultural heritage”.

READ ALSO: Crosses must be mounted in all state buildings, Bavaria orders

In another Bavarian village, Wallerstein, resistance from local CSU members was so great against a Muslim candidate that the hopeful was forced to pull out of the race.

“It was not about me, but about my faith. For example, an argument is that the C in CSU and I as a Muslim did not go together,” Sener Sahin told Süddeutsche Zeitung.

Party top brass had sought to intervene in Sahin's favour, but the rank and file would not budge, even though Sahin is a successful entrepreneur who was both player and trainer in the village football club and whose wife is Catholic.

The CSU, sister party of Chancellor Angela Merkel's Christian Democratic Union (CDU), has been the dominating force in Bavaria since the end of World War II.

But the far-right and Islamophobic AfD, and the ecologist Greens, have in recent years chipped away at that support, which at the last state elections in 2018 hit its lowest level since 1954.

In recent years the CSU has swung between lurching right to save its conservative vote, and veering left to win back younger, ecologically minded voters.

In Neufahrn, the CSU is counting on Iyibas' unusual profile to rejuvenate the party and wrest the mayoral post from the Greens at the March 15th vote.

READ ALSO: Everything that changes in March 2020 in Germany The consultant for start-ups was born just a few kilometres away from the town where he grew up in the suburbs of Munich.

When he crosses paths with someone he knows, they discuss the local economy, public transport, the environment — but not religion.

“In my opinion, the most important issue is housing,” says Erica, a pensioner who he meets at the entrance to a grocery store.

“The religion of the candidates makes no difference.”

Iyibas, who is of Turkish origin and an adherent of Alevism, a secular branch of Islam, said he has been brought up to feel at ease in a predominantly Catholic environment from a young age.

“When I was little, my mother took me to a church and I asked her why. She replied that if we were going to live here, we needed to understand and share the values of this country. That's what I have done.”

Stefan Wurster, a professor of political studies at the Bavarian School of Public Policy, has noted that “many Germans from migrant backgrounds believe in conservative values that correspond with those of the CSU.”

The conflict in the party today, he says, is “less between Christians and Muslims, and more between religious people and atheists”.

READ ALSO: Eight things to know about Islam in Germany

Iyibas is also convinced his party is changing.

For him, a “new conservatism” could arise that “honours tradition but innovates at the same time”.

But he still faces an uphill battle to win over local far-right supporters.

AfD members have branded him an “enemy” on Facebook, and have told him that they “will fight against a Muslim mayor”.

Speaking to The Local for the Sweden in Focus podcast, out this Saturday, Osman said she understood why the police had allowed the demonstrations to go ahead in the first place but that the safety of civilians and police officers should have taken precedence when the counter-demonstrations turned violent.

“Just to be clear, I don’t think it’s an easy question. I think everyone, regardless of views or beliefs, should have the right to demonstrate,” said Osman, who writes for the left-wing Dagens ETC newspaper and previously lectured for the anti-racist Expo Foundation.

“I understand people who say that violence [from counter-demonstrators] shouldn’t be a reason to stop people from demonstrating. I truly believe that. But at the same time: was it worth it this time when it’s about people’s lives and safety?”

Osman noted that Rasmus Paludan did not even show up for a planned demonstration in her home city of Linköping – but the police were targeted anyway.

“I know people who were terrified of going home. I know people who had rocks thrown in their direction, not to mention the people who worked that day, policemen and women who feared for their lives. So for the safety of civilians and the police the manifestations should have been stopped at that point. Instead it went on, not only for a second day but also a third day and a fourth day.”

On the question of whether it was acceptable to burn Islam’s holy book, Osman said it depended on the context.

“If you burn the Koran mainly to criticise religion, or even Islam, of course it should be accepted in a democracy. The state should not only allow these things, but also protect people that do so.

“I do believe that. Even as a Muslim. That’s an important part of the freedom of speech.

A previous recipient of an award from the Swedish Committee Against Antisemitism for her efforts to combat prejudice in society, Osman drew parallels with virulent anti-Semitism and said it was “terrifying” that Paludan was being treated by many as a free speech campaigner rather than a far-right extremist.

“If you are a right-wing extremist that wants to ethnically cleanse, that wants to cleanse Muslims from Sweden, and therefore burn the Koran, it’s actually dumb to think that this is a question about freedom of speech. When Nazis burn everything Jewish it’s not a critique against Judaism, it’s anti-Semitism.”

Anti-Muslim sentiment in Sweden tended to come in waves, Osman said, pointing to 9/11 and Anders Behring Brevik’s attacks in Norway as previous occasions when Islamophobia was rampant. Now the Easter riots had unleashed a new wave of hatred against Muslims that she described as “alarming” and the worst yet.

“I do believe that we will find a way to coexist in our democracy. But we have to put in a lot work. And Muslims can’t do that work alone. We need allies in this.”

Listen to more from Bilan Osman on the April 23rd episode of Sweden in Focus: Why Sweden experienced its worst riots in decades.