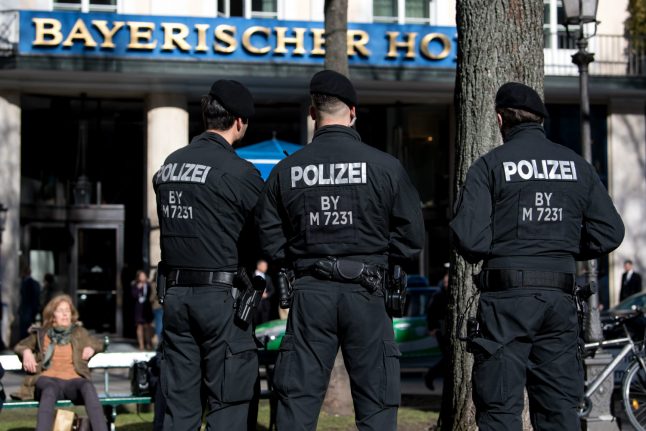 At first glance, it appeared comical. Behind a barrier festooned with fearsome placards and an expensive PA system, two gentlemen stood glumly, occasionally summoning and murmuring to an offsider.

In front of them stood a crowd of about 15 to 20 counter-protesters – punks, hippies and anarchists clad in black clothing. Speakers blared angry rap exhorting youth to ‘fight for their people’, and were answered by phones and boomboxes blaring anti-fascist standards such as ‘Bella Ciao’ and ‘Die Internationale’.

It’s a scene being played out over and over again in German cities, as parties such as Alternative for Germany (AfD), who many say hold extreme far-right views, increasingly make a play for voters disenchanted with the centrist Christian Democrats (CDU/CSU) or centre-left Social Democrats (SPD).

And with extremist attacks such as the shootings in Hanau, Halle and the murder of pro-refugee politician Walter Lübcke, the role of the far-right is also being scrutinised further.

'It's hard to talk with them'

Some might consider the drama at the Munich stall a bit of a pantomime – each side trying to make a louder noise in the hopes of attracting attention.

It was only when I stopped to ask a few questions to bystanders that things got a little more sinister. Franziska, a local teacher in her 30s, told me that the man in sunglasses behind the barricade was Heinz Meyer of the anti-Islamic Pegida organisation.

Meyer had been banned by Munich City Council from running for the office of mayor, as he's been classed as a ‘dangerous person’, due to comments apparently condoning the NSU murders. He also previously held various convictions for sedition and inciting violence.

The older, bespectacled man was Karl Richter of ‘Burger-Initiative Auslanderstopp’ (or ‘Citizen’s Initiative to Stop Foreigners’). He was already an elected member of the council.

A member of the NPD, he had previously openly consorted with Holocaust deniers, and made a number of controversial, supportive comments about the Nazi regime. The pair had joined forces to campaign across the city, including at the city’s iconic Marienplatz, the night before.

Franziska had come across them and was concerned, stating: “They were over there (at Marienplatz) and I was just walking by and I got myself some handouts and started handing them out.

“They told me that they're gonna be here today. Honestly, who could have anything better to do on a Saturday afternoon than fighting these guys?” A protest in Munich against extremist views in February after the Thuringia election debacle. Photo: DPA

When I asked her why she chose to hand out leaflets, she was unequivocal. “When people, men like them stand here and promote things that are so obviously anti-Muslim or homophobic or anti-Semitic, it's hard to talk about it, it's hard to talk with them,” she said.

“So, I preferred talking to other people who just passed by informing them about what these people stand for and telling them ‘Don't vote for them, OK?”

Things were almost jovial for a time, with the two sides trading jeers and the occasional insult, despite a significant police presence surrounding the stage.

READ ALSO: From the NSU to anti-Semitic attacks: How racist and far-right terror in Germany is rising

Mostly, shoppers passed by. Then, a young person, clad in a hoodie, took out a water pistol and began dousing unattended placards with what appeared to be tomato juice. This continued for about 30 seconds before Meyer burst from behind the stage and rapidly approached the teen.

Before I knew it, 10 police charged through, subduing Meyer and removing him from the scene, along with the teen.

Germany’s ‘Grundgesetz’, or Basic Law grants fairly comprehensive freedom of speech, and protects the right of those of almost political persuasion to run for office.

However, I can’t help but feel that in the wake of both the Halle and Hanau attacks, the German far-right are escalating in taking advantage of this freedom to both inflame tensions and put forward those completely unsuited for office – a kind of ‘planned chaos’. They may not win, but they’ll do some damage in the process, so to speak. A woman holding a 'grandma against the right' poster at a rally in Germany. Photo: DPA

While I was shocked at Meyer’s actions, I was also appalled at the open, unapologetic hatred for Muslims, foreigners and anyone considered “not German” expressed on the placards and in the booming, menacing rap spewing from the speakers. It was something that I couldn’t imagine in a modern city like Munich five years ago, and shocking to behold in 2020.

With the news on Monday of the AfD’s Björn Höcke entering the state premier election race in the stage of Thuringia, I fear that we will only see more of this.

Höcke has made explosive comments about the Memorial for the Murdered Jews of Europe in Berlin, and has threatened ‘massive consequences’ for journalists who ask sensitive or probing questions.

It’s unthinkable that wherever he goes, we won’t see similar scenes as I did by the Karlstor on Saturday. He is a figure that thrives on chaos and causing disruption.

The German far-right are on the back foot, as the role of their leading figures and communities are being scrutinised – with some arguing that they have provided the ideological foundations for extremists.

In response, rather than tone down the rhetoric, they have pushed forward with it, and put forth more extreme candidates, guaranteed to divide.

Not only does the final stretch of Munich’s mayoral race look to be ugly, but one might argue, much of the German political calendar going forward.