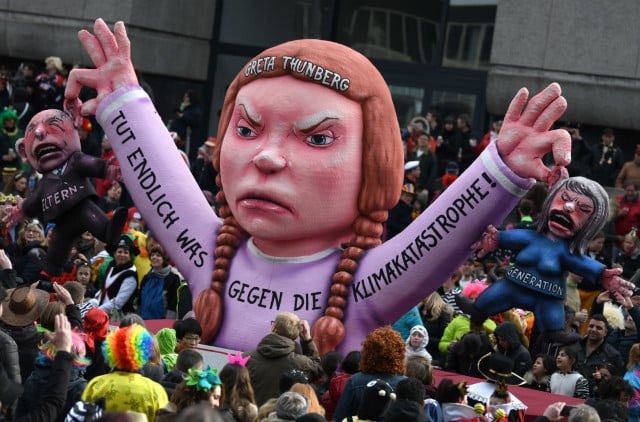 Greta Thunberg shown in a Düsseldorf float in 2019 with the motto: 'finally doing something about the climate catastrophe'. Photo: DPA

When it comes to floats that pack a punch there’s probably no better place to find them than Düsseldorf, which is expected to pull in a million visitors at this year's Rosenmontag celebrations on Monday.

And when the 'Rose Monday' parade comes around (this year on February 24th), Düsseldorfers, as well as other Germans and many across the globe, will be looking out for the creations of Jacques Tilly.

Nothing short of a legend, Tilly turns politics on its head to produce figures that get everyone talking – from Trump to Thunberg – the artist is not afraid to make people gasp.

Tilly, who's been creating the carriages every year since 1984, said: “Jester's licence means the right of fools, the high lords, the authorities, to be allowed to tell an uncomfortable truth without being punished for it. Carnival is not conceivable without the jester's licence, it is its very essence.”

READ ALSO: 'It caused a real shitstorm': Meet the man who skewered Trump at the carnival For local Franzi Brundell, 32, who has attended Düsseldorf Carnival since she was a child, the political side of it makes the festival stand apart from other German celebrations.

“Cologne is more traditional and focuses on the traditional side of carnival, which is also great, but what I like about the Düsseldorf one is it’s very satirical and political,” she told The Local.

“It’s not the biggest one in Germany but it’s the most political carnival in Germany,” added Hans-Peter Suchand, spokesman for the Düsseldorf Carnival Committee.

“We take politicians like Mr Trump or Brexit or other events that we find ridiculous and turn them on their heads – everyone smiles about the caricatures.”

READ ALSO: The freedom of fools: How did Germany's carnival become a political event?

Brundell, a German and English teacher, said Tilly’s creations are a talking point every year.

“I think he always tries to find the right tone to portray what’s going on in society,” said Brundell. “He’s not scared. He’s very out there and provocative.”

In recent years his depictions of Brexit have been particularly, ahem, on the nose. Brundell explained how she’s been discussing with friends about possible themes that will come up this year, such as the Thuringia voting scandal.

“People are waiting for what’s going to happen and whether he will pick up on very recent trends,” she said.

This week following the shootings in Hanau, it was announced that Tilly would design another float paying tribute to the victims of the terror attack, meaning 13 floats by Tilly will run on Rosenmontag instead of 12.

When and what is Karneval?

Carnival, also known as the 'fifth season' is celebrated in many places in Germany, from Cologne to Mainz and Cottbus, and each festival has its own unique selling points.

Depending on where you're celebrating it in Germany, it's known as Karneval, Fasching, Fastnacht or Fastnet. The festival has its roots in Catholicism and many countries across the world have their own versions.

The below graph gives an overview of the estimated numbers attending Rosenmontag parade across the country. Graph translated by Statista for The Local Germany.

READ ALSO: From Cologne to Cottbus, where to celebrate carnival in Germany

In Düsseldorf carnival celebrations kick off at 11:11 am on November 11th, when the Carnival spirit Hoppeditz awakes.

The street festival lasts five days in February. It launched on what’s known as Fat Thursday with “Altweiberfastnacht”, which is known as being very wild and involves women in costumes storming into the town hall and cutting off the mayor’s tie, symbolically taking control over the city.

Friday is a time for some rest and to get your costumes sorted for the coming days. There are lots of family events on Saturday and Sunday.

The celebrations culminate in the Rose Monday Parade, also known as the Shrove Monday procession. The end of the season is midnight on Shrove Tuesday (February 25th this year), the day before Ash Wednesday when the 40-day Lent season begins.

To add to the drama, the effigy of Hoppeditz is, rather disturbingly, burned on Ash Wednesday. The remains are then symbolically buried, and the carnival is laid to rest before the next season.

Rosenmontag is the highlight of the festival for many.

“That’s when most people go and celebrate,” said Brundell, who this year will dress up as a bubble gum machine. “The other days are also important but Rosenmontag is probably the most famous day.”

Around a million spectators line the streets of Düsseldorf, donning costumes to watch decorated floats flow through the city. Those on the floats throw sweets (Kamelle) and trinkets at the locals and visitors lining the streets. There’s lots of dancing and singing. And you might hear locals cry out “Helau!” to each other often as they get into the spirit.

But Brundell warned that the music, which she says is a mix of traditional German music with “weird lyrics” can be really bad. “I can’t listen to it apart from at the carnival,” she said. “It's even worse than Schlager.”

READ ALSO: 10 words you need to know at Cologne's carnival

The whole Karneval experience can be a lot to take in – especially for non-Düsseldorfers.

Toronto-born Jenna Davis, 28, whose first Karneval experience was in 2015, said: “The first year was quite overwhelming and exciting all at once.

“As a newcomer to Düsseldorf, I guess I hadn’t realized just how big the event really was, and that it wasn’t just over the course of one day, but almost an entire week.

“My initial thought was ‘how amazing is this! It’s like our Canadian Santa Claus Parade mixed with Halloween – the best of both worlds – candy, costumes and parades down every street!”

But Davis, who runs expat website Life in Düsseldorf, says everyone can enjoy the party atmosphere even if they don’t attend all the events.

“The great thing about this 'fifth season' in Düsseldorf is that there really is something for everyone – the party goers, the families, the schools, the LGBT community, etc.

“The Karneval atmosphere is chaos, absolute chaos! I don’t think there is a single “calm” experience during Karneval, but if you’ve got the energy to celebrate, it’s awesome.”

IN PICTURES: Rosenmontag celebrations go ahead despite storm

It's also a huge boost to the local economy to the tune of €200 million per year, according to Suchand.

“It’s a large part of our culture in Germany, especially in North Rhine-Westphalia,” he added.

So just how do you survive it? Well, be prepared for anything.

For example, don't be afraid if lots of people talk to you or even try to kiss you.

If you do receive a smooch from a stranger, the greeting is called Bützchen.

“The spirit of carnival is to welcome each other, to have a drink, to hug and that’s just part of that,” said Bundell. “It's not meant in a weird way.” The mayor of Düsseldorf receiving a kiss on Thursday. Photo: DPA

Davis said first timers should get ready for a whole week of festivities.

“If you really want to go all in, feel free to bring a costume for every day of Karneval, many people do,” she said.

“Bring the energy. Karneval is the craziest week of the year in Germany filled with too much candy, too much beer and an extreme amount of people from all over North Rhine-Westphalia and Germany.

“Most importantly – pace yourself and plan out your week – where you want to go and things to want to experience.”

Brundell said it’s important to remember it’s not all about drinking alcohol – although that can be a big part of it for some.

“It makes me sad that people think it’s just an excuse to drink,” said Brundell. “I know some people take all year to make their costumes, their mini floats – they have five different costumes for their one year old.”

For Brundell it’s about inclusiveness, making friends and everyone being together no matter their background.

“Be open, embrace it and don’t be scared,” said Brundell. “It can be wild but at the end of the day it’s a welcoming thing.”

“It’s a fabulous scene for everyone,” added Suchand.

Culture minister Roselyn Bachelot, taking part in a Q&A session with readers of French newspaper le Parisien, confirmed that the annual summer festival will go ahead this year on its usual date of June 21st.

The festival date is normally marked with thousands of events across France, from concerts in tiny villages to huge open-air events in big cities and street-corner gigs in local neighbourhoods.

Last year the festival did go ahead, in a scaled-down way, and Bachelot confirmed that the 2021 event will also happen, but with restrictions.

She said: “It will be held on 21st June and will not be subject to the health passport.

“People will be able to dance, but it will be a masked party with an 11pm curfew.”

Under France’s phased reopening plan, larger events will be allowed again from June 9th, but some of them will require a health passport (with either a vaccination certificate or a recent negative test) to enter.

The Fête de la musique, however, is generally focused around lots of smaller neighbourhood concerts.

The curfew is being gradually moved back throughout the summer before – if the health situation permits – being scrapped entirely on June 30th.

“The rate of 50 percent of people vaccinated should have been reached by then, so we will reach an important level of immunity.”

The Fête de la musique is normally France’s biggest street party, with up to 18,000 events taking place across the country on the same day.

It’s hugely popular, despite being (whisper it) the idea of an American – the concept is the brainchild of American Joel Cohen, when he was working as a music producer for French National Radio (France Musique) in the 1970s.

By 1982 the French government put its weight behind the idea and made it an official event and it’s been a fixture in the calendar ever since.