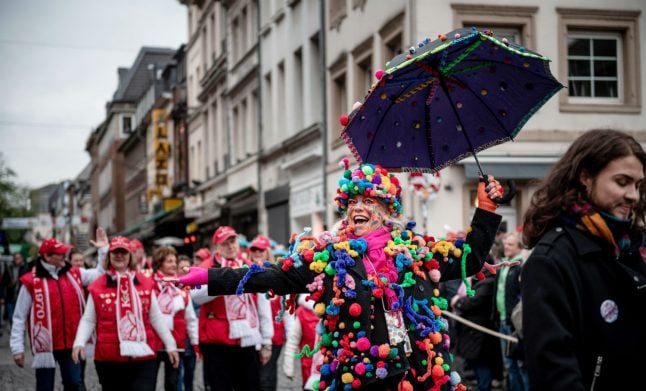 A parade celebrating Karneval moves through the streets in Düsseldorf. Photo: DPA.

In mid and northern Germany, the festivities are known as Karneval. In the south, it’s more commonly known as Fasching. Carnival celebrations are also called Fastnacht in various cities as well.

By many, Cologne is considered the capital of Karneval here in Germany. Many other cities and small towns follow a similar calendar of events during the last weekend — Weiberfastnacht, Rosenmontag, Shrove Tuesday, etc — but have their own takes or twists on the annual celebration.

Here is a round-up of where to spot the craziest costumes, partake in parades, hear music, dance for hours, and, well, you get the gist.

Even the city of Cologne says that the “real crazy days” don’t begin until Thursday, February 20th, also known as Weiberfastnacht. The street carnival at Alter Markt will open shortly after 11 o’clock — 11:11 am, to be exact — and various parties, plays, and masked balls will follow into Thursday evening, Friday, and Saturday. One of the many creative costumes at Cologne's Carnival. Photo: DPA.

While there is a big a parade on Sunday, the big, official parade organized by the Cologne Carnival Festival Committee is on Monday, also known as Rosenmontag. The parade is about three hours, 6,5 km in length, and, in recent years, included over 10,000 participants. There are also over 70 floats from which “Strüßjer,” bunches of flowers, and “Kamelle,” or sweets, will be thrown to onlookers. The city recommends arriving at the parade route early for a good spot because “latecomers pushing to the front are unpopular.”

Tuesday is expected to be a bit quieter, but the big event is when Nubbel is burned. Nubbel is a straw figure symbolizing all of the sins that may have been committed in the preceding days and earlier in the Carnival season.

Cologne also has a Carnival museum that is opened on select days year round. Düsseldorf is famous for its Bivouacs, many small, often tented festivities that allow Carnival committee members to introduce themselves to locals and visitors. These events start early in the Carnival season but are still expected to continue to this last weekend, per the Dusseldorf Carnival committee website.

Famous for its parades and parties, Mainz has some parade participants that literally stand out from the rest of the crowd. For decades, Schwellköpp, or oversized, caricatured papier-mâché heads, have been a part of the Rosenmontag parade.

Mainz celebrations also have a reputation for diving into politics. In recent years, floats and costumes have caricatured international politicians, including not surprisingly U.S. President Donald Trump. One of the political floats at a Rosenmontag parade in Mainz caricatured American President Donald Trump. Photo: DPA.

Like its neighbors in the Rhine regions, Fulda in Hesse also hosts many events. The Rosenmontag, or RoMo, parade is expected to attract 4,000 Carnival fans and is the larges in the state of Hesse. Children perform a special dance in front of the town hall as part of the celebrations in Cottbus. Photo: DPA.

Carnival is more popular in Germany’s western and southern regions, but Cottbus in Brandenburg, showcases one of the east’s biggest parades. This year, Cottbus is expecting close to 100,000 onlookers for its colourful Rosenmontag parade.

During Carnival time, Seligenstadt is known as Schlumberland. The fools or Carnival revelers are called “Schlumber” here, hence the town nickname.

Though a small town compared to Cologne, the Hessian town expects 40,000 visitors for its Rosenmontag parade and revels, like various balls throughout the weekend. 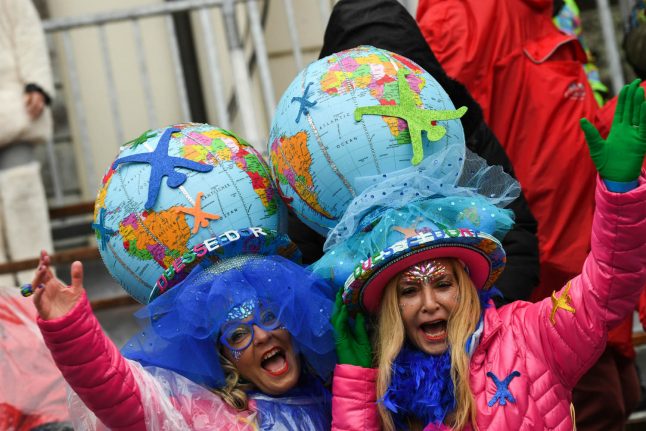 It was at about 2pm on a stormy Sunday as I sat next to a group of people dressed as pirates downing mini bottles of Schnapps when I wondered if I was destined to live in Duisburg.

I had been stuck in the train station of the western German city for over an hour as I tried to travel from Berlin to Düsseldorf.

Heading west to celebrate Karneval for the first time, I had no idea what to expect. It turned out to be a very wet and windy experience – but one I’ll never forget thanks to the enthusiasm of the locals whose spirits could not be dampened by any amount of rain.

READ ALSO: The calls you'll hear at Carnival – and what they mean

After being kicked off the high speed train in Duisburg because of the storms, I wandered around aimlessly, pondering how I’d get to my final destination. Eventually, I followed the pirates onto another train.

“The carnival celebrations in Duisburg have been cancelled because of the weather so we are going to Cologne,” said one of the revellers dressed as a Victorian gentleman.

There were plenty of people getting into the festival atmosphere. One thing I’d been warned about in advance of carnival was the music – and, dear reader, it was so, so bad.  Think Schlager but even worse if that’s possible. And the same songs are repeated over and over and over and over…

But it’s strange – the more I listened to it, the more I began to warm to it. Carnival fever was catching on.

Ok I probably live at Duisburg station now, there’s no way out. pic.twitter.com/y1cYvrZImV

It was only when I was actually in the Rhineland, far away from grey Berlin, that I realised just how serious a business carnival is. People love it and embrace it completely.

It’s a huge event in Germany’s Catholic regions where the so-called “fifth season” brings out millions of revellers every year.

Traditions differ depending where you live: people say Cologne has the biggest party, while Düsseldorf has long been known for putting on the most controversial satirical displays.

One thing that’s certain: you need to wear a fancy dress costume. I’d already failed at the first hurdle, believing that adding a bit of colour – my yellow raincoat – was enough.

“What’s your costume?” one of the pirates asked me. I told him I didn’t have one, that I was an amateuer.

“Are you Greta Thunberg?” shouted a friendly Ghostbuster, as if there was no way that I could have come without a costume. Apparently, some people spend a whole year planning what they're going to wear for the street festivals during Karneval.

“I guess I am,” I said, pointing to my raincoat and hat which had a vague Thunberg vibe.

They thrust a beer in my hand and turned up the music.

We stopped on the tracks and, after a long wait, the train conductor said a tree had blocked the line and we had to go back to Duisburg.

The stormy weather was getting worse and it looked like I’d never make it to Düsseldorf. I should probably make an appointment at the Bürgeramt and register in Duisburg, one person joked on Twitter after I shared some tweets about the journey.

Back at Duisburg I had no idea what to do, but eventually followed some people to the S-Bahn. I found one that went to Düsseldorf and hopped on along with what felt like the rest of the city.

The carnival music played for the whole hour-long journey, cementing it in my mind forever.

After nine hours of travelling I arrived in Düsseldorf, four hours later than expected.

On Monday I was ready for the big event – the Rosenmontag parade. I had been invited to join the Düsseldorf Tourism Board float where I would throw Kamelle (sweets) to the crowds lining the streets.

Taking inspiration from my Duisburg train friends I braided my hair and decided I would attend Karneval as climate activist Thunberg.

However, I didn’t really need to bother: there were colourful clown wigs waiting for us on the float.

I spent the first part of the day checking out the floats and speaking to locals.

Sonja Weyers and her friend Katharina Pitzer, who both looked amazing in clown make-up told me how important it is to get dressed up.

“You have to have a costume, it’s part of carnival,” said Sonja.

“That’s what the fun is all about. If you don’t wear one you’re the odd one out,” added Katharina. From babies who'd been transformed into bees to men dressed up as pregnant women and all other types of outfits in between, the Düsseldorfers went all out.

Ultimately, the spirit of carnival is about community.

“Rosenmontag is the highlight of our carnival session, everyone comes together and celebrates together, it doesn't matter where you’re from,” Sonja said.

If there’s one thing you have to be ready for at the carnival, it’s to shout the war cry “Helau!” possibly a million times during the course of one day.

“In Düsseldorf we say Helau!” said Sonja and Katharina.

Düsseldorf is known for its biting political floats, made by creative genius Jacques Tilly. No topics are off limits, from the coronavirus to the far-right, Brexit and Trump. One float was dedicated to the victims of the Hanau shooting attacks with the strong message that words can become actions emblazoned across it.

Ole Friedrich, managing director at the Düsseldorf Tourism Board, said: “There are so many people in a good mood, everybody is happy and we have these special wagons.  We are proud of it because these will go out to the entire world.

“We are the only Rose Monday with such satirical, strong political wagons.” After a few hours, our float began moving through the crowds and the sweet-throwing started. Children (along with quite a few adults) got really excited to catch some treats.

We travelled through the city and I was able to see some of the sights, such as the old town hall, while listening to carnival music and shouting Helau!

We finished the route just as it was beginning to get dark. The sun didn't come out the entire day but that didn't bother anyone in Düsseldorf one bit.

Melvin Böcher, of the online community Travel Dudes, summed it up: “The weather’s shit but it’s an amazing atmosphere.”

Rachel stayed at Hotel Friends Düsseldorf during her visit.