In 1964, the first jar of what we now call Nutella was sold from a bakery in Alba, Piedmont. Not long after, the chocolate-hazelnut spread would conquer the entire world.

But the unusual and sometimes controversial history of the world-famous spread might surprise even its most dedicated fans. Here are some of the most bizarre facts about Nutella, from its humble beginnings to world domination.

An “austerity recipe” with a long history

When Michele Ferrero, the son of a small town pastry maker, decided to follow in his father's footsteps, he started from humble beginnings. Nutella is sometimes called an “austerity recipe”, as at the time, in the 1950's, the Second World War and rationing had left chocolate in short supply in Italy.

Adding hazelnuts, which were cheaper and more readily available than cocoa, made the spread much more affordable. But it wasn't all the idea of Ferrero, the Turin-based makers of Nutella. In fact, the city has been known for producing hazlenut-infused chocolate since the times of Napeleon.

Hazelnut chocolate cream, or crema gianduia, was invented in the city in 1806, when Napoleon's wars in South America made cocoa beans so astronomically expensive in the Savoy kingdom that local chocolatiers were going out of business – until they hit on the idea of using local hazelnuts to make their chocolate go further.

Obviously, the Ferrero recipe was an even bigger hit.

Fifty years after that first jar, Nutella's inventor was ranked as the richest person in Italy and 30th richest in the world, according to the Bloomberg Billionaires Index. Michele Ferrero died the following year, leaving his widow Maria Franca Fissola the world's richest Italian, her wealth estimated at some €20 billion.

And Ferrero International keeps on growing, apparently unaffected by the economic crisis which has devastated many Italian businesses.

Ferrero called the initial version Pasta Gianduja, named after its Torinese ancestor. And it was first made in solid blocks, with the creamy, spreadable version only appearing in 1951. The amount of Nutella produced in a year weighs as much as the Empire State building, and the hazelnuts used to make the spread over a two-year period could fill a basket of the size of the Colosseum.

It almost caused a diplomatic incident

In addition to the countless arguments between spouses and flatmates over who finished the Nutella, the seemingly innocuous spread almost caused a fall-out between Italy and France.

In 2015, the French Ecology Minister, Ségolène Royal, said the Italian spread was unsafe for the health of her citizens and for the good of the planet.

“We have to stop eating Nutella,” she said on TV.

Royal's Italian counterpart responded, tweeting that she should “leave Italian products alone” and saying he planned to have “bread and Nutella for tea tonight”.

The reason for Royal's comments was that the Paris climate summit, taking place at the time, was raising awareness of environmental worries linked to palm oil production.

But you can now enjoy Nutella with a clean conscience: the palm oil used to produce the spread was later, in 2017, recognized by the European Parliament as a “Sustainable product”:

The Ferrero Company indeed has over the years demonstrated its commitment to environmental sustainability, and is a leading example for many other firms. In 2015, it joined the Palm Oil Innovation Group, and it supported the Amsterdam Declaration “In Support of a Fully Sustainable Palm Oil Supply Chain by 2020”. Not a suitable name for children

How much do you love Nutella? One French couple enjoyed the treat so much they tried to name their child after it – but their request was rejected in court. Judges said baby Nutella “risked being mocked”, so the parents instead had to settle for Ella.

What's in the jar?

You know about the chocolate and nuts, but there's much more to Nutella.

The hazelnut are cultivated in Italy and Turkey, and the company has also invested in the growing economies of countries such as Georgia, Chile, South Africa and Australia as up-and-coming producers.

Read also: The must-try foods from every region of Italy

A version of this article was first published in 2017

Since those first digs in the 18th-century site, racy images have been found in taverns, thermal baths and private homes, from huge erect penises to a statue with both male and female physical attributes.

It became clear that “this is a city where sensuality, eroticism, are ever-present,” Pompeii’s site director Gabriel Zuchtriegel told AFP as he stood in front of statues of bare-chested Centaurs.

The discoveries initially caused “dismay, embarrassment, and curiosity, and were seen by some as a great opportunity to think about the relationship with their bodies and nudity in a very different way”. 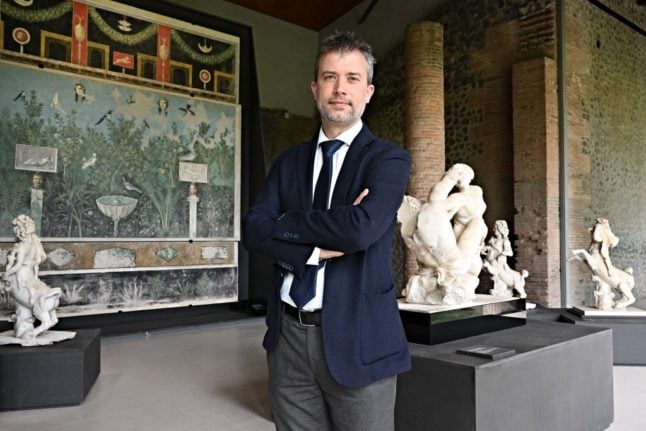 The Neapolitan King Charles VII, who financed the excavations, shut some of the more bawdy finds away in a secret cabinet in Naples, only showing them to those of proven moral standing, Zuchtriegel said.

That secret cabinet still exists today in the archaeological museum in the southern Italian city.

The exhibition, which runs until January 2023 and brings together some 70 works, begins with the vast erect penis on a statue of the god Priape – a Roman symbol of fertility and prosperity. 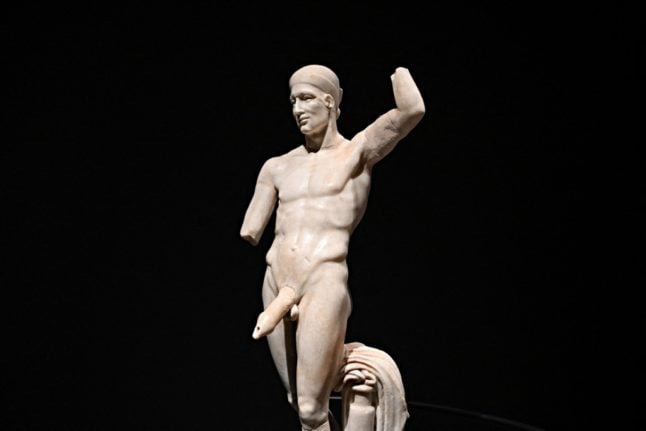 This photograph shows a “Statue-fountain of Priapus, symbol of prosperity” during a new exhibition in Pompeii’s site entitled “Art and sensuality in the houses of Pompeii”. (Photo by Andreas SOLARO / AFP)

Priape and his phallus was traditionally placed in the atrium, the large central hall of Roman houses.

Visitors are told this has nothing to do with eroticism, “though the modern imagination gives it this meaning”, says Tiziana Rocco from the Pompeii exhibition office.

The smirking of embarrassed tourists is proof enough of that, despite some wishing it otherwise.

“I think modern American culture is a little bit too prudish, and uncomfortable with the human body,” says Seattle tourist Daniel Berglund.

“It’s nice to see ancient culture that was more open and willing to display and glorify the human body,” the 40-year-old said as he lingered in front of paintings from a “cubiculum”, or Roman bedroom.

Various scenes are shown, including a man and a woman having sex. Further on, a series of oil lamps shine light on images to make pulses race – though the curators have not forgotten that some people will be bringing their children to the exhibition.

“Families and children make up a large part of our public,” says Zuchtriegel, who has put together an illustrated guide for them.

“The theme may seem difficult, but it is omnipresent in Pompeii, so it must be explained to children in one way or another,” he said.

In the guide, a centaur – a creature from Greek mythology that is half man, half horse – searches for a mate. 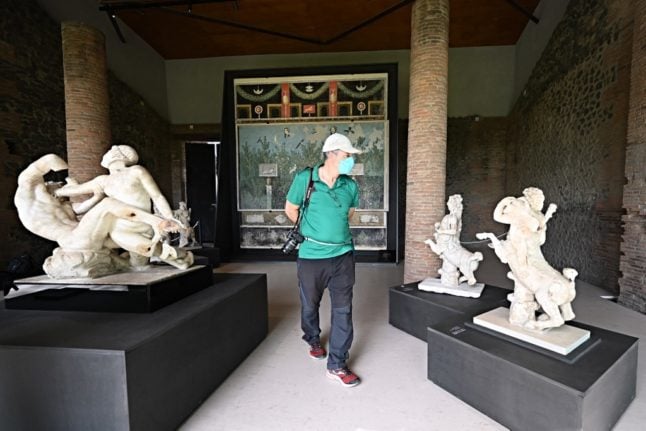 A visitor walks during a new exhibition in Pompeii’s site entitled “Art and sensuality in the houses of Pompeii. (Photo by Andreas SOLARO / AFP)

On the way he meets Narcissus, who fell in love with his own image, Dionysus, the god of wine, and Hermaphrodite, the child of Aphrodite and Hermes, who had both male and female sexual organs.