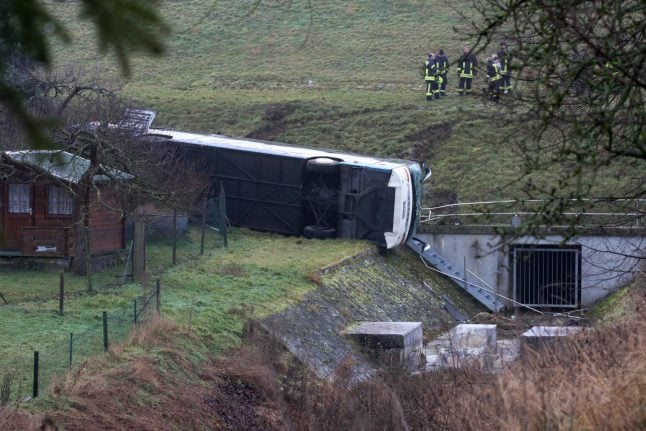 
Two children, both eight years old, were killed and five more seriously injured when a school bus slipped off an icy road into a ditch in central Germany on Thursday, officials said.

Local police said the bus had been carrying 22 children to their primary
school when the accident happened near the town of Berka in the state of
Thuringia.

The accident, which took place in the Wartburg district of Thuringia, happened after the bus came off the icy road at around 7:30 am Thursday morning.

The bus was travelling down a 12 kilometre route in order to reach a primary school in Berka vor dem Hainich, a municipality of about 800 residents, at the time of the crash.

It is believed the bus slipped on the ice because of a dip in the road, before toppling over an embankment and into a ditch.

Officials said the other 15 children on the bus were treated for light injuries and received psychological assistance.

“I am grieving for the injured children, and give my sympathy for their families,” tweeted Thuringia's minister president Bodo Ramelow (Die Linke/The Left Party).

Thuringia's interior minister Georg Maier said that there would be a
“detailed investigation” of the incident, but added that “today was not the
day for speculation”.

Separately on Thursday, nine children were injured in a similar incident near the Bavarian-Austrian border.

A police spokesman in Rosenheim said that a school bus had crashed into a tree in nearby Traunstein, for still unknown reasons.

He added that the driver had been seriously injured, while the children had sustained light to medium injuries.

Cable car survivor must be returned to family in Italy, Israel court rules

Grounded Finland ferry refloated and heading back to port