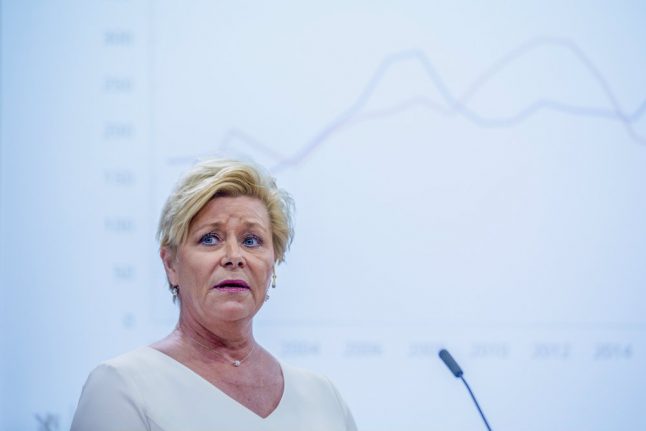 “I took Progress into government, I'm now taking Progress out again. I am doing this because it's the only right thing to do. We are simply not seeing enough of our politics implemented to justify further defeats,” Jensen said according to NRK.

Earlier on Monday, senior party figures held an extraordinary  meeting comes amid calls by a number of local party leaders for Jensen to take the group out of the government.

The background for the decision is Norway's decision to allow a woman linked with the Islamic State terror group back into the country on humanitarian grounds.

The Progress Party has strongly criticized the decision, arguing that that the risk of allowing a person linked to Isis into Norway outweighs the country's humanitarian duty to help the child.

Progress Party leader Siv Jensen previously told NRK that “the cup is full” in reference to her party’s working relationship with the Conservatives.

Solberg is scheduled to travel to the World Economic Forum in Davos, Switzerland tomorrow.

READ ALSO: What next for Norway's government after break-up of coalition?

“I have today informed the nomination committee in the Oslo Progress Party that I do not wish to be re-elected to parliament,” she said at a press conference at the Storting parliament.

“As such, I have also notified the party’s election committee that this, naturally, means the party must select a new leader at its national conference in May,” she continued.

Norway is scheduled to hold general elections later this year.

“It has not been easy to take this choice. But I am completely convinced that it is the right choice for both the party and me,” she said.

Jensen has already given her blessing to Sylvi Listhaug, the hardline former immigration and integration, and later justice minister, as her successor. Listhaug is the current deputy leader of the right-wing party.

“They are to outstanding politicians who dare to be innovative, clear, take on debates and challenge the existing truths,” Jensen said.

The former minister has been a member of parliament since 1997 and took over as Progress Party leader from Carl I. Hagen in 2006.

She was finance minister from 2013 until January 2020, when the Progress Party withdrew from the governing coalition.

Jensen said her party’s recent sluggish poll ratings were not rated to her decision to step back from politics.

“I have, in all my time as party leader, said that it is a job and lifestyle which demands 120 percent, 24 hours a day all year round,” she also said.