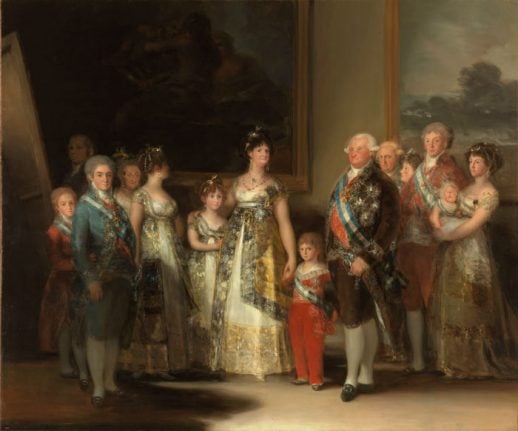 
The Prado is home to one of Europe’s finest collections of European art, including the work of Goya, Velazquez, El Greco, Rubens, Titan and Bosch. But it is vast and you don't want to miss anything.

You could spend days discovering everything Prado has to offer, but there are a few masterpieces and captivating gems that stand out as some of the best in European history.

This year, Museo del Prado in Madrid celebrates its 200th year so to celebrate, The Local has complied a list of the works you simply can’t go to Prado without seeing.

In this masterpiece, whose meaning scholars have been aruging about for over three centuries, Velazquez paints the Infanta Margarita with her meninas, ‘ladies in waiting’. Las Meninas may be one of the most analysed paintings in history, due to the mystery behind its meaning. One theory is that Velazquez, who can be seen working in front of a large canvas, is painting Philip IV and Mariana of Austria, who are reflected in back mirror, when the Infanta Margarita bursts in with her ladies in waiting. Another interpretation is that it is the king and queen who have just entered the room, although not everyone in the scene has noticed it yet. 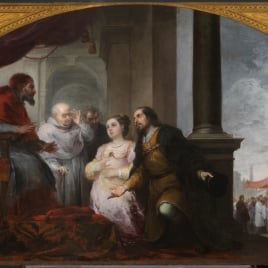 This scene narrates the founding of the Roman Church in Santa Maria Maggoire. The two strikingly large paintings are examples of masterly organised narratives, painted for the church of Santa Maria la Blanca in Seville.

El Greco – Nobleman with his Hand on his Chest 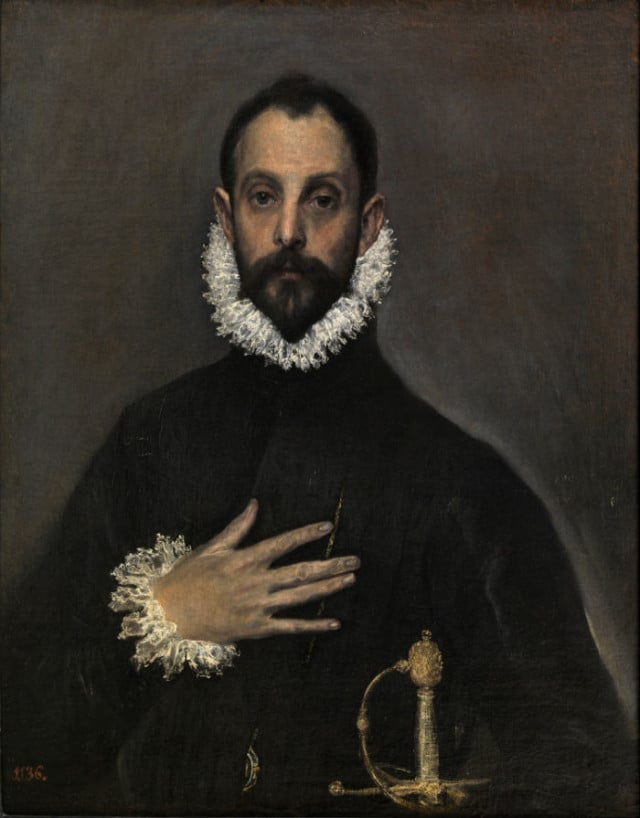 This work depicts the Spanish renaissance gentleman, although the indentity of the sitter is unknown. The natural gestures, the expressive gaze and attention to detail, for example has earned this painting the position of one of El Greco's most celebrated pieces of work.

Wife of King Ferdinand VII, it was Maria Isabel de Braganza who encouraged her husband to use the building, which was originally intended to house the Natural History Cabinet, for a national museum of paintings and sculptures. She stands in this painting in a red embellished gown, with her hand touching plans for the museum. 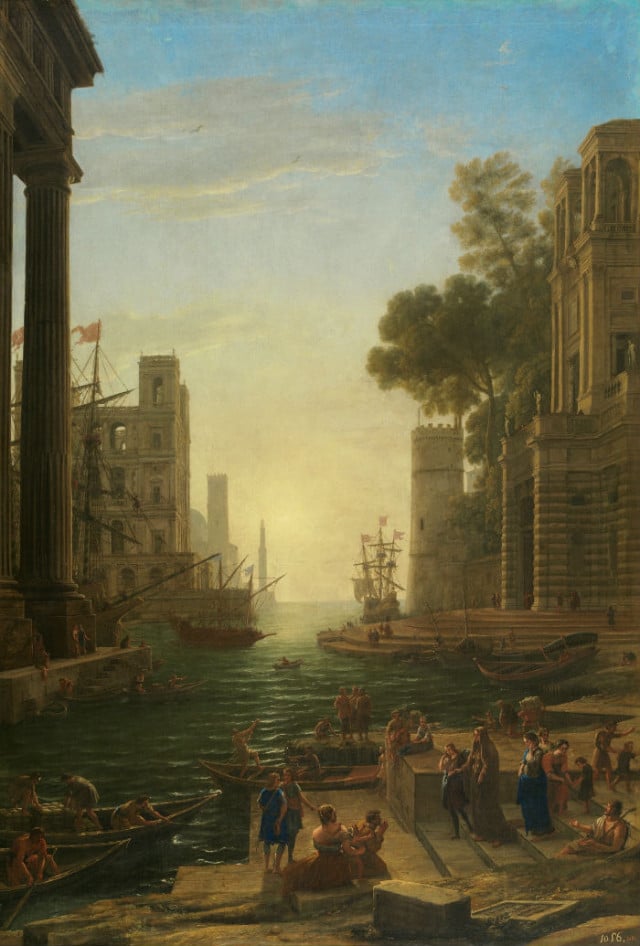 These four landscapes, which can be found hung in a line in the museum, capture the effects of radiant sunlight in various scenes with trees, mountains, water as well as people and buildings. The stunning portrayal of light at different times of day is captivating, especially if you take a step back and take in all four paintings at once.

Goya – The Family of Charles IV

This gallant, majestic display of bourbon power, was painted just after Goya was named First Chamber Painter. Royal splendour can be seen in beauty of clothes, the richness of jewels and emblems of rank, while the different personalities of each individual can be seen in their facial expressions.

Goya – The Clothed Maja and the Naked Maja

It is said that these two portraits originally hung in the home of Prime Minister Manuel de Godoy, with the clothed Maja covering the naked one, which could be revealed with aid of a pulley mechanism. The contrast between strong lighting and shadowy background is stunning, along with the finely painted silk pillows which show the illumination and softness of naked body. Both paintings were confiscated in 1813 for being too obscene.

These two works, which commemorate the victims of the uprising against Napoleonic troops, highlight insanity and irrationality of violence that leads to fights to the death with one day and one night scene.

Goya – The Threshing Floor or Summer

In this, one of Goya's more cheerful works displayed at Prado, summer is illustrated through the labours of harvesting wheat, resting, getting drunk and laughing. Take a wander around the second floor to find works by Goya and others with blue skies and the same lazy, summertime feel that is portrayed in The Threshing Floor. 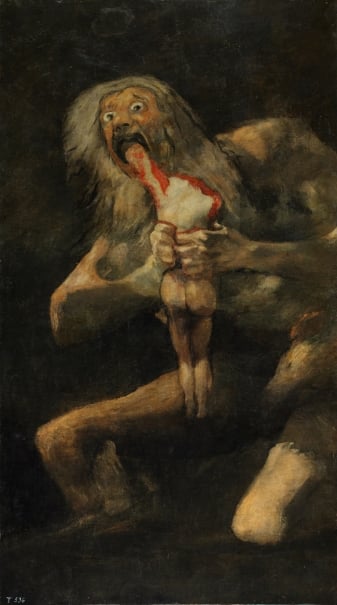 In serious contrast, on the ground floor you can find Goya’s black paintings, the sombre, almost harrowing collection whose meaning is still unclear. In this, on of the more powerful of the black paintings, we see Saturn devouring one of his sons, personifying the human emotion of loss of power.

This complex and enigmatic masterpiece is another of the more well-known works at Prado. It comprises of three scenes on the theme of sin, starting with Adam and Eve in the Garden of Eden, and ending in Sin’s punishment. Although over 500 years old, the painting portrays an almost futuristic vibe, with attention to detail that could be pondered over for hours. The work relates to false paradise over lust and the enjoyment in sinful pleasures.

The Three Graces, surrounded by flowers and countryside, are symbols of love, beauty, sexuality and fertility. The work gives a feel of joy and sensuality, perhaps inspired by the love happiness and pleasure that Rubens experienced in his second marriage.

Titan, Danaë and the Shower of Gold

This portrait commemorates Charles V’s victory over the Schalmalkaldic League at Mühlberg on April 24th 1547. It is a piece of political propaganda, which was part of the campaign intended to punish those who had revolted against their legitimate leader. The work echoes back to traditions of equestrian portraits in the Holy Roman Empire.

Drawing together biblical images and classical sources this powerful piece uses light, colour and contrast to illustrate the moment in which the human soul must decide upon its ultimate destination when the moment of death arrives. On the left is earthly paradise and on the right is purgatory with the blue riving running through the centre.

Check out this video by El País, in which the artwork from Prado is brought to life to celebrate 200 years of the museum:

The permanent collection of the Prado Museum is open between 10am and 8pm Monday to Saturday and 10am to 7pm Sunday’s and bank holidays.

Entrance is free for the last two hours before closing every single day.

Tickets can be bought in advance HERE. 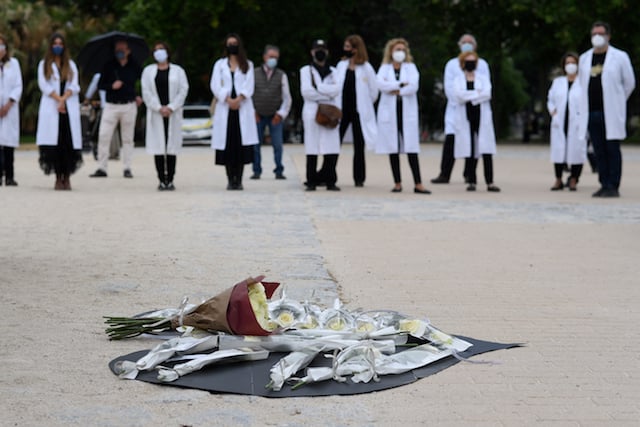 ‘The indignant ones’: Spain marks ten years since its ‘occupy’ protests