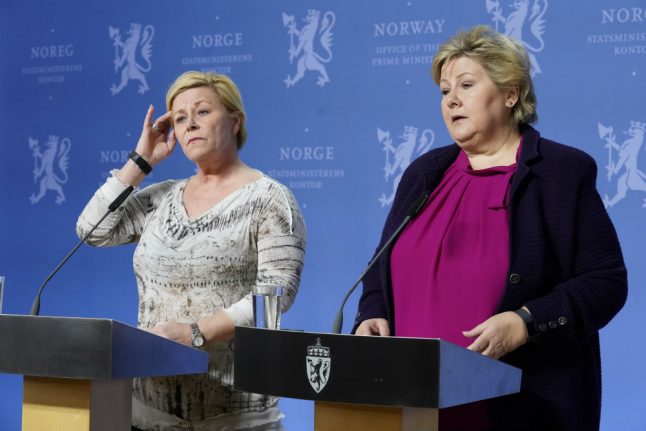 Norway said on Tuesday it was repatriating from Syria a woman linked to the Islamic State (Isis) group and her two children, one of them reportedly seriously ill, citing humanitarian reasons.

Prime Minister Erna Solberg came in for immediate criticism over the decision.

The anti-immigration Progress Party, a coalition partner to Solberg’s Conservatives, argued that the risk of allowing a person linked to Isis into Norway outweighs the country's humanitarian duty to help the child, effectively accusing Solberg of not making Norway's security her first priority.

Opposition deputy leader Hadia Tajik jumped on the remarks, saying that such a major disagreement is untenable between members of the same government.

“This issue shows, first and foremost, that Erna Solberg will truly swallow camels with backwards hair to stay in government,” Tajik told NRK.

Progress Party leader Siv Jensen told NRK that “the cup is full” in reference to her party’s working relationship with the Conservatives.

With local party representatives pressuring the Progress leadership to take a stand over the issue, Jensen is set to issue a set of demands to Solberg, should the PM wish to keep the coalition intact.

“We’ve has a good and thorough discussion. We were always skeptical about this,” Jensen said following a Progress Party leadership meeting on Wednesday afternoon.

“This [repatriating the Isis-linked woman and her children, ed.] comes in light of us long being denied support over our key issues, and we’re not in government for this. We think the Conservatives are being far too accommodating to the Liberals and Christian Democrats,” Jensen said, citing the two smaller coalition partners.

“That results in an overall grey and boring politics,” she added.

Jensen said that the populist party she leads was not prepared to remain in government “at all costs”.

The Progress Party will submit demands to Solberg over its future participation, she confirmed.

“It will then be up to Erna and the Conservatives to take it seriously or not. This must happen quickly, because the cup is now full,” she said.

Withdrawal from government by the Progress Party could potentially result in Solberg being forced to call an early general election.

Alternatively, the PM could attempt to renegotiate with Jensen. Here, a possible option would be for Solberg to continue as head of a minority government propped up by the Progress Party, whose support would be needed to pass legislation.

Although that is still some way ahead, NRK reported on Wednesday that regional Progress Party leaders are already set on leaving the coalition.

“It’s high time we left before the last of what we know as the Progress Party is gone. What is happening now is simply embarrassing. It’s hard for us genuine party members to see,” Dagfinn Henrik Olsen, leader of the party’s Nordland county branch, said to NRK.

On social media, Progress Party MP Roy Steffensen accused the government of “negotiating with a terrorist”.

The 29-year-old mother will be arrested on arrival in Norway, NRK has reported. That means a temporary guardian would be assigned to her two children, aged five and three, the broadcaster writes.

Meanwhile pressure on Jensen to make a drastic stand over the issue appears to be growing.

With the Progress Party scheduled to meet again to discuss its strategy at the end of the month, Solberg is likely to have to take steps within the next two weeks to placate her erstwhile closest parliamentary ally.

The meeting was held between the Ministry of Defence and the US embassy’s top official.

“The defence ministry held a meeting with the US embassy in Oslo today where we made it clear that spying on allies is unacceptable and unnecessary,” Norway’s Defence Minister Frank Bakke-Jensen said on Twitter.

The ministry said the US charge d’affaires — Richard Riley, according to the embassy’s website — was the person who attended the meeting with a senior Norwegian official.

The US embassy is currently without an ambassador.

In an investigative report on Sunday, Danish public broadcaster DR revealed together with several other European media outlets that the US National Security Agency (NSA) had eavesdropped on Danish underwater internet cables from 2012 to 2014 to spy on top politicians in Germany, Sweden, Norway and France

“I’m pleased that the Americans clearly said that they changed their practices in 2014 when it comes to the monitoring of allies, and that they want to cooperate with us and others to chart what happened,” Norwegian news agency NTB quoted Norwegian Prime Minister Erna Solberg as saying.

“We summoned the US embassy in Oslo today to follow up on this,” she added.

According to NTB, Solberg also held talks on Thursday with her Danish counterpart Mette Frederiksen.

“I reiterated that we consider espionage against close friends and allies unacceptable and unnecessary,” she said.

US eavesdropping on European leaders is, however, not new.

Among other things, the documents showed the US government was spying on its own citizens and carrying out widespread tapping worldwide, including of Merkel’s mobile phone.

However, if the Danish-US spying is confirmed, it went on during and after the 2013 Snowden affair.

In 2014, following the Snowden scandal, a secret internal working group at FE began looking into whether the NSA had used a Danish-US spying collaboration — called XKeyscore — to spy on Denmark’s allies, DR said.