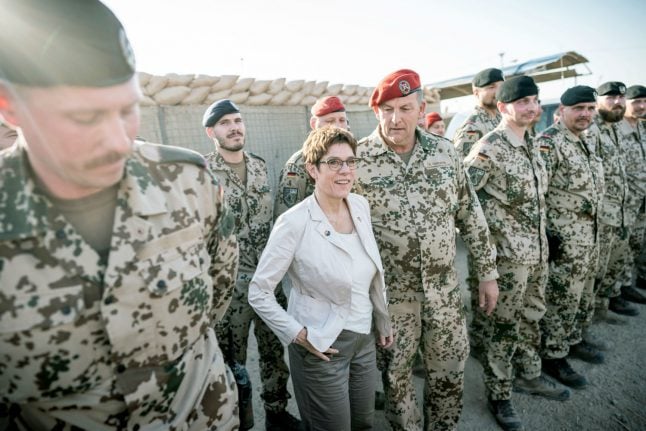 Defence Minister Annegret Kramp-Karrenbauer during a visit to Iraq in August 2019. Photo: DPA

A total of 32 German soldiers based in Camp Taji near Baghdad were flown by a military transporter A400m to the al-Azraq airforce base in Jordan, the German military said in a statement.

Three German soldiers stationed in Baghdad, the headquarters of the coalition fighting against the Islamic State jihadist group, were transferred to Kuwait.

“These troops can be brought back at any time if the training in Iraq is to resume,” the statement added.

“The safety of our soldiers remains a top priority.

Germany has deployed about 415 soldiers from its Bundeswehr (army) as part of the anti-IS coalition, with about 120 of its troops stationed in Iraq.

The move came after the Iraqi parliament passed a resolution asking the government to end its agreement with the US-led coalition.

A hugely popular figure in the Islamic republic, Qasem Soleimani was killed outside Baghdad airport on Friday in a drone strike ordered by US President Donald Trump, ratcheting up tensions with arch-enemy Iran which has vowed “severe revenge”.

On Tuesday, Iranian lawmakers voted to designate all US forces around the world “terrorists” over Soleimani's killing.

Foreign Minister Heiko Maas said late on Monday the basis for the Germany military presence in Iraq is “that we have an invitation from the Iraqi government and parliament.”

“If that is no longer the case… then the legal basis for us to be there is missing. We have to clarify this with those responsible in Baghdad as soon as possible.”

Chancellor Angela Merkel, France's President Emmanuel Macron and British Prime Minister Boris Johnson had in a joint statement on Sunday urged Iraq to not jeopardize a battle against IS jihadists.

“Preserving the (anti-IS) coalition is of great importance in this context.

“We call on the Iraqi authorities to continue to provide the coalition with the necessary support,” they said.

READ ALSO: German army to employ rabbi for first time in a century

Members of the German Armed Forces at a ceremony in Brandenburg. Photo: picture alliance/dpa | Fabian Sommer

The company, part of a prestigious battalion tasked with welcoming foreign heads of state, was “withdrawn” from active service in relation to incidents which occurred “in a far right context”, a spokesman for the German defence ministry said Friday.

The group is said to have participated in “perverse initiation and drinking rituals” and submitted new recruits to “sexualised violence”, according to the spokesman.

A witness told the German weekly Der Spiegel, which uncovered the affair, that within the battalion’s second company, at least six soldiers had formed a far-right group, calling themselves the “wolf pack”.

The head of the group is said to have aimed racial insults at other soldiers from minority backgrounds. A soldier at a rank equivalent to corporal is said to have worn a t-shirt with the slogan “Sonnenstudio 88”, a number which represents “Heil Hitler” in the neo-Nazi movement.

The alleged incidents “bring shame on us all”, the defence ministry spokesman said.

The German army, the Bundeswehr, will “pursue all legal means” to “remove” the culprits identified by other soldiers.

The German government has been worried for years about some soldiers, including those in the special forces, adhering to far-right groups.

The elite KSK commando force was partially dissolved in 2020 after munitions were stolen and members were seen performing a Hitler salute at a party.

In June, a platoon stationed in Lithuania was recalled after accusations of racist and anti-Semitic behaviour.