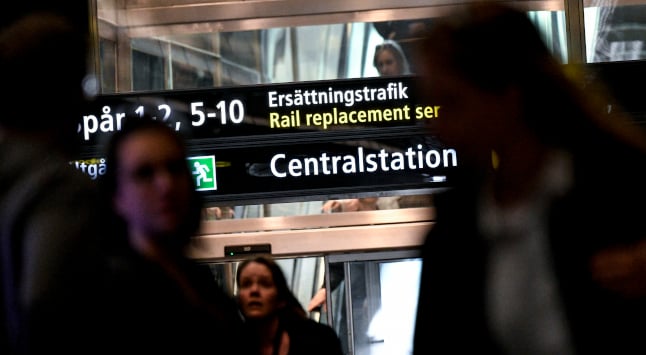 No trains were running between Malmö and Lund on Monday morning. Photo: Johan Nilsson/TT

A signal failure at Arlöv knocked out all train traffic between Malmö and Lund on Monday morning – one of the busiest train routes in Sweden on one of the year's busiest days for travelling.

Some trains were rerouted past Lund, but many were affected by delays. At 11.30am regional transport operator Skånetrafiken said traffic had resumed, but that knock-on delays were to be expected.

Four fully-booked trains operated by national service SJ were caught up in the travel chaos, with SJ not having any replacement buses available to call in.

“We are appealing to the Transport Administration to let us through, because some trains have been let through. We are keen that our travellers get to their destination today, better a bit late than not at all,” SJ press spokesperson Stephan Ray told the TT news agency earlier on Monday morning.

The four trains were later able to continue, but were all delayed. SJ said that it expected delays of around 30-60 minutes for some of its other trains, as a result of the problems earlier in the morning.

“All departures are fully booked, pretty much. There are lots of Christmas presents and luggage, so we obviously want to avoid having to stand still anywhere,” Ray told TT.