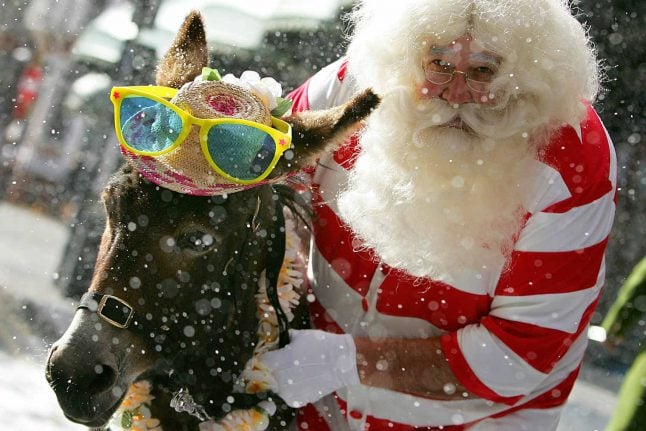 These days, Santa Claus has a relatively ubiquitous appearance all over the world in any place that celebrates Christmas (and a few that don’t).

In Switzerland however, not only does Santa – known in Swiss German as Samichlaus – have a few important differences – but so does the crew he likes to run with.

The Swiss expert panel is own its way #Eurovision #Samichlaus #Schmutzli pic.twitter.com/fEUADY5Mm8

From eschewing donkeys for reindeer to keeping company with a friend who in the coming years is likely to come under a little more scrutiny, Santa’s Swiss Squad in one of the most unique aspects of celebrating Christmas in Switzerland.

Most of us from the Anglo world have grown up with a jolly fat man in a red suit who traverses the globe through the air thanks to a team of well-lit reindeer.

Keeping things a little more simple and not wanting to play in any reindeer games, not only does Swiss Santa prefer to travel on the back of a less glamorous type of animal – but he’s got to keep his weight in check as well.

Never one to let the occasion get to them, Swiss animal protection law is also in force at Christmas time – so much so that there’s a weight restriction on anyone wanting to ride a donkey.

watch out for #krampus, or #schmutzli as he is known in #Switzerland https://t.co/IuMTI6tMsb pic.twitter.com/iwqf82p0At

If Santa’s down season has been a little too festive and he tips the scales at more than 90 kilos, Swiss law states he’s going to have to walk instead.

Given that most donkeys do not live at the North Pole but are instead rented out from hire companies for around 70 francs per hour, these rules are strictly enforced.

In some parts of the country, Santa will enter on the back of a pony or a llama, although in both cases we assume an even tougher weight restriction

Too fat to ride come December? Never fear – fortunately for the Santas of Basel, who ride into town on a Harley with a sack full of goodies, there are no such weight restrictions.

At this stage, we probably need to talk about Schmutzli, also known as Père Fouettard in the French-speaking areas.

Schmutzli, Santa’s sidekick, is a feature across much of Switzerland – although his appearance differs significantly depending on where he appears.

In his best incarnation, Schmutzli is a lovable grump with a disheveled and grubby appearance – his Swiss German name translates loosely to ‘dirty’ or ‘little dirty guy’ – who plays bad cop to Santa’s good cop, giving twigs to expectant kids and telling them to up their game.

Look at these happy faces. #Samichlaus and his helper #Schmutzli surprised our students of Primary and Secondary this morning. #CognitaWay #Zurich pic.twitter.com/sQ3FI9zKj2

Santa on the other hand gives out toys, fruits and snacks, leaving no doubt as to who the real hero is.

Schmutzil also used to carry a whip and an empty sack to steal naughty children, taking them back to a forced labour camp in the Black Forest until they learned to behave. While that appears to have gone out of fashion recently, some put the law abiding nature of the Swiss down to an existential fear of Schmutzli-related consequences.

In his worst incarnation in some of the more conservative and rural areas of the country, Schmutzli is not just grubby but may appear in pure blackface – something not too dissimilar from Holland’s Black Pete (Zwarte Piet).

Had a nice little visit from Santa today! Not sure who was more nervous me or my grandma?#tradition #santaclaus #Samichlaus #schmutzli pic.twitter.com/1KoTgZkQx7

While the Swiss incarnation has generated less controversy perhaps because of his backstory. The Dutch version wears blackface, earrings and oversized red lips because he is a person of Spanish/North African origin whereas the Swiss version’s blackface is down to being ‘dirty’.

In recent years however, Schmutzli has become less popular in larger towns and cities in the country, primarily because of the similar optics to blackface traditions in Holland and elsewhere.

Whether Schmutzli will go the way of forced labour camps for naughty kids remains to be seen, but it’s doubtful that Swiss Santa will be swapping his donkeys for reindeer any time soon.

Bizarre Swiss Christmas traditions #3: Get drunk on cake, but don’t “make it vomit”

CHRISTMAS
Quiz: How well do you know Brexit?