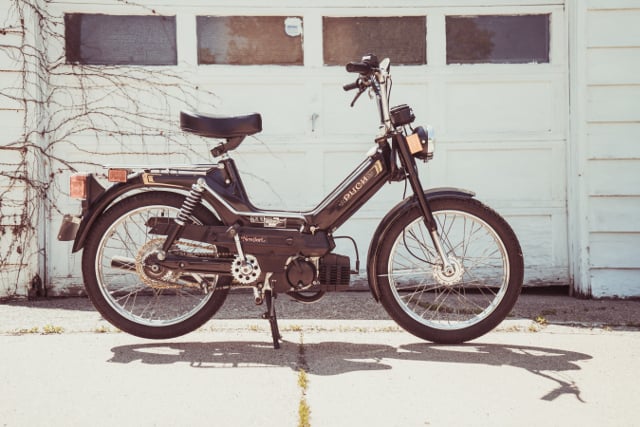 The word moped doesn't conjure up a particularly Swedish image, but the word itself comes from the Scandinavian nation.

The term is a shortened form of “trampcykel med motor och pedaler”, or “pedal bike with engine and pedals”. The full version isn't particularly catchy, so it's no wonder they shortened it. Santa takes his moped for a spin. Photo: Jens Meyer/AP

While the protective medieval glove known as gauntlet has French origins, the other word with the same spelling – as in, to run the gauntlet – has an entirely separate back story.

The second version is derived from the earlier English gantlope, taken from “gatlopp”, which as the Swedish speakers may already be able to tell, comes from Swedish “gata” (street or in the past, lane) and “lopp” (race, run, course etc).

It's thought that the Swedish term for this form of punishment through running between two lines of attackers passed into English during the Thirty Years' War, when Sweden and England were allies.

READ ALSO: 10 words you didn't know came from the Vikings The term orienteering has its origins in Sweden, where the navigational sport itself also comes from. In Swedish “orientera” means to orient (to position or find your bearings), from which the Swedish “orientering” is derived, and a small spelling change gives us the English term. In English this term can be used to describe anything which has a wide range (eg: a 'smorgasbord' of choices), as well as a kind of buffet, but it's the gastronomical meaning that gives away its Swedish origins.

Though often anglicized to smorgasbord, the original term is “smörgåsbord”, a compound of “smörgås” (now used for sandwich, but during Sweden's agricultural era it originally meant the piece of butter produced in the butter-making process which was most commonly eaten with bread) and “bord”, meaning table.

In Sweden, a smörgåsbord is a kind of buffet meal featuring a variety of warm and cold dishes.

READ ALSO: In search of the classic Smörgåsbord

This one may ring a bell for anyone who has worked in photography, film or TV, where tungsten lights are used to illuminate shoots with a warm hue (though these days LEDs are taking over). More generally it refers to a chemical element of the same name.

Translated literally from Swedish “tung sten”, meaning heavy stone, the term replaced the previous name for the element, Wolframite, in the 1700s. Though the term is more ubiquitous in Sweden, “ombudsman” is also used in English to describe an (often government appointed) official who looks into complaints by citizens against agencies.

It passed into English from Swedish in the early 1900s: “ombud” means agent or commissioner, while in this instance “man” has the same meaning in both languages.

A rare Nordic food found in English speaking countries beyond the confines of the Ikea cafe, “gravlax” – a contraction of “gravad lax” – is a kind of salmon cured by the not so healthy but oh so tasty combination of sugar and salt.

The Swedish term comes from the salmon (“lax”) once upon a time being placed in a pit then covered in order to induce a minor fermentation process which preserved it (known then as to “grava”). The salmon was eventually removed from its “grave” when it was ready to eat. Fitness fanatics may well be aware of “fartlek”, an exercise form which mixes short bursts of speed running with easy-effort recovery.

Though headlines like “nine ways to fartlek” may make you chuckle, the word has nothing to do with that. In Swedish, “fart” means speed, and “lek” play, so the combined “speed play” does a good job of describing the training method created by Swedish coach Gösta Holmér in the 1930s. Though the word itself may not look particularly Swedish, the scale used to measure temperature still makes the cut as it takes its name from Uppsala-born astronomer and physicist Anders Celsius, who came up with the Celsius temperature scale in the 1700s. We saved the most controversial to last. As countless articles, Youtube videos and other media produced in recent years prove, “lagom” has crossed over into the English world.

They may have you believe that everyone in Sweden swears to live their life by this motto of “just right” – an ethos of moderation supposedly governing Swedish society – but there's a decent argument for the opposite. It remains to be seen whether this term sticks around in English for the long-term, or dies a trend's death.

READ ALSO: Eight things in Sweden that aren't so lagom