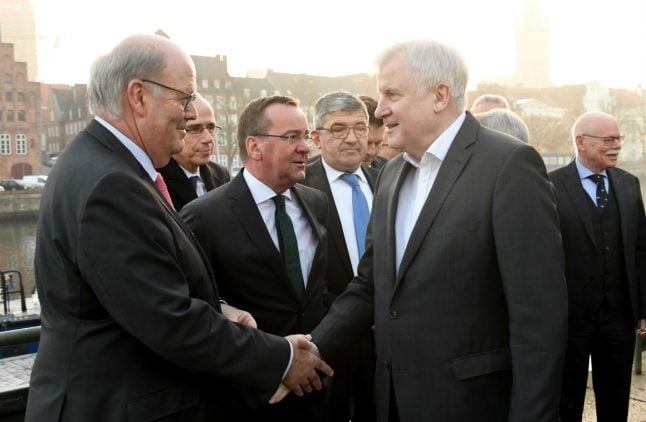 Horst Seehofer (left) greets his state colleagues at a conference on Thursday in Lübeck. Photo: DPA

The move has been pushed by conservative and far-right lawmakers following
a series of high-profile crimes involving migrants in recent years.

“The will to deport criminals to Syria as well as Afghanistan is there,” Joachim Grote, chairman of the conference of interior ministers and a member of Merkel's Christian Democrats, told reporters after a meeting in Lübeck in northern Germany.

But Grote admitted implementing the policy would be tough as Germany has “no contact person in Syria”.

A further complication is that each German state will have to debate the issue before deportations can resume.

Germany has put deportations to Syria on hold since the start of the conflict, which has killed 370,000 people.

The suspension has been extended every six months.

But major crimes have sparked calls for the policy to be relaxed in the case of criminals such as the 24-year-old Syrian man convicted for killing a German man in the eastern city of Chemnitz last year.

The murder led to protests by far-right groups.

Merkel, in power for 14 years, has been under pressure ever since 2015 when
she decided not to close German borders to a mass influx of refugees and
migrants.

The move earned her much praise but also sparked an angry backlash that
fuelled the rise of the anti-immigration and anti-Islam Alternative for Germany (AfD) party, which has been vocal in calling for deportations.

The Pro Asyl migrant charity said the deportation ban should be extended again “given the disastrous human rights and military situation in Syria”.

It called for “an indefinite extension” to the ban.

Germany's foreign ministry lists no region of Syria as safe on its website. 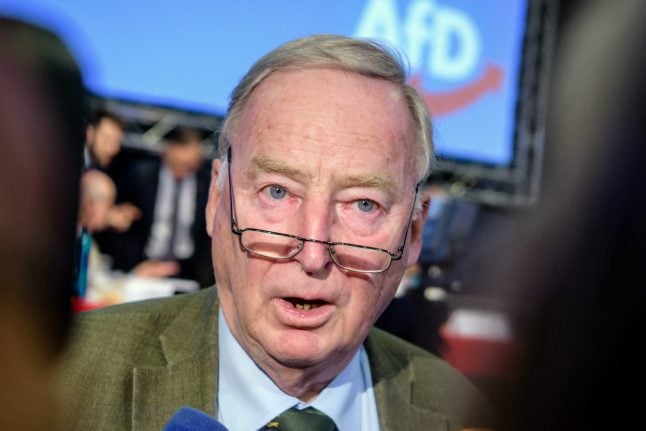 Alexander Gauland, a co-leader of Alternative for Germany (AfD) in Augsburg. Photo: DPA

According to the ‘Deutschlandtrend’ survey published by German broadcaster ARD, the SPD would take 17 percent of the vote, putting them third.

The Christian Democrats and its sister party the Christian Social Union (CDU and CSU) would achieve 28 percent of the vote – their worst result since the ‘Deutschlandtrend’ poll started in 1997.

Meanwhile, 9 percent of respondents of the survey would vote for the FDP, while the Left would receive 10 percent of the vote and the Greens 15 percent.

Overall, the coalition government of Union and SPD would receive 45 percent of the vote – meaning that a grand coalition majority government would not be possible.

Compared to the previous 'Deutschlandtrend' poll on September 6th, the Union and the SPD lose one percentage point each, the AfD increases by two percentage points, while the Greens and FDP each increase by one. The proportion of the Left has remained the same.

The Union's popularity dip comes against a backdrop of unsettled weeks, including unrest in Chemnitz involving xenophobic protests rallies after the death of a German man, allegedly by asylum seekers.

The case of Hans-Georg Maaßen, who led Germany's domestic intelligence agency, but was pushed out of the job and given another role in the Interior Ministry has also been major news in Germany, and attracted fierce criticism from the media.

Maaßen had questioned the authenticity of footage in Chemnitz, saying there was no proof that “hunting down of foreigners” had taken place, contradicting Chancellor Angela Merkel who had condemned the behaviour.

Meanwhile, Federal Interior Minister Horst Seehofer (CSU), appears to have been harmed by his involvement in the dispute over Maaßen. Only 28 per cent of respondents said they considered him as a good Interior Minister, down from 39 percent in April.

At the same time, the support for the 69-year-old is also dwindling considerably among Union supporters. Only 31 percent said they were still satisfied with his work, compared to 45 percent in April this year.

SEE ALSO: In depth – Is the AfD becoming too extreme?

The supporters of all other parties are mostly critical of the current leadership of the Interior Ministry. But Seehofer scored significant points among the supporters of the AfD. The poll found 61 percent of them were behind him, largely due to his stricter stance on migration, including not allowing refugees already registered in another EU country to enter Germany.

For the survey, Infratest Dimap polled 1,035 voters Monday through Wednesday and asked respondents to answer the questions as if Bundestag elections were taking place Sunday.

Strong approval for social housing
Before a housing summit in the Chancellor's Office on Friday, respondents were also asked their views on the most effective measures to relax the rental market.
Almost half of eligible voters (46 percent) believe that more money for social housing is the most effective public measure to ease the situation on the rental market.
Every fourth citizen (26 percent) believes in the effectiveness of the rental price brake (rent control), while 13 percent of respondents said a stronger promotion of private housing would be useful.
A total of eight percent said direct financial support to tenants through housing allowance would be an effective measure against accommodation shortages.
SHOW COMMENTS
Url copied to clipboard!