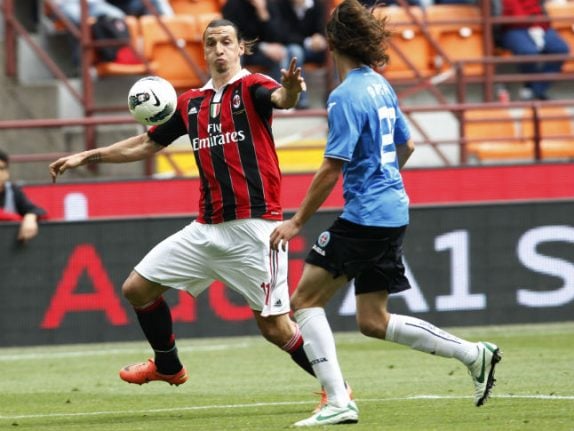 Swedish footballer Zlatan Ibrahimovic playing with AC Milan back in 2012. Photo: Luca Bruno/AP/TT
The 38-year-old striker confirmed his departure from Los Angeles Galaxy last week following the club's elimination from the Major League Soccer playoffs.
Gazzetta dello Sport and Sky Sports Italia reported that the former seven-time European champions have now made contact with the player's agent Mino Raiola.
The US-owned club want the former Swedish international for six months and are prepared to pay him six million euros ($6.6 million) if he remains for 18 months in total, Gazzetta claimed.
Milan finished fifth last season, missing out on a return to Champions League football by just a point to city rivals Inter.
They have had a poor start to this campaign and are 14th after 12 games before they host last year's runners-up Napoli on Saturday in the San Siro. Ibrahimovic played for two seasons between 2010 and 2012 with AC Milan, helping them to their last Serie A title, and scoring 42 goals in 61 league appearances.
He also won three league titles with Inter Milan, and two with Juventus, which were both revoked following the 'Calciopoli' match-fixing scandal.

Zlatan Ibrahimovic celebrates after scoring a goal in September. Photo: Miguel Medina/AFP
Milan confirmed in a statement that the Swedish striker had “tested negative” twice in a row, as stipulated in the protocol to be able to lift the quarantine procedure.
Ibrahimovic, 39, sounded a more triumphal note on his social media: “You are cured! The health authority says the quarantine is over, you can go out!”, he wrote on Twitter.

The announcement comes a day after Milan said Ibrahimovic had tested positive a second time for Covid-19, putting in doubt his participation in the Milan derby on October 17.
Ibrahimovic first tested positive on September 24.
The derby remains in doubt with two other Milan players and five from Inter currently in self-quarantine.
In spite of his absence, Milan have made a decent start to the season, having climbed to second in Serie A after winning all three of their games and reaching the group stages of the Europa League.
SHOW COMMENTS
Url copied to clipboard!