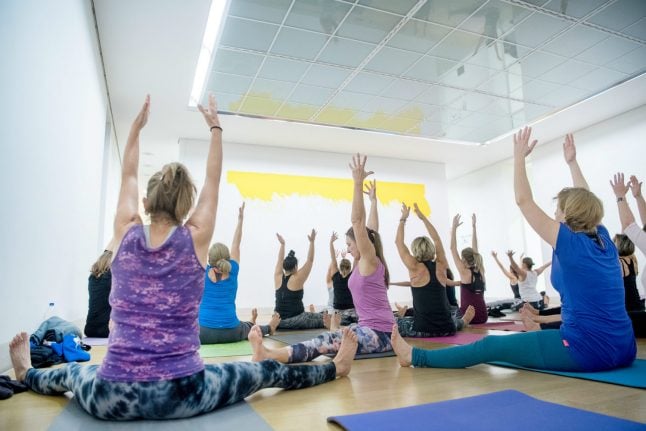 If you find yourself joining a Verein or a club you are really embracing the German way of life. Photo: DPA

Anyone who moves to a new country knows it takes a lot of effort to get out there and make new friends.

But as well as connecting with new people, you'll probably notice some of your actual social life habits change too.

Here's what you should look out for as you adapt to life in Germany.

READ ALSO: 'Keep putting yourself out there': The best ways to make friends in Germany

In your home country, it may have been the norm to buy rounds of drinks for your table of friends when you’re in the pub. But in Germany this is quite rare.

Perhaps it's because Germans have a reputation for being savers and more thrifty with their cash. Whatever the case, they tend to prefer to pay their own way. That's not to say that someone will never buy you a drink or a coffee in Germany; it just means that it's a less common way of socializing.

Especially in the UK, you may be familiar with the ‘kitty’ custom too, where each of the group gives an amount of cash, say €20, and you use that to buy rounds of drinks until it runs out.

But that’s not really done either. It's a similar thing when you go out for a meal – you'll likely pay for what you had, rather than split it evenly (unless you're a close group of friends and everyone has had a similar thing).

So don't be offended if someone doesn't offer to buy you a drink – it's just not part of the culture. Also, it does mean that you can better control how much you spend on an evening out.

Here's another thing you might get used to while living in Deutschland: buying a beer to take for the road. Opting for a “Wegbier”, which literally means a “go beer”, will see you sipping a Pils or Radler while walking home, on the way to a party or really just whenever you’re on the go.

It’s possible because drinking outdoors is not illegal or frowned upon in Germany. In Berlin, for example, late-night shops (known as Spätis, from Spätkauf), sell alcohol which people drink while sitting on benches or gathering with friends.

But you can buy your “Wegbier” anywhere you like.

In other countries you might have had to sneakily hide your beer if you dared drink it in public (or it could have been confiscated by police). There is none of that in Germany.

In fact, I’ve met people who say they moved to Germany because drinking in public is legal and they enjoyed that part of the culture so much.

READ ALSO: 'It's difficult to make new friends': Germany ranked one of hardest countries to settle in

You toast to everything

Germans really love a good toast and will raise their glass to just about anything: every time a new drink is bought, if someone says something important or just to be social.

When saying “Prost!” remember to bump your glass gently with everyone at your table (or at least toast your glass in the air towards someone if they are sitting too far away), and don't forget the eye contact, which is very important.

On that note, it's probably worth saying that drinking moderately is encouraged. Consuming alcohol in Germany is viewed as a very social thing, it's not just about getting a drunk as possible.

Work and leisure are separate

Unlike in some other cultures where it can be the norm to socialize with your workmates when the day ends, in the likes of a restaurant or bar, this just isn’t really the case in Germany.

Of course, there are some exceptions (especially in the startup scene where part of your job description is probably to socialize with colleagues), but overall Germans tend to try and keep some distance between their work and personal life.

Perhaps it's because privacy and work-life-balance are viewed as very important and by socializing with workmates these lines can get blurred.

You get used to people smoking indoors This one is really annoying. Germany does have a smoking ban but it's far more relaxed than most other western European countries.

That means when you go out in some bars, you have to deal with plumes of second-hand smoke. Apart from it feeling like you're stuck in the1970s, you also have to wash all your clothes after a night out and it can take days to get the smell out of your hair.

And then there are the sore throats or irritated eyes that come with a night spent in a smoky bar. Try and avoid the Rauchen (smoking bars) if possible, but when you're trying to make new friends you might feel like you have no choice but to visit them.

The importance of time

It's a stereotype that Germans are always on time. But compared to some other cultures, it is true that Germany places a great deal of importance on punctuality.

If your German friends invite you round for dinner it would be quite rude to turn up 30 minutes or an hour late. It's best to arrive at the time you've agreed with the person or host you're meeting.

If you're running late, let them know so they don't think you're being rude.

READ ALSO: 15 timely phrases that prove Germans are all about punctuality

Clubs or associations (Vereine) are a huge part of German culture so if you've joined one then you are well on your way to becoming fully integrated.

There's a Verein for almost everything, whether it's a sports club for martial arts, yoga or swimming, or a craft-themed one.

It's a great way to expand your social group and be creative or stay healthy, whatever club you've chosen.

You say what you mean

Ever said you'd meet someone for a drink but never actually planned to go through with that? Yup, we've been there too. Perhaps it's over politeness (especially in British and American culture).

But in Germany there's less chance of this happening because people really do say what they mean. If you plan to meet someone for a coffee you'll say it. If not, then you won't just say it to appear friendly.

When you start being direct and saying what you mean, you're definitely an adopted German.

Being naked with friends doesn't freak you out For many cultures, it's hard to believe that you could comfortably be in the nude with your colleagues, friends or family. But people in Germany tend not think of nudity as a big deal.

Take the saunas: Germans will often have no qualms about getting their kit off and enjoying the warmth of the sauna in winter. Many people will even head to a spa with their friends or colleagues and they won't even think it's weird to be naked in front of each other.

This is unimaginable in many other countries, but it's a part of German culture that is quite refreshing.

READ ALSO: The truth laid bare: What you need to know about sauna culture in Germany

With over 100,000 Indians in Germany, and over 175,000 people of Indian descent, it’s little wonder that Diwali – the famous five day Hindi festival of lights starting this year on Monday October 24th – is being celebrated all around the Bundesrepublik.

READ ALSO: Indians in Germany: Who are they and where do they live?

Even the House of Parliament in Frankfurt is honouring the holiday for the first time with a special reception on October 30th.

Diwali takes its name from the clay lamps or deepa (the event is sometimes called Deepawali) that many Indians light outside their home. With the days shortening in Germany, there’s all the more reason to celebrate light — especially over lively music, traditional dance and authentically spicy Indian cuisine.

We have rounded up some of the top events to celebrate around Germany, both the week of Diwali and afterwards, stretching into mid-November. If you have an additional event to suggest, email us at [email protected]

Happen to be in Heidelberg? Then it’s not too late to head to the Sweet Home Project, which will be cooking up a storm starting at 6:30pm. The menu includes an assortment of Indian sweets and savoury dishes. The collective only asks that participants bring along a candle (and a hearty appetite).

If you miss this event, and are still craving some (really) spicy traditional cuisine, the Firebowl Heidelberg is hosting a Diwali party on October 29th, replete with lots of food and drink and Bollywood beats the whole night.

For those who fancy a Feier with a full-buffet, this celebration in Dreieich delivers through an all-you-can-eat dinner with traditional fare. Starting at 5pm and stretching into the early hours of the morning, the festive feast includes traditional Bollywood music by Derrick Linco. There’s also a dance party for kids, who receive free admission up to seven years old and €25 up to 14 years. Normal tickets go for €40 per person.

On November 4th at 6pm, the Deutsch-Indische Gesellschaft Düsseldorf will be hosting a family-friendly party in nearby Ratingen with classical Indian music and dance, a huge dinner and Bollywood music led by DJ SA-ONE. Tickets cost about €40 each, but children under six receive free entry.

The Indian Students Association of Bonn-Cologne will be hosting its biggest event of the year: for €10, event goers can try an array of Indian food, play classic games and tune into cultural performances.

READ ALSO: Moving from India to Munich changed my life

Whether you like traditional bhajans or meditative ragas, this concert will capture many of the classic sounds of Indian music with artists such as Anubhab Tabla Ensemble, Debasish Bhattacharjee and Somnath Karmorak taking center stage. The performance starts at 5pm and costs €10.

November 12th and 13th in Berlin

Indian food fans will get to enjoy 12 stands devoted to Indian cuisine and products, all coming from the local Indian community. The weekend-long festival will also include stand-up comedy from the Desi Vibes Comedy Group. Karaoke fans will also enjoy singing along with the Sounds of India group, followed by an after party on Saturday. All this only costs €2 at the door.