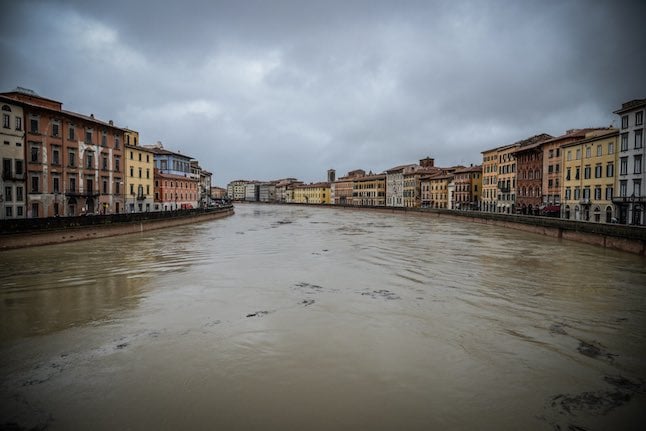 The River Arno in Pisa, where bridges were closed because of the flood risk. Photo: Esercito Italiano/Twitter
The Local Italy
[email protected]
@thelocalitaly


Floods in Venice may have dominated the international headlines, but they're not the only weather emergency to strike Italy this week.

As the waters in Venice began to recede, elsewhere in Italy the chaos continued as the River Arno surged to alarming levels in Tuscany and heavy snow left thousands without power in South Tyrol.

Parts of Veneto, including Venice, are on lower orange alert, as is the province of Bolzano in Alto Adige (South Tyrol).

Another eight regions from north to south – most of the country in fact – are on yellow alert. 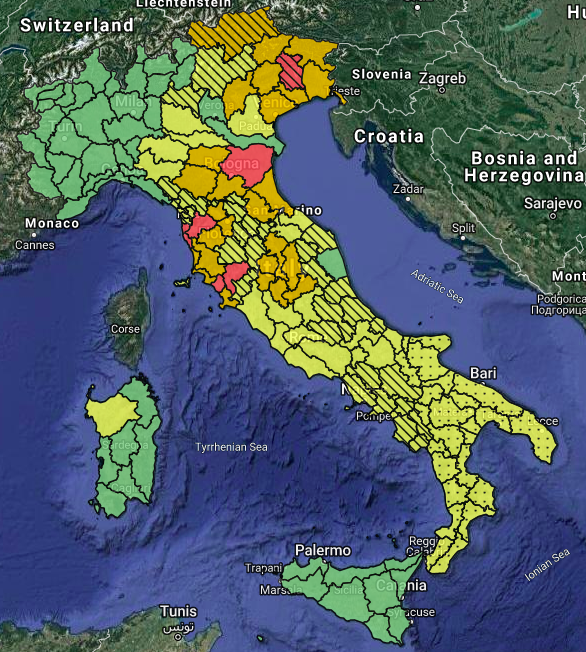 Authorities in Tuscany were monitoring the Arno as heavy rain caused the river to rise dangerously near the top of its banks, though reports on Monday said the water levels were finally beginning to fall.

In Pisa, the army was called in to reinforce flood barriers and bridges in the city centre were shut from Sunday evening.

The council ordered schools, universities and businesses to stay closed on Monday morning, as images showed the river dramatically above its usual height.

In Florence, which has had over 62 millimetres of rain in the past 24 hours, civil protection units were advising people to avoid the banks of the Arno as more than 2,000 cubic metres of water surged through the city each second.

This video sent to me today by my friend @LostNCheeseland actually gave me chills. I hope the rains take a break in #Tuscany. pic.twitter.com/Rf4ZaMiaR9

Firefighters said they had carried out nearly 400 rescues in Tuscany since Saturday night, including searching by hovercraft for one person swept away by the current in the province of Grosseto who was found clinging on to a tree.

Meanwhile the fire service said it had carried out another 450 rescues in Emilia-Romagna, where the River Idice burst its banks. Regional president Stefano Bonaccini called it a “historic flood” and said he would be calling for the declaration of a state of emergency.

An estimated 10,000 residents suffered gas and power cuts on Sunday, while hundreds were evacuated.

Further north, 11,000 households were left without power in the province of Bolzano in South Tyrol, which has seen up to 150 centimetres of snow.

Some 50 roads are closed, leaving many towns cut off especially in mountain areas, while at least one avalanche was reported and the risk of others following was raised to four out of five.

A landslide early on Monday morning caused a train to derail near Rio di Pusteria, prompting the closure of the line through the Puster Valley. No one was injured.

In Rome, now into its second week of near daily thunderstorms, at least two cars were hit by falling trees, one injuring a 23-year-old driver who was rushed to hospital.

Rains and wind have toppled several trees and branches, as well as leaving the capital's notoriously poor roads underwater.

Authorities have closed parts of the banks of the Tiber as a precaution and are monitoring the river for flood risks.

Strong winds and rough seas were also reported in several towns along the coast of the surrounding Lazio region, with the mayor of Fiumicino – home to Rome's main airport – calling the situation “disastrous”. Entire beaches had been washed away, Esterino Montino said.

Outside the city the River Volturno burst its banks, forcing one 74-year-old hunter to flee to a narrow area of high ground with his dog before forest police rescued them.

Flooding was also reported in Naples, especially in the Rione Sanità neighbourhood, where streets and houses have now been submerged by rainwater for several days.

The island of Ischia in the Gulf of Naples suffered severe damage from stormy seas, which smashed into trees, benches, lampposts, deckchairs and even a restaurant terrace near the island's popular beach resorts. The walkway that leads to the Aragonese Castle, one of Ischia's most-visited sights, was also hit, causing part of it to collapse.

Local mayor Enzo Ferrandino has requested that the storms be declared a natural disaster, urging: “I hope the state gives our area the same attention that it reserves for other parts of Italy.”

In total, Italy's firefighters say they have carried out 8,000 rescues the length and breadth of the country in the past week.

The past seven days have seen Italy hit with extreme weather from north to south, beginning with thunderstorms, hail and tornadoes in the southern regions of Sicily, Calabria, Basilicata and Puglia.

There were especial concerns for Matera in Basilicata, like Venice a Unesco-listed city, which suffered unprecedented floods. The damage is expected to cost around €8 million to repair, a sum that the cash-strapped region has asked the national government to help cover.

The storms are estimated to have caused tens of millions of euros of damage to Italy's agriculture and fishing industries, as rain and wind sweep away crops and rough seas force boats to stay in port.