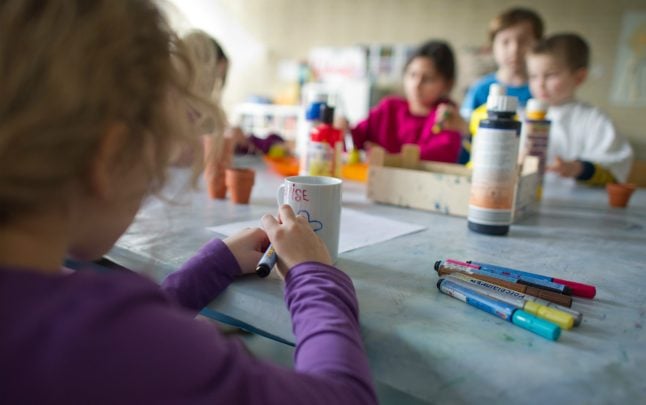 Germany’s grand coalition plans to introduce a legal right to an after-school care space for all children in primary schools.

From 2025, the government wants to see these youngsters have the right to care that lasts until the end of the working day. A special fund totalling €2 billion has been set up to fund the initiative.

The cash boost is earmarked for states and local authorities to invest in Germany’s 15,000 primary schools or build more premises for all-day services.

Currently, after-school care is set up in schools but spaces fill up fast and children often miss out on places, meaning parents have to work fewer hours or opt for more expensive private care.

READ ALSO: Why are parents suing for a childcare spot in Germany?

The legal changes, which will then pave the way to the actual legal entitlement to all-day places, will be initiated at a later date. Merkel’s conservative Christian Democrats (CDU) and the CSU along with the centre-left Social Democrats (SPD) had previously agreed to introduce these measures by 2025 to improve the compatibility of family and career.

In an interview with German daily Die Welt this week, Family Minister Franziska Giffey said that in addition to reconciling work and family life, it was about offering children the chance to do something stimulating after school.

The SPD politician estimates that 75 percent of primary school children need an all-day place and that up to one million additional places would have to be created at the schools.

There is a particular backlog for demand in western Germany. Eastern regions are less affected, partly because state child care was already the norm in East Germany, where the idea of working women was part of the model of socialist society. The infrastructure remained in place after reunification.

“While traditionally more than 90 percent of children in the east have the possibility of an all-day school place, in the west it is only 30 percent in some cases,” Giffey said.

READ ALSO: How a childcare crisis is leaving Berlin parents stuck at home with their kids How does after-school care work in Germany?

In Germany, before-and after-school care is typically provided by on-site ‘school clubs’ (Hort), usually only available to children attending the school in question, or at an off-site premise.

Day care is typically organized by the individual school, and will provide services based on local demand and facilities available. It would usually close between 4 and 6pm depending on the facility.

Fees for before or after-school care are usually fairly reasonable; however this will vary depending on the facilities offered (for example if meals are given too), the number of hours and competitiveness of the region.

'Children have right to high-quality care'

The German Confederation of Trade Unions (DGB) welcomed the move to bring a legal right to all-day care for children but warned it could fail due to lack of staff.

The legal right to full-day care is a milestone in social and educational policy, “but children and parents also have a right to a high-quality childcare place,” Hannack said. “It is therefore important that this legal right is guaranteed by well-trained specialists.”

According to calculations by the German Youth Institute (DJI), significantly higher investments than the planned €2 billion will be needed before the legal entitlement can be enforced.

In order to actually cover the expected demand for places from 2025, the institute estimates that €5 billion is needed.

They said that was because new population projections by the Federal Statistical Office show there will be a significantly higher number of primary school-age children in the coming years than expected.

The DJI puts the current operating costs for all-day care from 2025 at around €3.2 billion per year.

Germany to improve childcare in Kitas

Childcare has been receiving a boost in Germany in recent months. As the Local recently reported, Germany's 16 states are set to receive a share of about €5.5 billion from the government over the next three years for daycare centres (Kindertagesstätte or Kita for short).

They want to provide a higher quality of pre-school education for youngsters, reduce the costs of childcare for families, as well as decrease the burden on working parents.

According to popular searches, Germany is the go-to place for good coffee and bread (although only if you like the hard kind) and the place to avoid if what you’re looking for is good food, good internet connection and low taxes. Of course, this is subjective; some people will travel long stretches to get a fresh, hot pretzel or a juicy Bratwurst, while others will take a hard pass.

When it comes to the question on the bad Internet – there is some truth to this. German is known for being behind other rich nations when it comes to connectivity. And from personal experience, the internet connection can seem a little medieval. The incoming German coalition government has, however, vowed to improve internet connectivity as part of their plans to modernise the country.

There are also frequent questions on learning the German language, and people pointing out that it is hard and complicated. This is probably due to the long compound words and its extensive grammar rules, however, as both English and German are Germanic languages with similar words in common, it’s not impossible to learn as an English-speaker.

Here’s a look at some of those questions…

Why is German called Deutsch? Whereas ‘German’ comes from the Latin, ‘Deutsch’ instead derives itself from the Indo-European root “þeudō”, meaning “people”. This slowly became “Deutsch” as we know it today. It can be a bit confusing to English-speakers, who are right to think it sounds a little more like “Dutch”, however the two languages do have the same roots which may explain it.

And why is Germany so boring? Again, probably a generalisation, especially given that Germany has a landmass of over 350,000 km² with areas ranging from high rise, industrial cities to traditional old town villages and even mountain ranges, so you’re sure to find a place that doesn’t bore you to tears.

Perhaps it is a question that comes from the stereotype that Germans are obsessed with strict about rules, organised and analytical. Or that they have no sense of humour – all of these things being not the most exciting traits.

Either way, from my experience I can confirm that, even though there is truth to German society enjoying order and rules, the vast majority of people are not boring, and I’m sure if you come to Germany you’ll meet many interesting, funny and exciting people.

When it comes to the German weather, most people assume a cold and cloudy climate, however this isn’t entirely true. While the autumn and winter, especially in the north, comes with grey skies and sub-zero temperatures, Germany can have some beautiful summers, with temperatures frequently rising above 30C in some places.

Unsurprisingly, the power and wealth of the German nation is mentioned – Germany is the largest economy in Europe after all, with a GDP of 3.8 trillion dollars. This could be due to strong industry sectors in the country, including vehicle constructions (I was a little surprised to find no questions posed on German cars), chemical and electrical industry and engineering. There are also many strong economic cities in Germany, most notably Munich, Frankfurt am Main and Hamburg.

READ ALSO: Eight unique words and phrases that tell us something about Germany

Why are Germans so tall? They are indeed taller than many other nations, with the average German measuring a good 172.87cm (or 5 feet 8.06 inches), however this may be a question better posed to the Dutch, who make up the tallest people in the world.

Why are Germans so smart? While this is again a generalisation – as individuals have different levels of intelligence in all countries – this question may stem from Germany’s free higher education system or their seemingly efficient work ethic. Plus there does seem to be some scientific research behind this question, with a study done in 2006 finding that Germans had the highest IQ in Europe.

So, while many of the questions posed about Germany and Germans on Google stem from stereotypes, we can confirm that some aren’t entirely made up. If you’re looking to debunk some frequently asked questions about France and the French, check out this article by our sister site HERE.