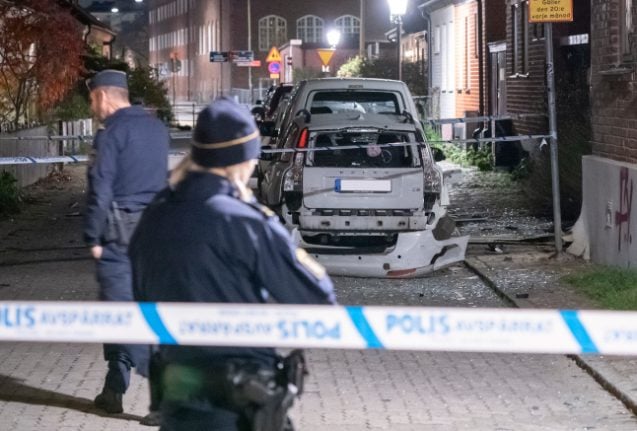 An explosion in Malmö in the early hours of Friday. Photo: Johan Nilsson/TT

In the early hours of Friday, police were sent out to an explosion in central Malmö. Windows were shattered, a car damaged, but no one was injured. Three suspects were held shortly after the blast.

Just a couple of hours later police were called out to a blast in Växjö. The same morning a car was demolished in a blast at a car park in Landvetter, Gothenburg. No one was injured.

They were the latest incidents in a trend that has so far seen twice the number of explosions in Sweden this year as the same period last year. The Local investigated what's behind the blasts in this article this week.

“If you also compare to other countries in Europe and the world that are as developed as we are, we stick out,” Ylva Ehrlin, national bomb squad analyst, told Swedish news agency TT on Friday.

HAVE YOUR SAY: Has gang crime had an impact on your life in Sweden?

The bomb squad is also called out to suspected bombs that are discovered before they detonate. So far this year there have been 76 such cases, according to Ehrlin's breakdown of the statistics.

“It's an unacceptably large number,” she said.

“This is an undesirable development. It is very serious, a social problem. You can't just remove the explosives and the tools, you also have to find the cause. In the past there were shootings, now we've got explosions.”

There have been no deaths linked to the blasts in the past year, but several injuries.

In December 2018 a teenager almost died in a blast in Malmö, for which he was later charged on suspicion of being behind the explosion. In September 2019 a female student was seriously injured when she happened to walk past an explosive device just as it detonated in the street in Lund.

The blasts vary in size, and many of them are minor. But a major explosion in Linköping earlier this year was described as 30 to 40 times as big a charge as previous attacks, with around 25 people lightly injured and police saying it was a “miracle” no one was seriously hurt. But Ehrlin believes it may just be a matter of time.

“The risk is very high. We have so far been incredibly lucky, you just don't have that kind of luck. Take the explosion in Linköping for example. It is incredible that no one has died,” she told TT.

She argues that the explosions are more dangerous for bystanders than many other crimes.

“You control a weapon until you fire it, and you're usually aiming at the intended target. You don't control an explosive charge in the same way, especially not if you are a criminal without knowledge of the area. You don't have any control over the target and the effect,” said Ehrlin.

Read more about the criminal networks and the explosions here.

CRIME
Hate crimes increase in Sweden: Here’s a breakdown of the stats 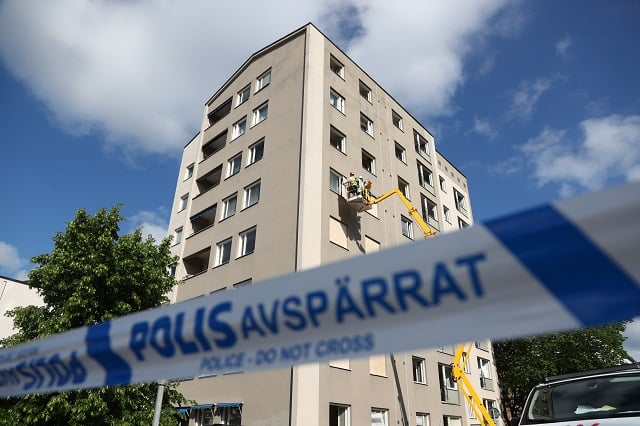 CRIME
Have your say: Has gang violence in Sweden had an impact on your life?

Ahead of a visit to the school in Rosengård that was damaged in the rioting, Märta Stenevi said that neither the Danish extremist Rasmus Paludan, who provoked the riots by burning copies of the Koran, nor those who rioted, injuring 104 policemen, were ultimately motivated by religion.

“His demonstration had nothing to do with religion or with Islam. It has everything to do with being a right extremist and trying to to raise a lot of conflict between groups in Sweden,” she said of Paludan’s protests.

“On the other side, the police have now stated that there were a lot of connections to organised crime and gangs, who see this as an opportunity to raise hell within their communities.”

Riots broke out in the Swedish cities of Malmö, Stockholm, Norrköping, Linköping and Landskrona over the Easter holidays as a result of Paludan’s tour of the cities, which saw him burn multiple copies of the Koran, the holy book of Islam.

More than 100 police officers were injured in the riots, sparking debates about hate-crime legislation and about law and order.

According to Stenevi, the real cause of the disorder is the way inequality has increased in Sweden in recent decades.

“If you have big chasms between the rich people and poor people in a country, you will also have a social upheaval and social disturbance. This is well-documented all across the world,” she says.
“What we have done for the past three decades in Sweden is to create a wider and wider gap between those who have a lot and those who have nothing.”
The worst way of reacting to the riots, she argues, is that of Sweden’s right-wing parties.
“You cannot do it by punishment, by adding to the sense of outsider status, you have to start working on actually including people, and that happens through old-fashioned things such as education, and a proper minimum income, to lift people out of their poverty, not to keep them there.”

This, she says, is “ridiculous”, when the long-term solution lies in doing what Sweden did to end extreme inequality at the start of the 20th century, when it created the socialist folkhem, or “people’s home”.

“It’s easy to forget that 100 to 150 years ago, Sweden was a developing country, with a huge class of poor people with no education whatsoever. And we did this huge lift of a whole nation. And we can do this again,” she says. “But it needs resources, it needs political will.”
You can read our full party leader interview with Märta Stenevi here.
SHOW COMMENTS

CRIME
Hate crimes increase in Sweden: Here’s a breakdown of the stats

CRIME
Have your say: Has gang violence in Sweden had an impact on your life?
Url copied to clipboard!