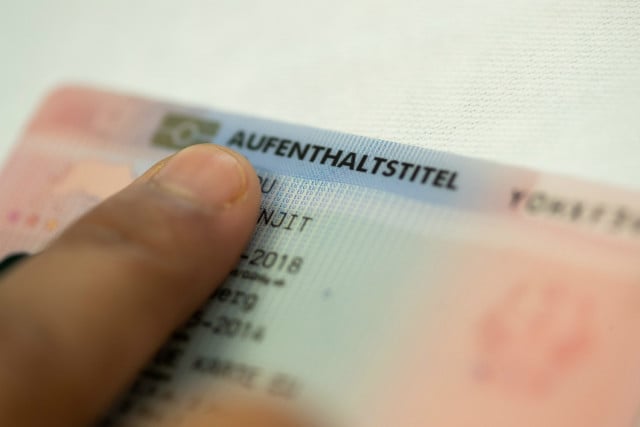 Brits will have to pay for German residency permits in future if it's a no-deal. Photo: DPA

If the UK leaves the EU without a deal at the end of this month, Brits in Germany will become third country nationals (in other words non-EU member states) and will be expected to pay the same price for a residence permit as people from other non-EU nations that fall into this category.

The residence permits range from €13 for a Fiktionsbescheinigung (holding permit) up to €147 for a type of Niederlassungserlaubnis (permanent residency).

Other permits include the Aufenthaltserlaubnis (limited residence permit) which typically costs around €100. Find the full list of permits and their fees under German law here.

A spokesman from the Berlin interior senate department told the Local: “If the United Kingdom withdraws without an agreement on October 31st 2019 then due to the changing legal situation all titles issued from November 1st 2019  will be subject to a fee in accordance with section three of the residence regulations. The fees vary according to the purpose of the residence permit.”

READ ALSO: Brexit limbo: How Brits in Germany are trying to secure their futures

The spokesman added that this is not something specific to Berlin and that all Brits in Germany receiving a permit after this deadline will face costs. He said: “This applies to all British nationals in Germany.”

Up until now, Brits in Berlin have been receiving residence permits without having to pay a fee.

As we've reported, Germany has said no British person will have to leave the country as a result of Brexit. However, to guarantee their future in the Bundesrepublik, Brits have to apply for a residence permit from their local Ausländerbehörde – and that's the case whether a deal is in place or not.

But the processes vary hugely across Germany, a country of 16 states and hundreds of foreigners authorities.  Some places, like Berlin, have been proactively asking Brits to register. Others have been sending letters out to residents asking them for interviews. Some do not plan to take any action until after the UK officially leaves the EU.

Germany also plans to bring in a no-deal Brexit law which will guarantee that no British citizen already living in Germany before Brexit will be forced to leave.

The move to impose fees in the event of a no-deal may be a disappointment to Brits who have set up their lives in Germany, especially as the UK government scrapped a fee for their settlement scheme for EU nationals.

British Berliner David Greenhouse, 35, said paying around €100 may not be a big deal financially for some but “it’s not great, and I would definitely hope that it wouldn’t be the case especially as there’s lots of people who may not be in a fortunate position”.

“If there’s going to be some charges like that and if people can’t afford to pay then what are they going to do? Are those people then going to be at risk of being deported if they couldn’t afford the fee to get the residence permit?

“If I were somebody in the German government I would try to be the bigger person. The UK was going to charge for the settlement scheme but they stopped doing that. So if Germany is going to charge us they would definitely not be the better person in this situation.” Another Brit, James East, described the move as  “unfortunate but understandable”.  “As long as it's a reasonable amount, I don't mind – but I'm afraid that the cost might be significant if the British government put EU citizens through the same processes (with the same fees) that they currently impose on third country nationals,” he said.
Meanwhile, Paul Forster said: “As a fairly new Berliner I personally feel like Germany has been more than accommodating to British citizens. I would be happy to pay a modest fee if it meant being able to stay.”
Registration in Berlin to close

In Berlin the registration system for Brits to apply for a residence permit will close if a no-deal Brexit happens. Any Brits who haven’t registered by this point will have to contact the Ausländerbehorde (foreigner's authority) directly by email to make an appointment and

“The online registration procedure would be shut down at midnight in the event of an unregulated departure of the United Kingdom on October 31st,” the spokesman told The Local.  “All Britons who have not registered by then can only contact the foreigners authority by e-mail or attend an interview during the regular opening hours.”

The Ausländerbehorde in Berlin is aiming to invite all Britons who have registered by October 31st to an appointment for a residence permit before April 30th, 2020.

Up until now, around 12,288 Brits have applied for a residence permit in Berlin. However, as there are about 18,000 Britons in the capital that means more than 5,700 still haven’t registered.

Of those who have registered, 2,698 have attended appointments and received a residence permit.

Here's the number of permits that have been given out so far in Berlin:

Brits who have registered have been advised not to take any further action, and simply wait for their appointment. However, if they are concerned about anything or have had a change in personal circumstances (for example if they are now married or have moved house) they should contact the Ausländerbehörde.

Any Brits who haven't registered yet are advised to do as soon as possible. British nationals in Germany will need a residence permit in future regardless if the UK leaves with or without a deal.

“Regardless of how the United Kingdom withdraws, British citizens will in future always need a residence permit or other proof of their right of residence for their stay in Germany,” the Berlin Senate spokesman told The Local.

“In order to secure the respective residence rights, the Ausländerbehörde Berlin therefore expressly recommends that you make use of the possibility of online registration on the homepage.”

EUROPEAN UNION
IN NUMBERS: How many non-EU citizens live in European Union countries?