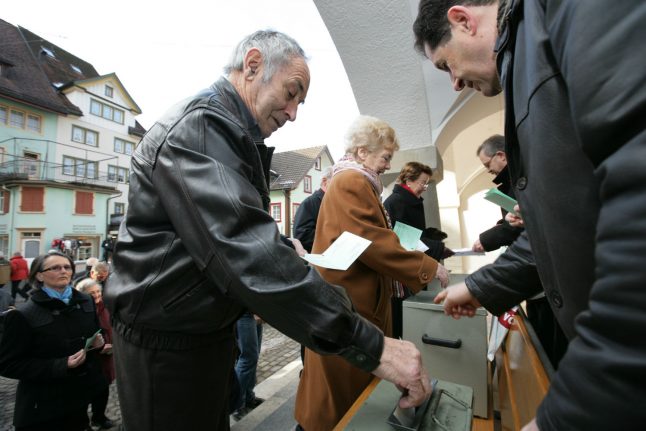 Even for foreigners who have spent decades here, the Swiss electoral system can be difficult to work out.

From the power reserved for cantons to the complicated way in which votes are occasionally allowed to flow over cantonal boundaries, the Swiss voting system has been developed as a solution to the country’s unique political system.

READ: 'I pay taxes but have no say in Swiss life': Your views on whether Switzerland should allow all foreigners to vote

This has been criticized however, with commentators noting that it results in an average of 150,000 votes being “trashed” at each Swiss federal election.

One such innovation is the proportional voting system, which seeks to replicate the support for parties in the electorate with representation in the parliament.

Unlike a winner-takes-all simple majority system – such as that seen in the United States – proportional representation can ensure that the divergent sections of the populace have their voices represented.

This is problematic however from a democratic point of view as it has the effect of benefiting major parties. In the most recent federal election, the SVP won 32.5 percent of the seats, but did so with only 28.4 percent of the vote.

Conversely, the Evangelical People's Party of Switzerland (EPP) won two percent of the popular vote, but received slightly less than one percent of the seats. While the proportional system is motivated by democratic intentions, it can produce absurd results – particularly in a divided electorate with a number of smaller parties.

In the 2015 election, SVP candidate David Zuberbühler was elected to the National Council with over a third (36.1 percent) of the vote – meaning that just under two thirds of voters had their opinions ignored.

In total, around 310,000 votes were cast in the most recent National Council election for parties that did not win a seat. Under Switzerland’s list system, around half of those did contribute to the election of parties with a similar ideology to those for which the votes were cast.

The other half, as reported in the Neue Zürcher Zeitung, “were effectively voting for the trash”.

Voting in your neighbours election?

One proposed solution for National Council elections to better represent the electorate – and minority parties – is to adopt the so-called ‘double-proportional’ system. This system would allow a vote for one party in one canton to be used in another canton where the proportion in the first canton is not met.

This is used in eight different cantons currently, but has not been adopted in federal elections.

As yet, it appears that resistance from major parties – who stand to be disadvantaged by the proposal – is the most significant stumbling block, along with criticisms that the system will be too complicated.

The 2019 Swiss election is set to take place on October 20th.