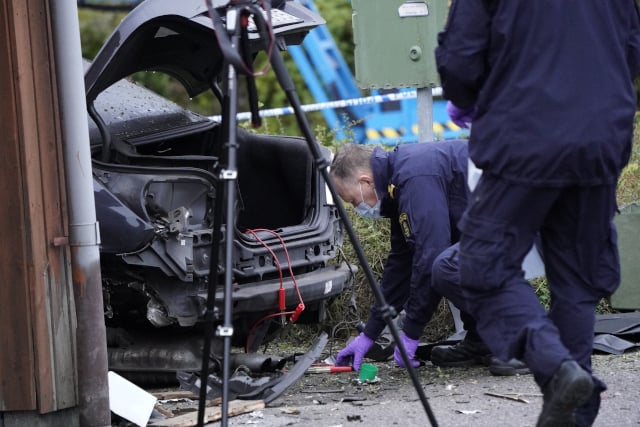 Police on the scene of the blast on Friday. Photo: Johan Nilsson/TT

No one was injured when the car exploded in the Gunnesbo area of Lund in southern Sweden shortly before 4.30am, but the property it was parked outside was damaged in the blast.

Police said they were investigating potential links to an explosion outside a grocery store in the town centre on Saturday, but that there was nothing indicating that the two incidents were connected.

“Of course we're going to look at that as part of the investigation, to see if there are any links or connections with previous cases. We always do, especially when the crimes are serious like this one,” Jimmy Modin, press spokesperson for southern Swedish police, told the TT newswire.

No arrests had been made by 9am on Friday. The area was cordoned off while the national bomb squad made sure it was safe for police forensic teams to start examining the vehicle.

More than 90,000 people live in Lund, near Malmö. It is also the seat of Lund University, one of the oldest and largest universities in Sweden, with 40,000 students.

INTERACTIVE MAP: Explosions in Malmö in 2019 The car and the damage to the property. Photo: Johan Nilsson/TT