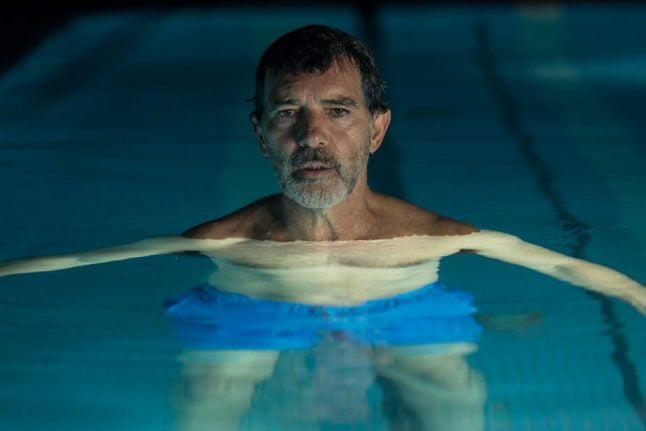 The director Salvador Mallo, a stand-in for Almodóvar himself, is played by Antonio Banderas. Pathé UK

The movie stars Antonio Banderas as the protagonist Salvador Mallo – a film director who represents Almodóvar himself.

Almodóvar’s endlessly self-referential films, though they are able to stand alone, have always gained when viewed in the context of the artist’s life and body of work. Pain and Glory is no exception. But where Almodóvar has, in the past, been accused of self-indulgence, here he shows an assured lightness of touch.

Banderas’ body as a still life expresses the lone melancholy of a character in his twilight years. On his belly he bears the shiny raised scar of an operation. Vivid animated graphics (by Juan Gatti) allow us literally to see inside the body of Mallo, illustrating his many ailments – from lumbar backache and sciatic nerve pain to depression and anxiety.

But the omnipresence of his ailments throughout the film doesn’t feel heavy – instead it is confessional and intimate, hinging on the audience’s knowledge that Almodóvar suffers from a similar list of afflictions. The “Pain” of the title is physical as well as spiritual – Mallo tells his doctor that he can’t make films if his body is weak. 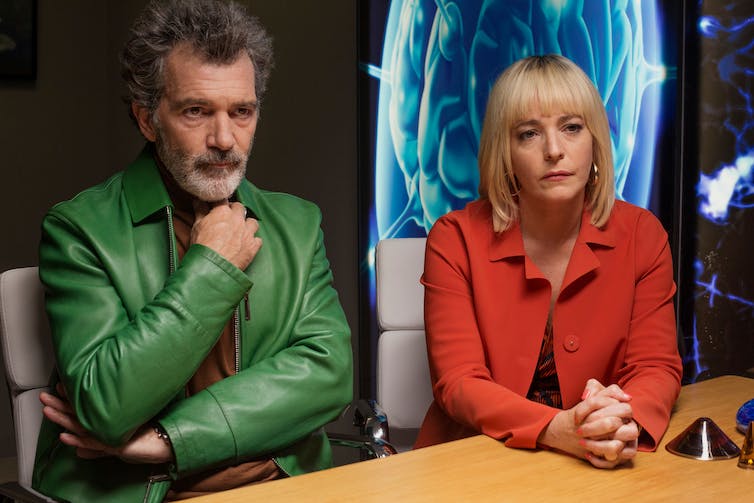 Almodóvar’s depiction of his own pain feels intimate and confessional. Pathé UK

Paradoxically, making films is the very thing he needs to do. Creativity – and its inherent eroticism – is posited as a wellspring to combat death and paralysis. When a past lover, Federico (Leonardo Sbaraglia), stumbles across a performance of Addiction, a play written by Mallo detailing their relationship, the two reconnect in an emotional and highly sensual encounter that prompts Mallo’s journey to recovery, both physically and emotionally. Later, Mallo discovers – again, seemingly by chance – a painting of himself as a child by an old family friend, Eduardo (César Vicente), catalysing his memories of his sexually charged relationship with the young artist (in reality, the painting is the handiwork of Jorge Galindo, an artist with whom Almodóvar has collaborated in the past).

Through these accidental discoveries, art mediates between characters, reminding them of shared raptures. Mallo’s life becomes once again charged with sensuality. While he is shown to be dependent on both love and art in a way that might be described as an addiction, ultimately their effects on him are healing. Life, he reads out loud, may be a “useless medicine”, but art is his tonic.

Due to the highly personal and self-referential nature of Almodóvar’s work, it is often classified as belonging to the Spanish genre of autoficción (autofiction, or autobiographical fiction). Pain and Glory in particular seems to have been made almost specifically for those with an intimate knowledge of the artist’s life and career.

Its central plotline – in which a director and an actor are reunited after 32 years – draws unmistakably on Almodóvar’s public falling out with Carmen Maura, the star of Women on the Verge of a Nervous Breakdown (the 1988 film that launched Almodóvar to international fame). Maura was reunited with the director years later when in 2017 they attended together a showing of his early film, Law of Desire, at Madrid’s Filmoteca as part of a retrospective of Almodóvar’s work.

In one of the film’s most beautiful scenes, Mallo as a young boy watches his young mother (played by Penelope Cruz) and other women singing as they wash sheets in the river. Prior to appearing here in film, this moment was described as a childhood memory by Almodóvar as early as 2006 in publicity for his movie Volver. 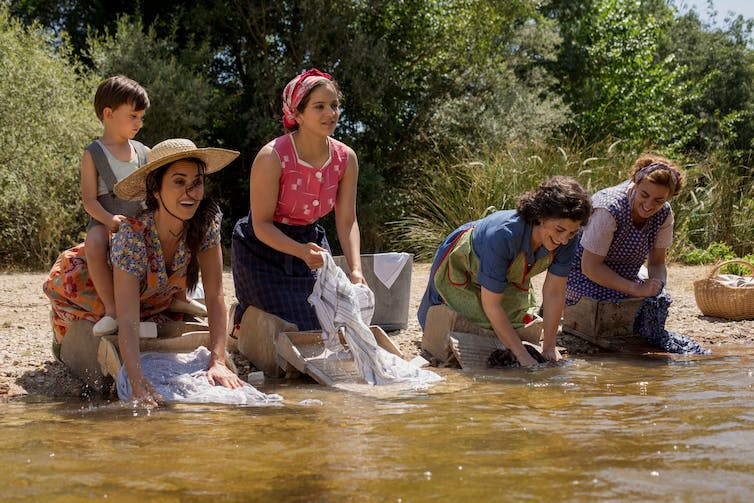 Almodóvar recreates an early childhood memory, in which his mother, played by Cruz, washes sheets in the river. Pathé UK

As well as individual memory, Pain and Glory draws on collective memory. It subtly refers to Almodóvar’s connection to La Movida, the underground scene that emerged as a reaction to the repression of the dictatorship of Francisco Franco, and touches on the drug-taking and darker sides of the hedonism of 1980s Spain.

But the film’s relationship to reality is not as straightforward as it may seem. Almodóvar has inserted famous flamenco star Rosalía, for example, into the scene with Cruz by the river where the women sing A tu vera (At Your Side), a famous hit by folkloric diva Lola Flores. Spanish folklore gets a contemporary update, and so does Almodóvar’s childhood memory.

In another scene, the older version of Mallo’s mother (played by Julieta Serrano) scolds her son for the way he has represented her and the characters of his childhood (“I don’t like autofiction” she says, and “The neighbours don’t like it”). In light of the marked lack of resemblance between Serrano and Cruz, Almodóvar hints at his own adjustments and embellishments.

His mother’s vague allusion to “the neighbours” recall a common saying in Spanish —el qué dirán– which translates loosely as “what will the neighbours think?” The neighbours, like Almodóvar’s audience, are always watching. Perhaps Mallo’s mother is not only representing the voices of those among whom Almodóvar grew up as a child, but of those who have followed and critiqued his work as an adult. When Mallo remarks to his mother, later, that “I failed you by being as I am”, he is perhaps speaking back to those same critics.

Ultimately, though Almodóvar bares his vulnerabilities, he does not apologise for being “as he is”. The film pays tribute to his audiences – critics and fans alike – who have followed his career up to this point. But if we are to believe this film as a self-portrait, it was also a film for himself. Making it was his therapy and cure.

This article was originally published in The Conversation. Read the original. 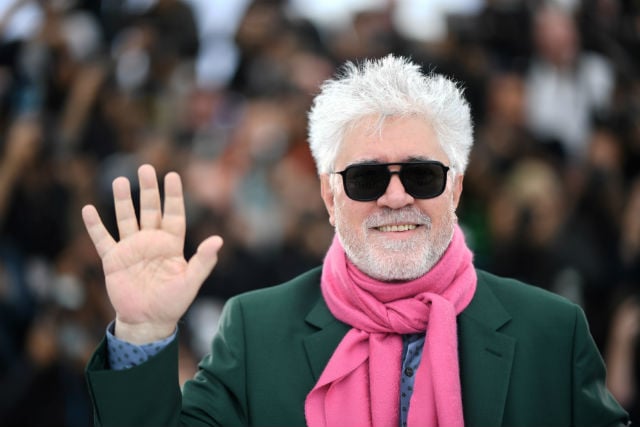