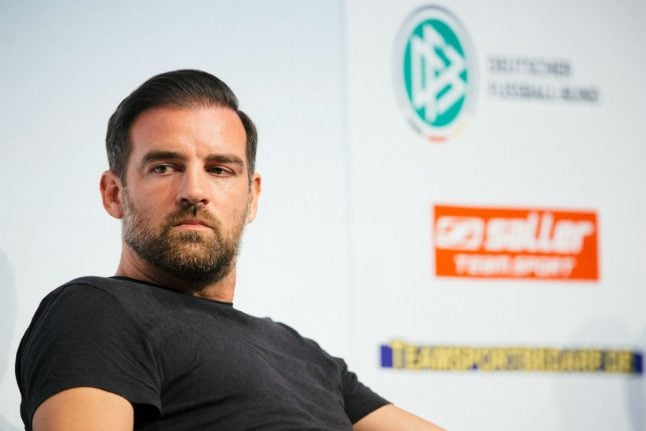 Christoph Metzelder sitting at the podium of the International Trainer Congress in Dresden in January 2018. Photo: DPA

“We can confirm an investigation against Christoph Metzelder on suspicion of sharing child pornography, including digital images,” a spokeswoman for the Hamburg prosecutor's office, Liddy Oechtering, told AFP.

The 2002 World Cup finalist is alleged to have used WhatsApp to send pornographic photos of children to a woman in Hamburg, Oechtering said.

The woman reported the images to the Hamburg police, who opened investigations alongside public prosecutors in August.

Oechtering confirmed reports that investigators had carried out raids in two locations on Tuesday, but declined to give further details.

According to a report in Spiegel magazine, the raids were on Metzelder's home and offices in Düsseldorf, and led to the seizure of a laptop and a mobile phone.

Oechtering said the footballer had not been detained, adding that “we are currently analyzing the materials seized.”

Metzelder played for major clubs such as Madrid and Borussia Dortmund in a career spanning 15 years.

He retired from football in 2014 and has since worked as a pundit for Sky Sports Germany and president of his local club TuS Haltern.

Since 2006, the 38-year-old has run a foundation in his own name to support socially disadvantaged children across Germany.

He has also recently appeared as a pundit on public broadcaster ARD, who said Wednesday that they had “suspended the co-operation until the accusations have been clarified”.

His is the second high-profile legal case involving a former Germany defender in two days.

On Tuesday, prosecutors in Munich confirmed that Bayern Munich defender Jerome Boateng was under investigation for a reported dangerous assault on his ex-partner.

The coach, who was not named, has had his contract terminated “by mutual agreement”, the German league and cup champions said in a statement late Monday.

The sacking is “the first result of an internal survey currently under way” at the youth training academy, it added.

Bayern Munich boss Karl-Heinz Rummenigge said last week he was “furious” after hearing of the allegations, first reported by the ARD broadcaster.

The coach is accused of making racist and other discriminatory comments in a series of messages, which he initially denied but later admitted, according to German media.

He had been a youth coach at the club since 2003 and had been in charge of children's and youth teams since 2006, according to the weekly Der Spiegel.

He made discriminatory comments based on skin colour, nationality, religion and sexual orientation, Spiegel reported.

These comments “do not correspond at all with the values that Bayern Munich represents”, Rummenigge said after police in Munich opened an investigation into the allegations.

Bayern Munich was founded by German Jews in 1900, but all Jewish managers and players were excluded after Hitler came to power in 1933.

In June, not long after the death in the US of black man George Floyd at the hands of a white police officer, the entire team were pictured wearing t-shirts bearing the slogans “Black lives matter” and “Red card to racism”.