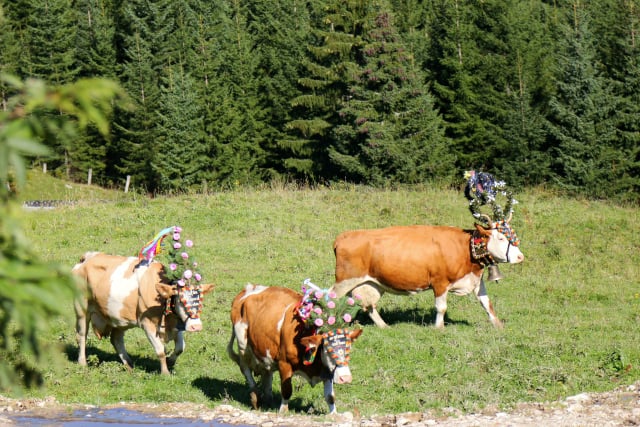 Austrian police are looking for thieves who stole bells from cows grazing in three pastures in the west of the alpine country, a spokesman said on Monday.

“Of course people may wonder why someone would steal a cowbell,” Bernhard Gruber, a police spokesman from the Tyrol region, told AFP.

He said police were still investigating the three thefts, which all occurred this month, totalling 10 cowbells. They suspect the thieves in at least the last two cases were the same.

“They don't have a high material value… but for the farmers themselves it's more the sentimental value,” Gruber said.

Many breeders take their cattle to graze in mountain pastures in the spring, bringing them back down before winter.

This week, the Viennese police department started a weekly ‘series’ of sharing interesting stories on their social media accounts.

Calling the series ‘Misunderstanding Wednesday’ (Missverständnismittwoch), the very first post is about a call they received to an apartment complex after a concerned citizen complained to emergency services about a “smell of decomposition in the staircase”.

READ ALSO: Stephansdom: Vienna woken up after hacker sets church bells to ring at 2am

The alleged corpse, it turns out, was just the neighbour’s smelly shoes which were left in the building corridor, in front of their apartment.

The police didn’t say when exactly the incident took place.

“When our colleagues are called because of the ‘smell of decomposition in the staircase’… and notice that the stunk is from the neighbour’s shoes which were left in front of the apartment door”, the official Twitter account of the Vienna police department reads.

‘When in doubt it is an emergency’

The authorities were light-hearted about the misunderstanding, even sharing a “meme-like” picture on their social media accounts, saying “some missions turn out to be different than initially assumed”.

However, they reiterated that the misunderstandings should not deter people from calling 133, the emergency police number. They added that in case of emergencies and even if you are not sure, the authorities should be called and they will assist you.

“Note: in case of doubt, it is an emergency”, the Vienna police department says. “Never be afraid to dial the emergency number.”