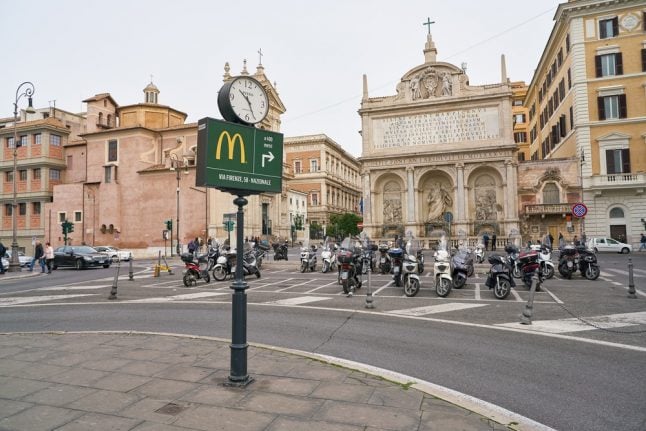 The new fast-food restaurant is planned to be built at a privately-owned garden centre between the third-century Baths of Caracalla and the city's ancient Aurelian Walls.

The project was authorised by the local council in the city's Municipio 1 district, but Rome's mayor Virginia Raggi claimed she didn't know about the project until she read about it in a local newspaper on July 25th, the Ansa news agency reported. Raggi is now demanding a suspension of the project and has called a meeting with developers, saying they need to rethink the idea “evaluating all the risks that such a plan could generate at a very delicate site, bound by UNESCO”.

Raggi has reportedly written to the president of Municipio 1, Sabrina Alfonsi, stating her concerns for “decorum, the image of the city and the balance of the historic centre's delicate urban fabric”, Ansa wrote.

Fast-food outlets are often accused of worsening the city's long-running problem with rubbish piling up in the centre, particularly at sites frequented by tourists.

Rome's current city administration has pushed through a raft of new laws aimed at cleaning up the city's image, with bans on everything from drinking alcohol and “slovenly eating” in the streets to swimming in fountains – offences now punishable by heavy fines and temporary banishment from the centre.

The planned new 800-sqm McDonald's, part of redevelopment plans for an area of the 35,000-sqm EuroGarden centre, would have seating for 250 inside and outside.

The fast food giant said the new site would create some 60 jobs.

Cities are often reluctant to step in and prevent the US giant from opening branches, even in historic areas, wary of expensive lawsuits being brought by the company. Another new branch of McDonalds is set to open in Rome next to the Pantheon, local media reports.

Work on the project to create the new restaurant is already underway at a former bank close to the world-famous monument.

There are already several dozen McDonald's outlets in the Italian capital.

Italy has the fourth-highest number of McDonald's restaurants in Europe, with some 578 branches operating in the country in 2018, statistics show.

The only European countries which had more branches of the American fast-food chain were Germany with 1,489, France with 1,463 and the UK with 1,292.

READ ALSO: The must-try foods from every region of Italy