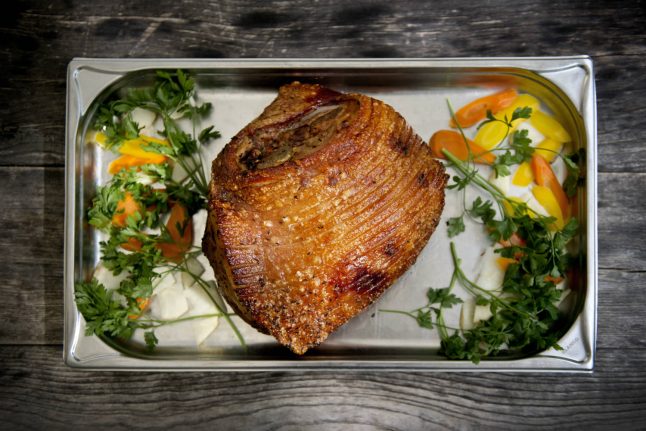 The decision to take pork of the menu was made “in consideration for a changing world,” according to the kitas (nurseries).

Yet many parents and community members took this to mean that the culinary change was being carried out for the school’s Muslim community – even though the word Muslim was not explicitly used.

But news spread quickly and several federal politicians from the centre-right Christian Democrats (CDU) and far-right Alternative for Germany (AfD) then weighed in with attempts to persuade the kitas against the plan.

The hashtag #Schweinefleisch (pork) was used widely on Twitter both protest and to back up the decision. Local police were called on to protect both kitas after they received threats.

“In what type of world do we live?” tweeted a Saxon Green Party politician in response to the “racist” demonstrations to be held against the decision.

Wolfgang Schäfer, the director of both schools, suspended the “pork free” menu decision for the time being in response to the row.

Yet one father of a child at the kita wrote that there was not a full ban because children could still carry gummi bears (which often include gelatine from pork) with them to school, for example.

Rather, he wrote on Facebook, the school turned to inclusivity for all students, rather than exclusivity towards those who can’t – or don’t want to – eat pork.

Why such a controversy?

So why does it matter what's on the menu in a kindergarten?

Germany's top-selling daily Bild called pork a core part of German culture and that Muslims should and can learn to adjust.

Pork is a “success story” for Germany, according to news website bento. That makes banning it – for some people – seem like a direct insult to German culture. “Historically the animal is cheap to buy and keep. Almost every farming family could have one.”

While producing beef was reserved for upper class families, stated the news website, producing pork was something that could be done easily by the “everyday man”.

“Food is very strongly connected with our cultural identity,” nutrition researcher Thomas Mohrs told Bento. He added that pork is considered “holy” in both Germany and Austria, especially in dishes such as Schweinebraten (roast pork) and Schnitzel.

There's a darker side to the debate too.

In videos released by far-right extremists in Germany’s, pork has been used as a symbol for national identity, especially following an influx of refugees in the last few years, many of whom come from Islamic countries.

These videos carry a subliminal message: “Where pork is eaten, the world is orderly,” writes bento.

Long a cult favourite among Germany fans, the left-wing city of Leipzig appears to now be gaining mainstream recognition after the Lonely Planet crowned it the country’s top travel destination this week.

In a new book titled “Ultimate German Travel Destinations – the top 250”, the travel publisher put Leipzig ahead of picturesque getaways such as Lake Constance and the Zugspitze as its number one destination.

“The hype that some say surrounds the city isn’t hype t all: Leipzig really is hipper than Berlin, and hotter than Munich, especially among millennials,” the guidebook boldly claims.

It goes on to lavish praise on the city of 600,000 inhabitants as “young, exciting, multifaceted – sometimes colourful, sometimes grey – and with a vibrant liveliness.”

“Everyone wants to go to the city where the anti-GDR demonstrations started,” the guidebook continues. “It is the home of Auerbachs Keller (made famous by Goethe and Faust); it’s the city of street art and wave gothic festivals; and its artistic scene at the Baumwollspinnerei is second to none.”

READ ALSO: A love letter to the eastern German city of Leipzig

‘Not cooler than Berlin’

Reaction to the list among the Local’s readership was mixed.

“It is a beautiful city and it’s easy to navigate. I find it hard to say that it’s cooler than Berlin, though. Berlin simply has more,” one reader told us on Facebook. “It’s the kind of place where people find their ‘spot.” I think most people in Leipzig know about most places in Leipzig. It’s a much smaller city. That may just be a more favourable lifestyle for some.”

Praise for Saxony’s biggest city ranged from admiration for the beauty of its architecture (particularly its train station) to the vibrancy of its arts scene.

The lakes are glorious, beautiful city center, many students and artists are creating a wonderful atmosphere, a sense of possibility can (still) be felt throughout town 🙂

Great city! Years back the NY Times did the same (saying Berlin was over and Leipzig was the new cool kid), and most people in Leipzig didn't want the acclaim. Prob the same this time round. 🤣

Best railway station in Europe…. And competition is fierce for that honour.

Others suggested that Leipzig is indeed overhyped and that it can’t compete with natural wonders such as the pristine Königssee in the Bavarian Alps.

Lonely Planet needs to go touch some grass 😁 no city vacay will ever hold a candle to Eibsee, or Königssee, or a Hüttenwanderung…

Lake Constance, the country’s largest body of fresh water, came in second on the list.

The authors praised the southern See, which borders Switzerland and Austria, for “the many beautiful spots on its shores: Lindau, Meersburg, Überlingen, Constance and more – often surrounded by lush orchards.”

A regatta on the Bodensee in September 2021. Photo: dpa | Felix Kästle

“It’s impossible to imagine the Hanseatic city’s skyline without this glass work of art, which soars into the sky above the harbour like a frozen wave,” the book notes.

Also in the top ten were the Wattenmeer, which is a huge nature reserve on the North Sea coast, Berlin’s museum island, the sandstone hills of Saxony, and Germany’s highest peak, the Zugspitze in Bavaria.