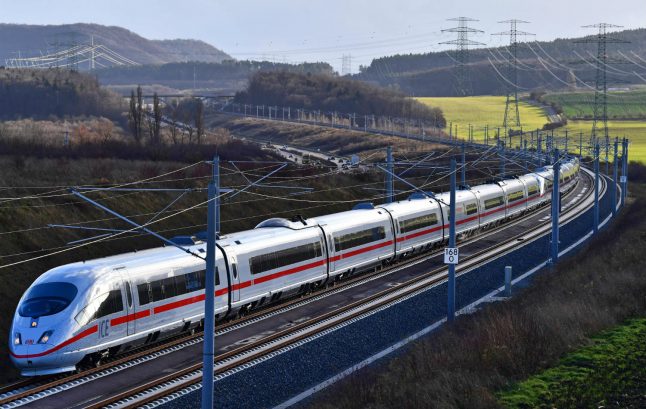 More trains, reliable timetables and cheaper tickets: this is the Green answer to growing air traffic in Germany.

“By 2035 we want to make domestic flights obsolete as far as possible,” said the Green parliamentary group in a paper seen by the Süddeutsche Zeitung.

According to the environmentally friendly party, which is riding high in the polls after a stunning result in the European elections, three billion euros should be injected into the country’s railway network annually in order to expand and speed up the rail system.

The goal must be to reduce the travel time between as many places as possible in Germany and neighbouring countries to “a maximum of four hours”, the Greens said. The authors singled out the routes from Cologne and Düsseldorf to Berlin, Hamburg or Munich as well as the connection between Frankfurt and Berlin.

In many places, bottlenecks would have to be eliminated quickly. In addition, more trains are needed in the morning and evening rush hours to make train travel more attractive to commuters as well.

However, this also requires extremely punctual trains and a high speed broadband connection onboard.

The radical proposal could prove enticing to voters in Germany, many of whom may have already given their vote to the Greens in the European parliamentary elections in May or state elections.

READ ALSO: 'Surfing the zeitgeist': How the Greens won over Germany

According to the Federal Statistical Office, 23.5 million domestic passengers travelled by plane in Germany last year. In 2017 the figure was 23.7 million, a drop of 0.8 per cent. A plane flying near Frankfurt during a sunset. Photo: DPA

The paper also provides for a “step-by-step introduction of the Kerosene tax for domestic flights”. This should gradually align with the tax rate on petrol which currently stands at 65 cents per litre, the party argues.

Yet for trains, the VAT should be reduced from 19 to seven percent. The Greens also want to lower route prices and the electricity tax.

Meanwhile, the party is also thinking about how to improve trains to make people think twice about taking longer or international flights.

They proposed a “European night train network” that they hope would attract more passengers to the railways.

“It is unacceptable that the airplane, as the most climate-damaging mode of transport, is still being subsidized with billions, while the environmentally friendly railway is chronically underfinanced,” said Daniela Wagner, one of the authors of the paper.

READ ALSO: Everything you need to know about exploring Germany by train

Prices must also reflect the ecological truth in air transport, they said. “At the same time, the railways must be strengthened by building and expanding new routes and by making them reliable, punctual and affordable,” the paper said.

Climate change is high on the agenda across the world as anti-climate change activists call for action and pile pressure on countries to meet CO2 targets. Fridays for Future demonstrations, led by young Swedish activist Greta Thunberg, continue to take place across Germany.

The topic also played a huge role in the recent European parliamentary elections which saw the Greens surge to second place in Germany, behind Angela Merkel's party, the centre-right CDU which suffered heavy losses.

How many wolves are there in Sweden?

Wolves were extinct in Sweden by the mid-1880s, but a few wolves came over the Finnish border in the 1980s, reestablishing a population.

There are currently 480 wolves living in an estimated 40 packs between Sweden and Norway, with the vast majority — about 400 — in central Sweden.

How many wolves should there be?

In 2015, the Environmental Protection Agency was commissioned by the government to update the analysis,  and make a new assessment of the reference value for the wolf’s population size. It then ruled in a report the population should be maintained at about 300 individuals in order to ensure a “favourable conservation status and to be viable in the long term”.

Sweden’s right-wing opposition last week voted that the target number should be reduced to 170 individuals, right at the bottom of the range agreed under EU laws. With the Moderate, Christian Democrat, Centre, and Sweden Democrats all voting in favour, the statement won a majority of MPs.

“Based on the premise that the Scandinavian wolf population should not consist of more than 230 individuals, Sweden should take responsibility for its part and thus be in the lower range of the reference value,” the Environment and Agriculture Committee wrote in a statement.

Why is it a political issue?

Wolf culling is an almost totemic issue for many people who live in the Swedish countryside, with farmers often complaining about wolves killing livestock, and hunters wanting higher numbers of licenses to be issued to kill wolves.

Opponents of high wolf culls complain of an irrational varghat, or “wolf hate” among country people, and point to the fact that farmers in countries such as Spain manage to coexist with a much higher wolf population.

So what has the government done?

Even though the ruling Social Democrats voted against the opposition’s proposal, Rural Affairs Minister Anna-Caren Sätherberg agreed that the wolf population needed to be culled more heavily than in recent years. As a result, the government has asked the Environmental Protection Agency to once again reassess how many wolves there should be in the country.

“We see that the wolf population is growing every year and with this cull, we want to ensure that we can get down to the goal set by parliament,” Sätherberg told the public broadcaster SVT.

Sweden would still meet its EU obligations on protecting endangered species, she added, although she said she understood country people “who live where wolves are, who feel social anxiety, and those who have livestock and have been affected”.