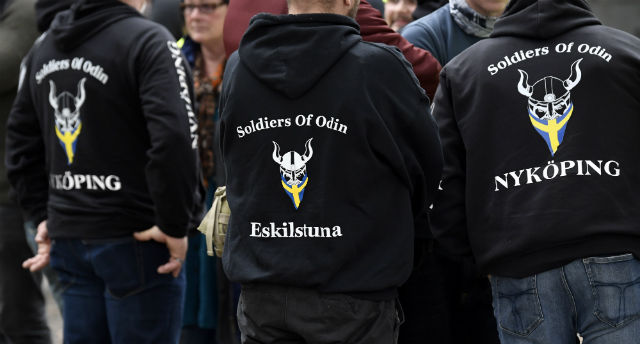 Tobias Malvå was involved in the Soldiers of Odin vigilante group in Trelleborg. Photo: Maja Suslin/TT
“One day the world will understand that Adolf Hitler was right,” Tobias Malvå wrote on the Russian internet forum VK.
Prosecutor Linda Rasmussen also submitted screen captures of 35 different posts on the site where Malvå attacks homosexuals, Jews and people of colour.
She told the Sydsvenskan newspaper that she was confident she had sufficient evidence to get a conviction.

“It's of course up to the court to decide if it's enough,” the prosecutor said. “I believe it is enough.”
Malvå, 44, is charged for having “threatened or expressed disgust at an ethnic group or another such group with reference to race, skin colour, nationality or ethnic origin, faith or sexual alignment.”
In his early 20s, Malvå was a well-known neo-Nazi who was sentenced for several violent offences, but in 1999 he rejected Nazism and joined Exit, a charity which helps people leave the neo-Nazi groups.
However, in 2003, he left Exit and slowly returned to neo-Nazi groups, setting up the Soldiers of Odin group in Trelleborg and also speaking on the podcast released by Nordfront, the media arm of the neo-Nazi NMR.
In 2018, he submitted a letter to a court which was to rule over custody of his daughter, expressing his dedication to National Socialism. “I do not recognize this legal system as legitimate as you are supporting a system which is an enemy of the people,” he wrote.
VK has become popular among Swedish neo-Nazis, who believe it carries out less monitoring and regulation of posts than its US counterpart Facebook.
“People usually say that VK is more permissive when it comes to various extreme opinions,” Rasmussen said. “But I don't know if they've started to clean up and get a grip on it. It's an important question.”