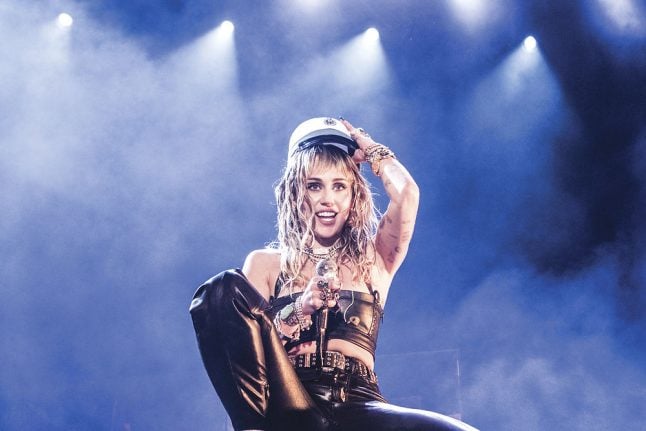 The 26-year-old American superstar, famous for hits including We Can’t Stop, Wrecking Ball and Party In The U.S.A., took a student cap (studenterhue), worn by newly-graduated upper secondary school students, from a member of the crowd and briefly wore it during her set.

The owner of the cap appeared delighted to have been able to offer up his headgear. Student caps are traditionally worn every year by graduating high school classes all over Denmark. The caps are normally marked inside by wearers according to custom as they celebrate their achievements in exams – and during subsequent celebrations.

READ ALSO: Danish students and caps: What's all the noise about?

Although these traditions vary regionally, none are thought to involve lending the studenterhue to a world-famous singer.

But Odense graduates may have just been set the toughest student cap challenge of all, should anyone wish to emulate Saturday’s moment on the Tinderbox stage.

Although Cyrus’ music is not generally known for its political message, she thanked the crowd at the Danish festival with a speech in which she addressed the political situation in the United States, while praising what she had seen of life in Denmark, Soundvenue writes.

“There is no planet B,” she said to an enthusiastic response from the audience.

In its review, Soundvenue said Cyrus' set at the festival was “dubious” and “a little too short”, but commended her “presence and energetic performance.”

The delay was confirmed by transport minister Benny Engelbrecht in a written notification to parliament.

“The beginning of operations at Odense Letbane will be delayed from September 1st 2021 until around New Year 2021-22,” the statement reads.

“This is because the company [Odense Letbane, ed,] can confirm that the [contractor] cannot live up to agreed schedule for handover of the transport system, apparently as a consequence of Covid-19,” Engelbrecht also wrote.

In a statement, Odense Letbane said that the primary contractor, Comsa, had recently given notice that the development would be delayed.

“We have recently been able to see that it would be more difficult for Comsa to finish in time for the planned opening. We have naturally maintained pressure on Comsa for as long as possible,” Odense Letbane CEO Mogens Hagelskær said in the statement, which was reported by TV2 Fyn.

“But the primary contractor has now presented a new schedule… and we must unfortunately concede that the light rail will not be able to open until around New Year,” Hagelskær added.

Spanish firm Comsa has said that the ongoing situation related to the coronavirus across Europe has resulted in difficulties in supplying labour and materials for the project in Denmark. The company has also had to adapt its working methods, which involve housing labourers in small groups, TV2 Fyn reports.

In 2017, a light rail system in Aarhus opened after also experiencing construction delays.