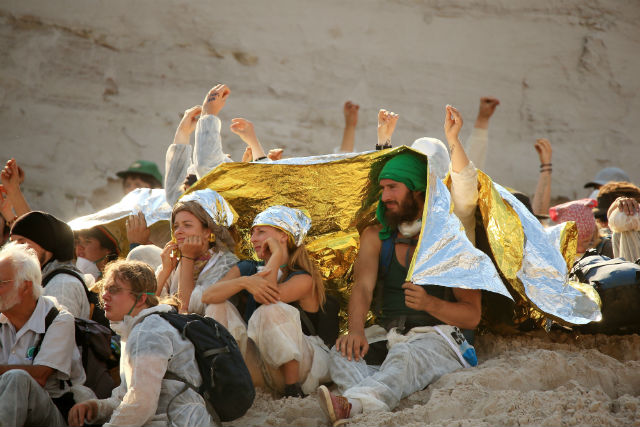 The protesters carried reflective blankets to ward off the sun. Photo: David Young/dpa
The activists, many dressed in white overalls and carrying sleeping bags, got into the vast Garzweiler lignite mine after a cat-and-mouse game with police, an AFP journalist said.
They ignored earlier police warnings that the site was not safe and a caution from RWE that they would prosecute trespassers.
The activists, using blankets to protect against the sun, were quickly encircled by police and their vehicles to prevent them advancing further. The action was part of a series of protest planned over the weekend.
Garzweiler, which covers 48 square kilometres (18 square mile), supplies lignite, or brown coal, to power stations in the region. The declared aim of the “Ende Gelaende” (EG) protests is to shut down its operations.
On Friday, 500 activists cut off the supply of coal to the Neurath plant, one of Germany's main coal-fired power stations, by sitting down on the rail tracks the supply trains use. The activists scrawled 'climate justice' on a rock face at the mine. Photo: David Young/DPA
READ ALSO:
The German phrase “Ende Gelaende” means that something is irrevocably finished — similar to “end of story” — which is how the protesters feel about the fossil fuel age.
With this new generation of protesters, the authorities must contend with large numbers of activists who are committed to — and often trained in — non-violent civil disobedience.
More protests
A few kilometres from Garzweiler, some 8,000 people protested Saturday in the town of Keyenberg, which is threatened by plans to expand the mine.
“This day is a reason to hope,” said EG spokeswoman Kathrin Henneberger.   “Despite the unprecedented failure of the politicians faced with the climate crisis, thousands of people are today sending a clear signal for climate justice.
“Whether it is a demonstration, a school strike or a blockade, this movement is determined to put an end to the era of fossil fuels,” she added. Police gather near some of the gigantic machinery at the Garzweiler mine. Photo: David Young/dpa
Many of those who took part in the protest were school pupils and students who were part of the “Fridays for Future” demonstrations the day before.
Between 20,000 and 40,000 young activists from 17 countries flocked to Aachen near the Dutch and Belgian borders Friday for a huge show of force of the school-strike movement launched by Swedish teenage activist Greta Thunberg.
This weekend's actions are being closely followed in Germany, where surveys suggest global warming is now the public's top concern — and where the Greens party is for the first time polling neck-and-neck with Chancellor Angela Merkel's conservatives.
Many voters agree with the protesters' demand on carbon fuels, to “keep it in the ground”, especially after last year's scorching summer, when drought slashed crop yields, forest fires raged and shipping was halted on dried-out
rivers.
Germany's decision to abandon nuclear power after the 2011 Fukushima nuclear power station disaster in Japan made it more dependent on coal.
Although the government has committed to abandoning the fossil fuel by 2038, for the climate activists this is judged too little too late.

Protesters take part in a demonstration in solidarity with the Palestinians called over the ongoing conflict with Israel on May 15, 2021 at Hermannplatz in Berlin. STEFANIE LOOS / AFP

Around 3,500 people had gathered in the German capital’s Neukölln district on Saturday afternoon in one of several rallies over the escalating conflict in the Middle East, according to police.

Protesters threw stones, bottles and fireworks as police tried to break up the demonstration, injuring 93 officers and prompting them to use pepper spray.

Several people were being investigated for shouting “anti-Israel slogans”, the police said.

Around 900 officers were deployed to several demonstrations during the day, with the others passing mainly peacefully.

Palestinian militants have launched more than 3,000 rockets into Israel over the past week, according to Israel’s army, which has launched hundreds of air strikes on Hamas and other Islamist groups in the crowded coastal enclave of Gaza.

The most intense hostilities in seven years were triggered by weekend unrest at Jerusalem’s Al-Aqsa mosque compound, which is sacred to both Muslims and Jews.

Germany has seen several scattered demonstrations over the escalating conflict, with protesters shouting anti-Semitic slogans, burning Israeli flags and damaging the entrance to a synagogue with stones.

The Central Council of Jews in Germany on Sunday said it had received “a torrent of the most vile anti-Semitic insults” on social media.

Council president Josef Schuster urged the police to take a hard line against anti-Semitism and said recent events had been “reminiscent of the darkest times in German history”.

Interior Minister Horst Seehofer on Sunday said Germany would crack down hard on anyone found to be spreading “anti-Semitic hatred”.

“We will not tolerate Israeli flags burning on German soil and Jewish institutions being attacked,” he told the Bild am Sonntag newspaper.

Speaking at an ecumenical church congress, President Frank-Walter Steinmeier also said “nothing can justify” threats to Jews in Germany or attacks on synagogues.

Some six million Jews were murdered during the Holocaust under Adolf Hitler’s Nazi regime.

The Jewish community in Germany has been growing since reunification in 1990, notably with the arrival of many thousands of Jews from the former Soviet Union.

The arrival of refugees from Arab nations hostile to Israel, in 2015 and 2016, added to the prevailing anti-Semitism in some Muslim circles in Germany.