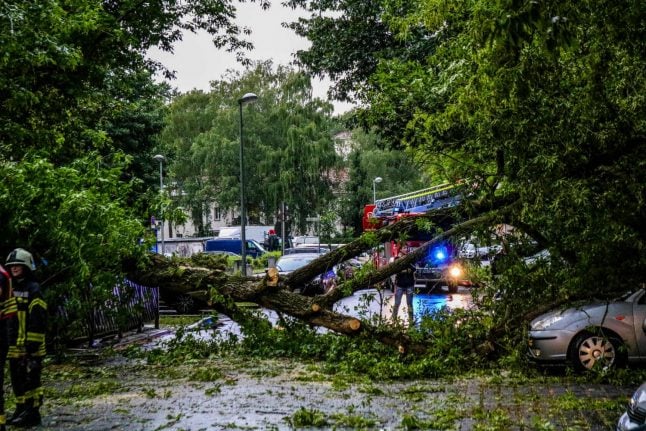 A fallen tree in Brandenburg during Wednesday's storms. Photo: DPA

Around 100 guests had gathered at the outdoor wedding in Blankensee, near Neubrandenburg in southern Mecklenburg-Western Pomerania, on Wednesday when the incident happened, police said.

Due to high winds, a large branch broke off from a tree around 8.30pm and fell from a height of four metres onto the group.

The guests had been attending a wedding in the centre of Blankensee, in the northern German state. Emergency services attended the scene and those who were injured were taken to surrounding hospitals.

Meanwhile in the city of Oranienburg in Brandenburg, 11 people suffered minor injuries after the top part of a tree broke off and hit them.

It came as severe storms hit eastern and northern parts of Germany. Due to the heavy rainfall, many streets were flooded and hurricane-like gusts of wind uprooted trees.

In Berlin alone, emergency services were called out on more than 200 operations in just two hours, from about 6-8pm on Wednesday. Due to the heavy rainfall, many streets were flooded and hurricane-like gusts of wind uprooted trees. A cyclist braves the rain during storms in Berlin. Photo: DPA

Operator Deutsche Bahn confirmed that due to “damage to the infrastructure” all long-distance connections in the Berlin city area were temporarily suspended. Technicians were on duty to inspect the damage.

The disruption lasted about two hours but delays continued into the night.

Meanwhile, there were reports of boats capsizing on the Wannsee lake in the west of the city.

In the city of Dresden, revellers heading to a Rammstein gig were affected. The Rudolf Harbig Stadium had to be cleared of water because of the rain. Fans had to leave the venue, but were allowed to return after an hour.

The start of the concert was delayed.

A series of summer storms have been lashing the country recently. In Munich on Monday, giant hailstones injured people and damaged cars and homes. The weather has also been causing severe disruption to the transport network.

Forecasters say the weather is expected to be calmer on Thursday. A meteorologist at the German Weather Service (DWD) said the risk of storms was much lower than on Wednesday. But there's still a chance of isolated thunderstorms and torrential rain in areas such as the Black Forest as well as in Thuringia and Mecklenburg-Western Pomerania.

All in all, it will be a bit cooler in Germany on Thursday. Temperatures on Wednesday had reached 34C in some places before the storm hit.

According to the DWD, the highest temperatures – around 26-28C – were likely in places such as Berlin. Bavaria and areas along the Danube, could also experience similar highs.

In the west it will be much cooler, with temperatures of around 14C in Saarbruken and 17C in Bremen.

We're aiming to help our readers improve their German by translating words in some news stories. Did you find this useful? Can we do anything else? Let us know.