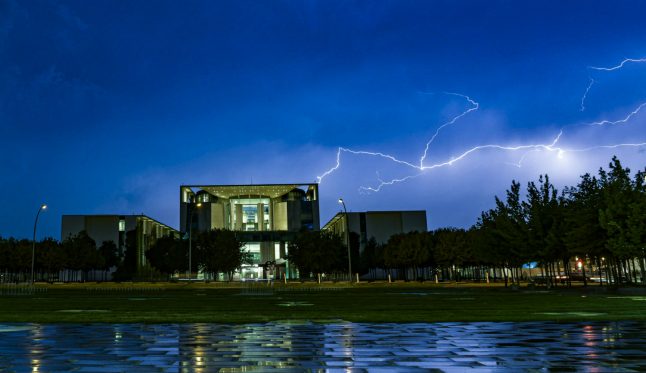 Lightning above the Federal Chancellery in Berlin on Tuesday night. Photo: DPA

The storms resulted in flooded streets, homes and roads as well as fallen trees – and fires caused by lightning strikes, reported broadcaster RBB 24.

Hailstones as big as table tennis balls – around five centimetres in size – were recorded by the German Weather Service (DWD) in Saxony and Brandenburg.

In Berlin and nearby Potstdam alone, emergency services were called out more than 300 times.

Due to flooding, sections of two important motorways had to be closed. The Stadtring (A100) at Kaiserdamm in the direction of Neukölln was still shut on Wednesday morning.

Traffic was being diverted via the Kaiserdamm exit, causing delays. Flooding in the west of Berlin. Photo: DPA

The A115 (known as the AVUS) between Spanischer Allee and Kreuz Zehlendorf was closed in both directions on Wednesday, a police spokesman said. The closure was causing traffic jams.

The Schlichtallee road in Rummelsburg between Haupt and Lückstraße was also closed. Other roads, including the Sachsendamm, became flooded.

Emergency forces had to pull several vehicles out of the water in the night. Traffic lights also failed throughout the city.

The Berlin S-Bahn was also affected by the weather. According to operator Deutsche Bahn, a lightning strike in Alt-Reinickendorf was causing delays and possible train cancellations on the S25 line.

Some ticket machines were not working due to power outages.

Passengers at both Berlin airports – Tegel and Schönefeld – faced delays as they were unable to board or disembark aircrafts for several hours between Tuesday evening and Wednesday morning. However, a spokesperson for the airports said take-offs and landings were possible.

The spokesperson could not say how many passengers were affected.

The Brandenburg state capital Potsdam was also hit particularly hard by the thunderstorms and torrential rain. Cellars and underground garages filled with water, streets were flooded, trees overturned and cars were damaged. In the Babelsberg district, a car got stuck in an underpass and had to be pulled out of the water by rescue teams. In the Bornim area, a house caught fire after lightning struck. The residents were able to get out in time and nobody was injured.

Giant hailstones, similar to the hail showers in Munich on Monday, were reported in Saxony and Brandenburg.

Meanwhile, in Prerow, in the northern German state of Mecklenburg-Western Pomerania, an apartment building caught fire after lightning struck. Luckily, nobody was injured.

In Bad Hersfeld in Hesse, thunderstorm warnings had an effect on the festival programme for Hessentag, an annual celebration held in the central German state. To be on the safe side, organizers cancelled Tuesday evening's events.

Forecasters have a warning in place for more storms in the east of the country on Wednesday. The warning is from 1pm until midnight on Thursday. Thunderstorms, giant hailstones, winds of up to 100km/h and heavy rain could be on the way.

In some places, such as parts of Saxony, huge amounts of rainfall is possible, a DWD spokesperson said.

The map shows the storm warning in eastern Germany on Wednesday, and the heat warning further east.

Temperatures in eastern Germany will remain very warm on Wednesday. According to the DWD, the mercury could climb to 34C, with the Brandenburg city of Frankfurt/Oder becoming particularly hot.

In western Germany it is becoming cooler, and in many places the temperature will remain below 20C.

The thunderstorms are expected to move east towards Poland in the night. The risk of storms in Germany decreases on Thursday and Friday.