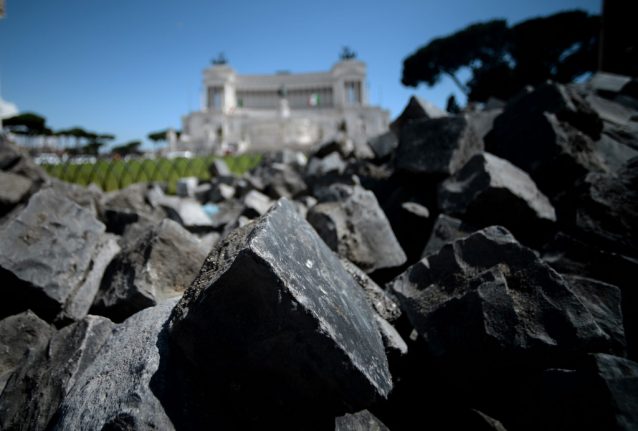 It's been dubbed the “Sampietrini Plan” after Rome's distinctive square cobbles (known as sampietrini for St Peter's Square, which they famously line): rip up the traditional paving from 68 main roads and replace it with tarmac, but keep the blocks and reuse them in smaller streets where only pedestrians have to contend with them.

The roads that will lose their cobbles include Via Nazionale, which runs between Piazza della Repubblica near Termini train station to Piazza Venezia, and Viale Aventino, the wide boulevard that passes by the Circo Massimo and Food and Agriculture Organization headquarters.

Their basalt cobblestones will be recycled in, among others, Via dei Condotti and Via del Corso, both busy shopping streets near the Spanish Steps. In total, 118 streets will get reused cobbles, Raggi told a press conference.

“This is something that has never been done before,” she declared.

The idea of getting rid of Rome's sampietrini isn't new: in 2005 the then mayor declared that the stones, a trademark of the city since the 16th century, would be phased out everywhere except pedestrian-only streets, though the roadworks required proved slow to emerge.

Authorities have long complained that the blocks are too expensive to maintain and replace, while the craftspeople specialized in laying them – known in local dialect as serciaroli – are ever harder to find.

Meanwhile road users have to contend with loose or missing cobbles that make for a bumpy ride (or walk) around central Rome, and become notoriously slippery when wet. Last year the Giro d'Italia had to be cut short when cyclists complained that it was too dangerous to race the final stage on Rome's treacherous roads. What's more, the stones don't absorb as much reverberation as asphalt, aggravating the structural risks to nearby buildings – not to mention the noise pollution – when heavy vehicles drive over them. The bone-rattling vibrations are thought to be among the reasons why so many Roman buses spontaneously burst into flames, since all that jiggling is liable to shake wires loose and start sparks.

Cobbles are far from the only problem with Rome's roads: built on sandy soil, and thousands of years' worth of ruins, the capital is prone to potholes that can open suddenly and dramatically under tarmac.

Combine that with a city council that's chronically short of funds and an unreliable public transport system that encourages some of the highest rates of car and scooter use in Europe, and you have a recipe for heavily used, poorly maintained streets.