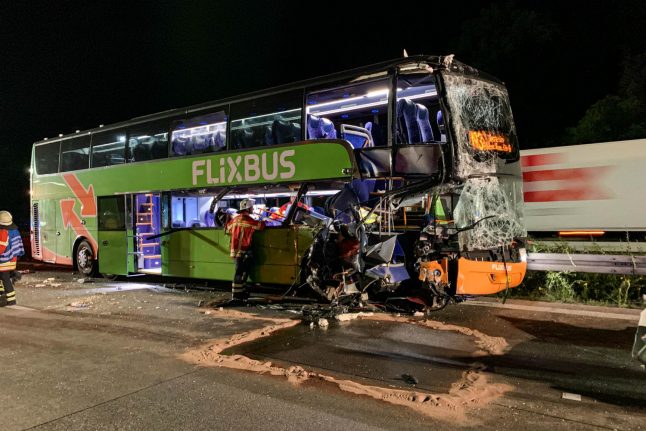 The Flixbus following the collision with a truck near Karlsruhe.

Three people were seriously injured after a Flixbus collided with a truck on the A5 near Karlsruhe. A fire brigade truck freed both of them from the coach.

Three people were moderately injured, and one was lightly injured. Rescue workers took them to hospitals.

The remaining 39 passengers on the bus, which was travelling from Munich to Amsterdam, were taken to a hospital in nearby Weingarten, where they were first attended to and later picked up by a replacement bus, reported Spiegel Online.

As of Wednesday morning, a northbound section of the A5 around the accident site remained completely closed, with a highway detour set up.

According to initial police findings, the Flixbus driver is not to be blamed for the incident. The truck driver involved wanted to pull into a parking lot, but the entrance was blocked by another truck, according to police.

Therefore he drove from the departure point of the lot into the right lane, where the coach could not avoid him any more. Firefighters on the Autobahn 1 extinguish the burning bus on Tuesday night. Photo: DPA

The crash was not the only trouble which a Flixbus bus encountered on Tuesday night. In another incident, a coach driver noticed several flashing hazard lights from other drivers on her way from Bremen to Hamburg.

At the Bremen intersection on the A1, she pulled over to the side of the road to check on her vehicle.

When she examined the coach more closely, she saw that the engine compartment was on fire.

The woman immediately evacuated the bus before the fire could spread inside of the bus. All 26 passengers were uninjured.

The fire brigade took the passengers to the nearest service area, where another Flixbus picked them up and took them to Hamburg.

The police closed the A1 completely for a few minutes, closing off one lane completely until 5 a.m.. Flixbus announced that it would investigate the fire in cooperation with authorities.

Flixbus, a popular intercity coach service, said it regretted both the incidents.

The accidents follow a Flixbus crash in late May, after which one person died and others were injured as a coach overturned near Leipzig.

SEE ALSO: One dead and dozens injured after Flixbus overturns near Leipzig Flixbus was not the only company with transport problems on Tuesday evening.

In Düsseldorf, more than 20 people were injured in the Lierenfeld district of the city when a tram carrying around 50 passengers derailed, reported RP Online.

According to the fire brigade, the victims were taken to hospitals by the rescue service.

No other vehicle was involved in the accident. Almost 60 emergency personnel assisted with rescues which lasted into the night.

This article was updated at 10:50 am Wednesday.

Aya Biran , a paternal aunt of Eitan Biran who was the sole survivor of a deadly cable car crash in Italy, arrives at Tel Aviv’s Justice Court on October 10, 2021. Ahmad GHARABLI / AFP

The battle for custody of Eitan Biran, the sole survivor of the May accident that killed 14 people, has captured headlines since his maternal grandfather, Shmulik Peleg, brought him to Israel on a private jet last month.

The child lost his parents, younger brother and great-grandparents in the May 23 accident near the top of the Mottarone mountain in the northwestern Piedmont region, where the family was out on a Sunday excursion to the scenic spot served by the cable car.

The cable car’s pull cable snapped just before it reached destination. It then flew backwards, dislodging itself from a second, supporting cable, and crashed to the ground.

Investigations later revealed that emergency brakes that could have stopped the car on its supporting cable, avoiding the tragedy, had been deliberately deactivated to avoid delays following a technical malfunction. The wreckage of a cable car that crashed on the slopes of the Mottarone peak above Stresa, Piedmont on May 23, 2021, killing 14. MIGUEL MEDINA / AFP.

Peleg has insisted that he drove Eitan from Italy to Switzerland before jetting him back to Israel – instead of returning him paternal aunt Aya Biran, who lives in northern Italy – because Eitan’s late parents wanted him to be raised in the Jewish state.

But Peleg has become the subject kidnapping probe by Italian prosecutors and Israeli police questioned him over those allegations last month.

A statement Monday from the Tel Aviv court where Aya Biran had filed a complaint said judges “did not accept the grandfather’s claim that the aunt has no custody rights”.

It recognised an Italian judgement that established Biran as a legitimate guardian and said Peleg had “unlawfully” removed the boy from his aunt’s care.

The court “ordered the return of the minor to his usual place of residence in Italy”.

The court also found that “a connection” between the surviving members of the Italy- and Israel-based relatives was in Eitan’s “best interests”. Shmuel Peleg, the grandfather of Eitan Biran, hugs a relative outside the Justice Court in the Israeli coastal city of Tel Aviv on October 8, 2021. Ahmad GHARABLI / AFP

The case has stirred emotions in Israel, and throngs of journalists had surrounded the Tel Aviv court for hearings last month, with some pro-Peleg protesters insisting it was wrong to send a Jewish child out of Israel.

Before judges ordered the sides to stop talking to the media, Peleg told Israel’s Channel 12 in September that his grandson was “in the place where he is supposed to be, in his home, in Israel.”

Eitan and his parents, Amit Biran and Tal Peleg, had been living in Italy, where Amit Biran was studying medicine, together with their other child, Tom.

Eitan suffered severe chest and abdominal injuries and spent a week in intensive care after the May accident that occurred when a cable snapped on the aerial tram bringing weekend visitors to the top of the Piedmont region’s Mottarone mountain.

The accident was one of Italy’s worst in over two decades.