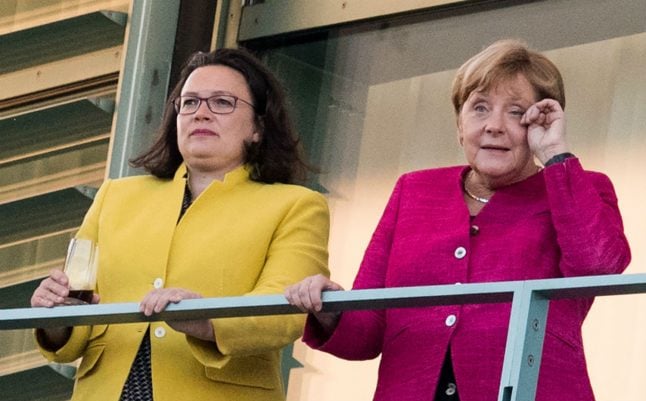 In an announcement that rattled Berlin, centre-left Social Democratic Party (SPD) leader Andrea Nahles said Sunday she was quitting her jobs as both party chief and head of its parliamentary group following a disastrous European election performance late last month.

“The discussions in the parliamentary group and the broad feedback from the party showed me that the support necessary for the exercise of my offices is no longer there,” said Nahles in a statement. The 48-year-old said she hoped her resignation “would open the possibility that the succession can take place in an orderly manner”.

Nahles, who formerly served as Labour Minister of the Social Democrats, became head of the SPD in April 2018, after leading the party's parliamentary group since September 2017. She is the first woman to chair the party.

It appears that Nahles failed to win over voters: This graph, translated into English by Statista for The Local, shows the SPD's polling ratings since Nahles took over as party faction leader in 2017. Will there be a snap election?

Maybe. If the SPD exits the 'grand coalition' it's currently part of along with its senior partner, the centre-right Christian Democratic Union (CDU) and Christian Social Union (CSU), then it could lead Merkel to head up a minority government, try and form an alliance with the pro-business FDP and the Greens or face a snap election.

However, some commentators have said the SPD is likely to remain in the coalition since it's in a fragile position.

READ ALSO: Why can't Germany's Social Democrats pull themselves together?

Merkel, who has said she will remain Chancellor until the end of the electoral term in 2021 and others in the CDU have sought to calm nerves by saying they stand by the coalition.

But CDU chief and Merkel successor Annegret Kramp-Karrenbauer conceded Monday that whether Germany goes to the polls before the end of the electoral term would depend on the SPD's next move.

“We are ready to keep this coalition going. How the SPD behaves is its decision,” she told journalists following crisis talks within her centre-right party.

She warned however that given the international challenges, it would be “anything but productive if Germany were to go into a government crisis or a lengthy election campaign”.

Denying that the issue of snap elections was broached in Monday's talks, she added however that “you can be certain that the CDU is prepared for whatever comes or does not come”.

At a separate press conference, Merkel batted away speculation that her coalition was crumbling.

Insisting that she did “not see a signal of instability”, Merkel said: “At the moment I only see that the SPD has reached specific decisions which I can't say would hinder us from working.” Who will lead the SPD now?

Interestingly, the leadership crisis at the SPD could not have come at a worse time for the CDU, which was itself struggling to halt a haemorrhage of voters as the younger generation shuns it in droves for the Greens.

The SPD meanwhile has been scrambling to find a new leader to replace Nahles, 48.

It was announced Monday that three SPD politicians, including two state premiers, will provisionally lead the party following Nahles' resignation.

Manuela Schwesig, Malu Dreyer and Thorsten Schäfer-Gümbel, the three vice presidents of the SPD, are set to lead the party until a successor to Nahles as party leader is elected.

The trio was revealed as the interim leaders following a meeting of the party executive board in Berlin. Schwesig is state premier in Mecklenburg-Western Pomerania, while Dreyer is premier in Rhineland-Palatinate. Meanwhile, while Schäfer-Gümbel is the leader of the opposition SPD faction in Hesse state parliament.

The SPD, Germany's oldest political party, is reportedly not due to elect a new party leader until December's party conference. But it is likely that a decision will be taken to move the vote forward. The party's executive board is due to meet later this month.

Why is the SPD imploding now?

It's been a long time coming and has been predicted by many.

In the May European Parliamentary election, support for the party nearly halved to 15.8%, while the party lost its traditional stronghold of Bremen, coming in second to CDU.

READ ALSO: The winners and losers: Six things to know about the EU election in Germany

But the alliance between Merkel's Christian Democrats and the SPD was fragile from the start. Wounded by an election drubbing in 2017 in which the SPD gained just 20.5 percent of the vote, the party had initially sought to go into opposition, but was reluctantly coaxed into renewing a partnership with Merkel. Many within the party however remained wary of continuing to govern in Merkel's shadow (they had been in a coalition with the CDU since 2013)  and the parties have since lurched from crisis to crisis.

Yet it should be noted that Nahles (and the SPD) have helped shape government policy, such as the introduction of a nationwide minimum wage. The party was also key to pushing through the legalization of same sex marriage in Germany.

What else is the SPD thinking about?

The SPD has been staring at the prospect of another debacle in three upcoming state polls in Saxony, Brandenburg and Thuringia, where the far-right AfD is poised to make significant gains.
With its anti-immigration campaign, the AfD in 2017 drew voters angry with Merkel's decision to let in more than a million asylum seekers into Germany.
But nationwide the Greens may have become the biggest headache for the SPD. While sharing the centre-left position on the political spectrum, the Greens are proving more attractive to young voters because of their environmentalist platform.
In a national survey released Saturday, the Greens came in top for the first time – enjoying slightly more support than Merkel's CDU-CSU alliance.
The environmentalist party had a lead over the SPD of around 15 percentage points.

Pointing to the more than 1.2 million refugees and asylum seekers welcomed by Germany in 2015 and 2016, at the height of migrant crisis sparked especially by the war in Syria, the UNHCR selection committee hailed Merkel’s “leadership, courage and compassion.”

At the time, the woman who lead the German government for 16 years said the situation “put our European values to the test as seldom before. It was no more and no less than a humanitarian imperative.”

“By helping more than a million refugees to survive and rebuild, Angela Merkel displayed great moral and political courage,” he said in a statement.

“It was true leadership, appealing to our common humanity, standing firm against those who preached fear and discrimination,” he said.

“She showed what can be achieved when politicians take the right course of action and work to find solutions to the world’s challenges rather than simply shift responsibility to others.”

READ ALSO: Five years on: How well did Germany handle the refugee crisis?

The selection committee highlighted that in addition to protecting people forced to flee war, Merkel was the driving force behind Germany’s collective efforts to receive them and help them integrate into society.

The Nansen Award, awarded annually, was created in 1954 in honour of the first UN High Commissioner for Refugees, Norwegian Arctic explorer and  humanitarian Fridtjof Nansen, to mark outstanding work on behalf of refugees.

Merkel will receive her award and the $150,000 in prize money at a ceremony in Geneva on October 10th, where four regional winners will also be honoured.