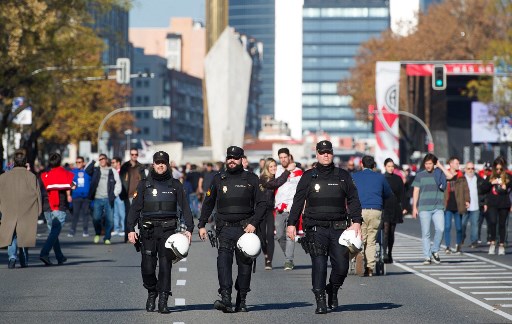 Extra police will be on duty for the Champions League Final. File Photo: AFP

The security measures for the match between Liverpool and Tottenham will surpass those put in place for last year's “high risk” Copa Libertadores final between Argentine rivals River Plate and Boca Juniors in Madrid, said the director general of Spain's National Police, Francisco Pardo Piqueras.

“This will probably be the biggest deployment to guarantee security which we will carry out at a sporting event,” he told a news conference.

The security operation will involve over 2,000 national police officers, as well as police from other forces, firefighters and private security guards, the Spanish government said in a statement.

Some 32,000 English fans are expected to watch the final at the 68,000-capacity Wanda Metropolitano Stadium.

Thousands more fans without a ticket to enter the stadium are expected to come to Madrid from Britain as well as from southern Spain and neighbouring Portugal, which have large English expat communities.

Spain's National Police force have set up a dedicated twitter account  at @policia_uclftfc for matters relating to the Champions League Final which will be in English so visiting fans can understand it. The latest tweet was warning fans to prepare properly for the sunny weather.

Madrid is already preparing for the Champions Final. Do it yourself.

It is expected that Saturday June 1 will be sunny in the Spanish capital, with max temperatures of 33º C and min of 17º C.

If you're going to the final, prepare appropriate clothing. #UCL #policia_Tottenham pic.twitter.com/vMq74yi10N

Nearly 4,000 police and private security guards were deployed for the Copa Libertadores final last year at the Santiago Bernabeu stadium.

The last time the Champions League final was held in the Spanish capital was in 2010, when Inter Milan defeated Bayern Munich 2-0. UEFA have organised a festival of football for fans to coincide with the Champions League final. converting four squares in the very centre of the city into hotspots.

Plaza Mayor, Puerta del Sol, Plaza de Callao and Plaza de Oriente – will all have activities for football fans beginning on Thursday and continuing until Sunday – all of them are open to the general public and are free to attend.

The festival kicks off with the arrival in Sol on Thursday at 11am of the Champions League trophy.  Fans will be able to take selfies with the cup, while Plaza Mayor has been converted into a football pitch where mini-matches will take place.

Music events from DJs  Dimitri and Like Mike in Sol to Colombian singer Carlos Vivas will be performing at different events in the plazas.

A guide to the Champions League festival in Madrid has been produced by Madrid City hall and can be downloaded HERE.

Two distinct fan zones have been set up in different parts of the city ahaed of the match where fans of the two teams can meet up before travelling to the Wanda Stadium.

Liverpool fans have been designated Plaza Felipe II for their Fan Zone – the square, with Salvador Dalí's Dolmen statue at one end, is not particularly big but there are plenty of bars close by and there is at least some shade from the sun. (Metro: Goya – Linea 2, the Red Line)

Spurs' Fan Zone is down the road at the Plaza de Colón between Recoletos and Calle Serrano, recognisable by the monument to Christopher Colombus and the enormous Spanish flag on the far end near to Serrano; it's more open and there are less bars close although trees provide some shade.

However, bars in close vicinity to both squares have expressed worries about overcrowding and 'hooliganism' and some owners have threatened to close during the match.

The fan zones are scheduled to close at 6pm – supposed to allow fans with tickets time to travel to the match – at which point all fans will be kicked out.

City Hall authorities are insisting that they will not be setting up big screens in public areas in order to broadcast the match.  A policy that was speculated to be in place as to dissuade fans without tickets for the match coming to the city.

It was rumoured that City Hall would in fact put up bog screens but only announce it at the last minute to discourage the influx of people. But by Wednesday morning, city hall still insisted there were to be no big screens.

A file photo of a camel in a zoo. Photo: ATTILA KISBENEDEK / AFP

It was not immediately clear how the long-legged runaways managed to get out but Quiros Circus, which owns them, blamed sabotage by animal rights activists.

They were spotted at around 5:00 am wandering around the southern district of Carabranchel close to where the circus is currently based.

“Police found them and took care of them so they could be taken back safe and sound,” they tweeted.

There was no word on whether the rogue revellers, who are known for spitting, put up any resistance when the police moved in to detain them.

Mati Munoz, one of the circus’ managers, expressed relief the furry fugitives — Bactrian camels who have two humps and thick shaggy coats – had been safely caught.

“Nothing happened, thank God,” he told AFP, saying the circus had filed a complaint after discovering the electric fence around the animals’ enclosure had been cut.

“We think (their escape) was due to an act of sabotage by animal rights groups who protest every year.”

Bactrian camels (camelus bactrianus) come from the rocky deserts of central and eastern Asia and have an extraordinary ability to survive in extreme conditions.

These days, the vast majority of them are domesticated.