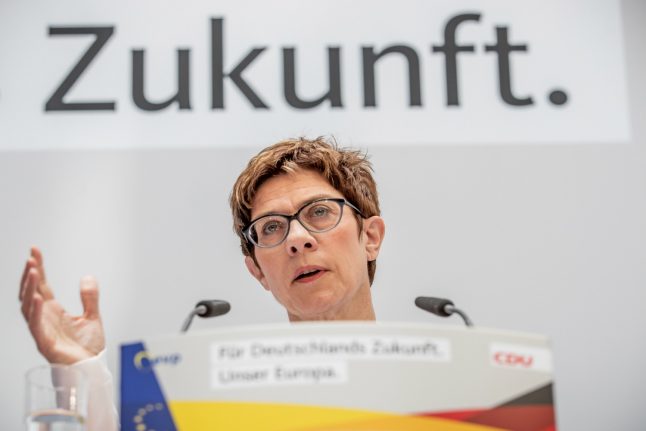 Critics have accused Annegret Kramp-Karrenbauer of discussing “censorship” and of failing to take responsibility for the CDU’s heavy losses in Sunday's European elections. The CDU and its Bavarian sister party CSU won 28% of the vote — a drop of more than seven percent compared to the 2014 vote.

Kramp-Karrenbauer, known as AKK in the German media, made the comments in reference to a YouTube video posted by influencer Rezo. In the 55-minute clip called “The destruction of the CDU”, Rezo accused the government coalition, which includes the centre-left Social Democrats, of making policies “for the rich” while failing to act on crucial issues like global warming.

Published online on May 18th, the video has been viewed millions of times, throwing Merkel's Christian Democratic Union (CDU) party into crisis-fighting mode.

CDU politicians initially hit out at Rezo accusing him of false claims or oversimplifying the issues, before taking a more conciliatory tone, inviting him to meet them and talk.

AKK, however, remained a harsh critic, asking if the CDU should also be held responsible for the plagues that had occurred Egypt.

On Friday, Reza's message became stronger after some 70 popular YouTubers joined him in a riposte explicitly telling voters to shun the parties in Merkel's coalition ahead of the elections.

“What would actually happen in this country if, say, 70 newspapers decided just two days before the election to make the joint appeal: 'Please don't vote for the CDU and SPD'?” Kramp-Karrenbauer, Chancellor Merkel's successor as CDU leader, said on Monday after committee meetings with her party.

“That would have been a clear case of political bias before the election.” Kramp-Karrenbauer said there were important questions to be addressed in this topic, including: “What are the rules that apply to opinions in the analoge sphere? And which rules should apply in the digital sphere?”

These are questions “we will discuss – not just in the CDU… rather, I'm quite sure, they'll play a role in discussions surrounding media policy and democracy in the future,” she said.

READ ALSO: The winners and losers: Six things to know about the EU election in Germany

Kramp-Karrenbauer's comments sparked an outcry and calls for her resignation.

Free Democrats chairman Christian Lindner wrote on Twitter: “AKK is considering the regulation of opinions expressed before elections…I can hardly believe that. On the contrary, we need more open debates, even in social media.”

Niema Movassat, parliamentary director of The Left parliamentary group in the Bundestag, called Kramp-Karrenbauer's remarks an “unprecedented attack on freedom of expression”. The CDU leader “should resign immediately”, she said.

High profile Alternative for Germany (AfD) politician Georg Pazderski said: “After the bitter CDU electoral defeat in the EU elections, AKK is bringing censorship of the Internet into discussion before elections.” He accused the CDU leader of focusing on this topic out of fear ahead of state elections in eastern Germany later this year, where the AfD is set to make huge gains, reported the Tagesschau.

The Greens parliamentary party leader in the Bundestag, Katrin Göring-Eckardt, said: “I believe that AKK should not blame others for the CDU result. Those who don't tackle the climate crisis will lose.”

Kramp-Karrenbauer later said in a Tweet that it was absurd to “accuse me of wanting to regulate expressions of opinion”.

She added: “Freedom of expression is held highly in democracy. But what we have to talk about are rules that apply in election campaigns.

“When influential journalists or YouTubers call for people not to vote, or even the destruction of centrist democratic parties, it is a question of political culture. It is the centrist parties who defend democratic values every day.”

In the video, Youtuber Rezo, who said he and his colleagues had spent weeks meticulously researching the CDU and the CSU, said the government, which includes the centre-left Social Democrats, was “destroying our lives and our future”.

In a message aimed at the coalition, Rezo said: “[If] you say that young people should be political, then you have to handle it when they think your politics are shit.”