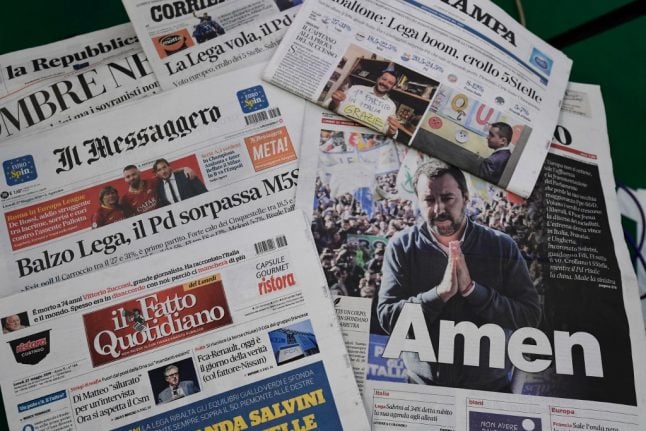 Here's how the numbers compare between these European elections and the ones five years ago.

The only parties to increase their share were the rightwing-populist League (by a massive +28.1 percent) and far-right Brothers of Italy (+2.8 percent). YouTrend's comparison of the EU results with previous European and Italian general elections.

The centre-left Democratic Party suffered the greatest loss (-17.4 percent), but that's largely because of the size of its record win in 2014, when it got the best results of any Italian party in European elections ever.

But context is important: FI's result is better than many had predicted, assuring Berlusconi a seat in the European parliament and a place in the League's rightwing coalition, should its triumphant leader Matteo Salvini push for early elections in a bid for the top job.

READ ALSO: How EU elections could lead yet another Italian government to collapse

The Five Star Movement's numbers, however, are “an even worse disaster than anticipated”, according to political scientist Daniele Albertazzi of the University of Birmingham in the UK. Weakened by falling support, they'll seek to maintain their coalition government with the League and avoid another vote that risks knocking them out of power, he predicts.

The two votes aren't comparable: turnout in EU elections is far lower, for a start (56 percent compared to 73 percent in the general election of 2018).

But inevitably people are looking at the EU results as a possible indication of how Italy would vote in a new national election, which some are speculating could come as soon as 2020.

Here are the EU results next to the 2018 election outcome: Once again the League shows the biggest gains. But it's also good news for its opponents the Democratic Party, which suffered one of its worst ever electoral defeats in March 2018. The EU results are encouraging for the party's new leader, Nicola Zingaretti, who looks to be regaining some of the ground lost under the PD's polarizing former leader, Matteo Renzi.

“We'll use the strength of this result to build a plan for Italy, to propose the alternative to Salvini and get ready for a vote whenever it may be,” Zingaretti said.

But if Italy were to go to the polls early, the EU results still indicate the PD wouldn't win: the rightwing coalition between the League, Forza Italia and Brothers of Italy remains the strongest grouping by some way.