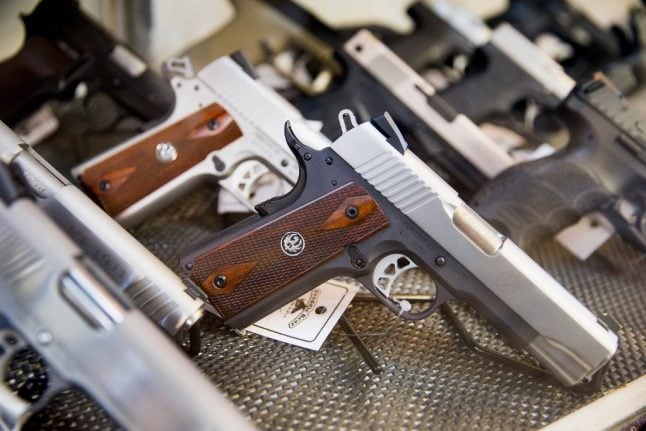 Sunday's referendum will see Swiss voters decide whether the country should tighten its gun laws by adopting the European Union's revised Firearms Directive.

If voters don't back the changes, Switzerland could be could out of Europe's Schengen border-free area – which the Swiss government argues cost the country billion of Swiss francs.

But there is strong opposition to tighter gun controls in Switzerland, where military service is compulsory and plenty of people are comfortable around firearms.

Below are eight figures which help explain Switzerland's complicated but close relationship with guns.

Three: This is the number of mass shootings in Switzerland in the last 20 years. In the worst of these, a man entered the parliament building of the canton of Zug in late September 2001 and killed 14 politicians with four different guns. He then killed himself. In the second incident, in February 2013, a worker used a gun to kill four employees before dying from gun wounds himself at the Kronospan wood processing plant in Menznau in the canton of Lucerne. And in 2015, a man in the canton of Aargau killed his parents-in-law and his brother-in-law as well as a neighbour before turning the gun on himself.

Read also: What you need to know about Switzerland's crucial gun control referendum

13 percent: This is proportion of Swiss who kept their service weapon after completing compulsory military service in 2018. The total number of rifles taken home was 2,287 and the total number of pistols was 811. That was down from 43 percent in 2004 (when just over 20,000 rifles and around 11,800 pistols were taken home).

The decline has two chief causes, according to Swiss daily Basler Zeitung. In 2005, the army introduced an administrative fee (100 Swiss francs, or €88, for rifles and 30 francs for pistols) for those wish to keep their weapons. Then, in 2009, the army introduced tougher new requirements. These include the need to apply for a weapons licence and, for rifles, being able to prove that you have regularly participated in target shooting.

By contrast, the United States saw 11,208 firearms homicides by firearm in 2013, according to the US Centers for Disease Control and Prevention. This is about ten times the Swiss rate for such murders. (Police officials gather at the scene of a shooting outside a branch of UBS bank in Zurich on February 23, 2018. Two people were shot dead in central Zurich. AFP)

The reasons for this decline are not known, but it has been speculated that the smaller number of army weapons in Swiss homes could be partly responsible. This is because fewer people are choosing to purchase their service weapons (see the section '13 percent' above) when they complete military service, and because the Swiss army is now smaller. The overall suicide rate in Switzerland was 12.96 per 100,000 inhabitants against the European Union average of 10.91 percent according to Eurostat. However, the proportion of suicides in Switzerland involving the use of firearms is very high by European standards.

865,000: This was the number of weapons listed in cantonal registers in Switzerland in 2018.

2,332,000: This is the estimated number of civilian-held firearms in Switzerland, according to Geneva-based Small Arms Survey. The figure includes former service rifles taken home by recruits who have completed their military service. Also included in the data for Switzerland are an estimated 1,540,281 unregistered firearms – a figure that is very difficult to establish and which can comprise everything from tailor-made sports rifles to crude, ‘home-made' hunting guns, depending on the country.

TRAVEL NEWS
EXPLAINED: Which Schengen area countries have border controls in place and why?
Url copied to clipboard!