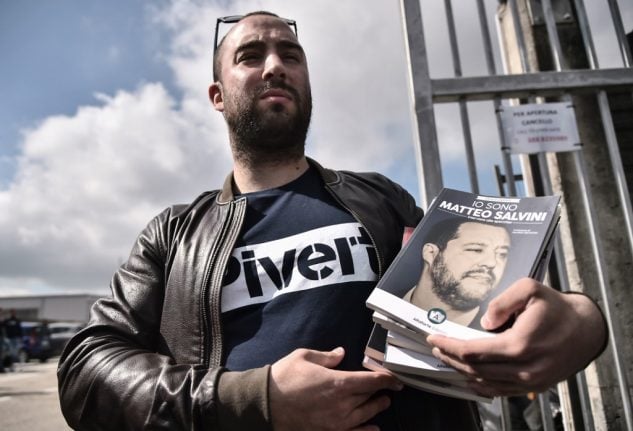 Francesco Polacchi of publisher Altaforte with a copy of a new book about Interior Minister Matteo Salvini. Photo: Tiziana Fabi/AFP

Francesco Polacchi, head of the Altaforte publishing house, was stopped at the doors to the exhibition with his latest release, a book of interviews with Salvini, who is interior minister and head of the anti-immigrant League party.

The city of Turin filed a complaint against Polacchi on Wednesday over statements to the media in which he described dictator Benito Mussolini as “the best Italian statesman” and said “a little dictatorship” did “no harm”.

There had been growing calls for Altaforte, which has ties to the Italian neo-fascist party CasaPound, to be excluded, with the Auschwitz-Birkenau state museum saying it would lead a boycott of the international fair.

Any apology for fascism is illegal in Italy, and punishable by six months to two years in jail.

“I have been denounced for the crime of having an opinion,” said Polacchi, who described his exclusion as “an attack on the interior minister”. He told journalists outside the fair that the book on Salvini would be launched in Turin this weekend at a new location.