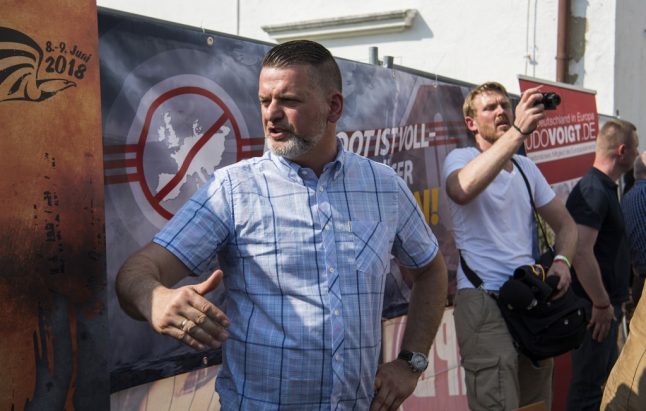 The Federal Constitutional Court late Saturday upheld rulings by two lower tribunals that the free-speech rights of the National Party of Germany (NPD) had not been violated.

ZDF public television had opted not to show the NPD commercial for next month's European elections, which claimed that “migration kills” and called for “protection zones” for Germans.
The broadcaster had decided that the advert amounted to incitement of racial hatred, a crime in Germany. The NPD disputed this claim in a Facebook post on Thursday.
ZDF's assessment had been backed by the superior administrative court in Rhineland-Palatinate state as well as the administrative court in Mainz, where ZDF is based.
The Constitutional Court said in a statement that it had rejected the NPD's appeal as there were “no grounds to think that the courts failed to uphold the plaintiff's freedom of speech”.
Fellow public broadcaster ARD has also refused to show the commercial, which was due to run from April 29 to May 15. It said it was unaware of any legal challenge to the decision by the NPD.
The NPD has seats in many town halls in the ex-communist east of the country but has negligible poll ratings at the national level.
Germany's upper house of parliament lost a bid in 2017 to ban the NPD, as the Constitutional Court ruled the xenophobic fringe group was too insignificant to pose a real threat to the democratic order.
The far-right AfD party, which has also railed against Chancellor Angela Merkel's decision to allow in more than one million asylum seekers during a 2015-16 influx, is polling around 10 percent ahead of the European Parliament elections.

At a rally in Wiesbaden in July 2020, a protester holds a sign that says: Solidarity with those affected by NSU 2.0”. Photo: picture alliance/dpa | Arne Dedert

The 53-year-old unemployed German national had been convicted in the past of crimes linked to the far right, the prosecutor’s office for the western city of Frankfurt said.

He is “strongly suspected” of having sent, since August 2018, a series “of threatening letters with hateful, insulting and threatening content” under the pseudonym “NSU 2.0”, the prosecutor said.

The name refers to the National Socialist Underground, a neo-Nazi extremist group uncovered in 2011 that murdered 10 people and planted three bombs.

The letters were mainly addressed to public officials, notably members of the federal parliament and that of the Hesse region.

Investigators had initially suspected that the man was linked to the police themselves, as information on the people threatened had been collected from police stations.

But prosecutors said the person detained was not a police officer. The suspect was taken into custody at his Berlin apartment during a search.

The assassination in June 2019 of pro-migration politician Walter Lübcke shocked the country and highlighted the growing threat of right-wing extremism.

Previously, the NSU was able to carry out the murders of eight Turkish immigrants, a Greek and a German policewoman as investigators focused their probe in error on members of Germany’s immigrant communities.