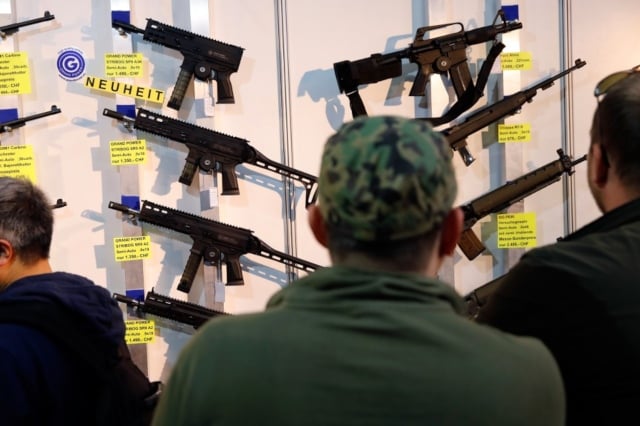 Visitors at the Arms Trade Fair, in Lucerne on March 29th. Photo: AFP

A total of 55 percent of people surveyed said they were likely to back the reforms in an upcoming May referendum, according to a poll run by Swiss media group Tamedia in mid-April.

This is two percentage points higher than the 53 percent support registered in a survey run earlier this month and pollsters say the latest results demonstrate an upward trend in support for the reforms to Swiss weapons rules.

Ostensibly, the May 19th referendum will see Swiss voters asked if they back tighter rules on semi-automatic weapons introduced in the EU in the wake of terrorist attacks across Europe in recent years.

But if Swiss voters fail to back the reforms, Switzerland could be forced to leave the visa-free Schengen travel region, which could cost the country billions of francs a year, according to the Swiss government.

In fact, the most common argument cited for backing the proposed gun laws by people surveyed by Tamedia was that doing so would ensure Switzerland remained part of Schengen.

The May 19th referendum was promoted by Swiss shooting organizations with the backing of the conservative Swiss People’s Party (SVP).

Opponents of Swiss adoption of the new EU weapons law see it as an attack on the right to own weapons. They also argue it would lead to a red-tape nightmare with sports shooters required to obtain special permits to use what would essentially be “banned weapons” to practice their sport.

The EU has already granted Switzerland a controversial special exemption in the revised EU Firearms Directive which means standard-issue weapons can be taken home and used after military service has been completed.