Cristiano Ronaldo was signed from Real Madrid for 100 million euros ($112 million) before the start of the season, in a bid to end the Turin giants' 23-year wait for the Champions League trophy.

The 34-year-old left Real as their all-time top scorer, a record he also holds in the Champions League where he is the only player to have won five titles.

Despite their European exit to Ajax, the Portuguese superstar was a key player throughout the campaign with 19 league goals. Both Juventus' Serie A defeats came in his absence — 2-0 to Genoa on March 17 and 2-1 to SPAL on April 13 — the latter frustrating their bid to wrap up the title with a record six games to spare.

The five-time Ballon d'Or winner, who was defended by Juve last year after being accused of rape, was slow off the mark, having to wait until their fourth game against Sassuolo before scoring a double in a 2-1 win.

“Cristiano is the future of Juventus, he has had an extraordinary season,” said coach Massimiliano Allegri after the Champions League loss.

The 19-year-old, who provides an alternative to Mario Mandzukic and Paulo Dybala up front, admitted: “I learn from Cristiano Ronaldo in training, I steal his secrets.” Born in Italy to Ivorian parents, his first league appearance this season was just four minutes away against Fiorentina on December 1, with his first goals a double in a 4-1 win over Udinese on March 3.

Controversy overshadowed his only full match for the champions when he was subjected to racist abuse against Cagliari on April 2.

The youngster hit back by scoring in Sardinia and again in the following game against SPAL.

Leonardo Bonucci returned to Turin after an unhappy season at AC Milan to recreate the so-called 'BBC' defensive partnership alongside veterans Giorgio Chiellini and Andrea Barzagli.

The absence of the trio through injury was felt when Juventus conceded six goals in two games including a 3-3 draw with Parma on February 2 — days after being eliminated from the Coppa Italia. “Mr Bonucci and Mr Chiellini could teach lessons at Harvard University about how to be a central defender,” said Manchester United coach Jose Mourinho.

Juventus have conceded only 23 goals in 33 games, the best record in the division.

Polish goalkeeper Wojciech Szczesny has proven to be a worthy successor to Juventus and Italy icon Gianluigi Buffon, who left for Paris Saint-Germain.

The ex-Arsenal player arrived in Turin in 2017 after falling down the pecking order at the Premier league club. The 28-year-old got off to a stuttering start in the season opener, conceding two goals in a 3-2 win at Chievo, but has conceded only 15 goals in the 24 times he has played so far this season.

New arrival Mattia Perin, who joined from Genoa last summer, has proved less effective with eight conceded in nine games, and was between the posts for both their league defeats.

Massimiliano Allegri doesn't mind winning ugly as he claimed his fifth league title in as many years with Juventus, and sixth in Serie A after leading AC Milan to their last title in 2011.

Allegri — who has now won 11 trophies with Juventus — has strenuously defended his team's often-criticised style of play, despite Juve leading the way in the Italian top flight with 67 goals scored.

“Beautiful football doesn't pay off, at the end of the day you've got to just kick it away from your goal,” the 51-year-old fumed after the draw with Parma.

“They need to realise there is no shame in hoofing the ball into the stands if needs be.” 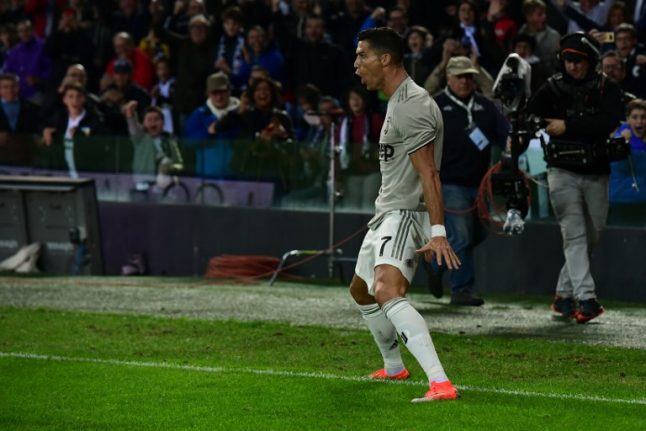 Ronaldo celebrates after scoring against Udinese Calcio on Saturday. Photo: MIGUEL MEDINA / AFP
The Portuguese striker lashed in the second goal after 37 minutes from the left following a cross from Croatia's Mario Mandzukic, four minutes after Rodrigo Bentancur's opener.
It was Ronaldo's fourth goal this season for Juventus, with the 33-year-old celebrating wildly with his teammates, as the Italian champions claimed their tenth consecutive win in all competitions.
Ronaldo remained tight-lipped after the game, giving a thumbs up as he left the dressing room where he was greeted by fans shouting “Cristiano! Cristiano!”
The superstar showed no sign of the immense pressure he is under amid damaging accusations which threaten his multi-million euro sporting empire. US police on Monday re-opened an investigation into claims by former American model Kathryn Mayorga that the five-time Ballon d'Or winner raped her in a Las Vegas hotel in June 2009.
“I don't know how things are for him at home, I don't live with him,” said Juventus coach Massimiliano Allegri. “What I know is what I see on the pitch. He trains hard, he is serene and today he scored an extraordinary goal.”
Juventus — with a maximum 24 points from eight Serie A games — open up a nine-point lead on second-placed Napoli who host Sassuolo on Sunday.
'Stronger than the mud'
With the eyes on the world on Ronaldo the match against lowly Udinese, in a small town not far from the border with Slovenia, attracted journalists from as far afield as China.
But the 'Ronaldo affair' appeared to have in no way dented the player's popularity among the fans who packed the 25,000-seater Stadio Friuli. He was greeted by the enthusiastic cries of dozens of children waiting for the team buses before the game, with one child running onto the pitch during warm-up to ask for his autograph.
“Stronger than the mud,” headlined Turin daily Tuttosport, a traditional backer of Juventus, above a photograph of Ronaldo dining with the team this week, and a bigger picture of the star smiling.
“CRSexe,” was the front-page headline on Rome-based Corriere dello Sport on Saturday, referring to the allegations. Another headline said “World of Juve shaken” after the club's share price plunged almost 10 percent on Friday.
The back page was dominated by an advert for Ronaldo's line of underwear, featuring a full-page photograph of the player bare-chested.
Ronaldo has hired David Chesnoff, known as the lawyer of the stars, to defend him. The Las Vegas-based criminal lawyer has already worked with well-known athletes like Shaquille O'Neal, Mike Tyson and Andre Agassi.
After initially dismissing the rape claims as “fake news” on Instagram, Ronaldo took to social media during the week to “firmly deny” the accusations.
“Rape is an abominable crime that goes against everything that I am and believe in,” he said on his Twitter feed, which has 75 million followers.
Sponsors concerned
However, there have been off-field consequences to the controversy. Just two weeks ago, shares in Juventus rose 180 percent to a record level of over 1.80 euros. On Friday, they closed down 9.92 percent at 1.19 euros on the Milan stock exchange.
Nike has said it is “deeply concerned” by the allegations against one of their marquee athletes whose relationship with the US sportswear giant is rumoured to be worth $1 billion (€869 million).
EA Sports, for whom Ronaldo is a leading figure in their phenomenally successful FIFA video game market, also described the allegations as “concerning”.
Juventus have so far stood behind the player who moved to Turin in the summer in a €100 million ($115 million) deal from Real Madrid. However, the Italian club's reaction to the issue has angered some fans as “dismissive” and “insensitive”.
Juventus sporting director Fabio Paratici, nevertheless, underlined the club's support on Saturday.
“We have already made clear our total support for the player, who has always been very active on social issues and been a great professional beyond reproach, as confirmed by his teammates,” Paratici told Sky Sport Italia. “We are behind him all the way. He has been an exemplary professional and an exemplary person throughout his career.”
Before Saturday's game Ronaldo had received encouragement from his mother.
“Best wishes son for you and your team, because together we are stronger. Go Juventus,” wrote Maria Dolores Alveiro on Instagram, alongside a photo of Ronaldo embracing her.
By AFP's Stanislas Touchot
Url copied to clipboard!