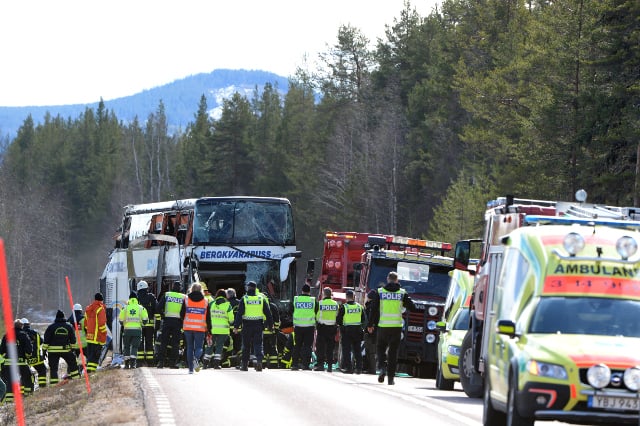 The bus had driven almost 600 kilometres overnight from Skene in south-western Sweden to Sveg when it ran into trouble and went off the E45 road at 7am on April 2nd, 2017.

Three people died and of the 59 people on board the bus – 52 pupils aged 14-15 and seven adults on their way to the school's annual ski trip in Jämtland – 38 were injured in the crash.

The driver said at the time that potholes may have caused him to lose control of the bus, but he was charged with reckless driving, causing bodily harm and involuntary manslaughter.

On Wednesday Borås District Court cleared him of all charges.

It said that although the driver had lost control of the bus as a result of reduced ability to concentrate due to a lack of sleep, the prosecutor had failed to prove that he had realized he was too tired to operate the vehicle.

When the crash happened, the driver, in his 60s, had been on his shift for around eight hours since the departure the previous evening and had neither eaten nor had anything to drink. He had tried to stop a number of times at fuel stations along the way to buy something to eat, but the shops had all been closed.

The official accident investigation found that several factors had contributed to the crash:

The speed limit was set to 100 km/h despite the road being very narrow.

Fewer than a third of the passengers were wearing seatbelts when the crash happened; those without seatbelts included everyone who died and four of the five most seriously injured.

The driver's concentration level was reduced, at least temporarily.

His employer, the bus company, had not properly anticipated the risks of nighttime work.

“The driver followed the itinerary set up by his employer and used by other bus drivers for 15 years. The district court's conclusion is therefore that the driver cannot be considered to have been legally guilty of negligence when he started the journey according to the itinerary, nor during the journey, because he neither realized nor should have realized that he was too tired or sleepy to be able to operate the bus in a safe way,” said the court.