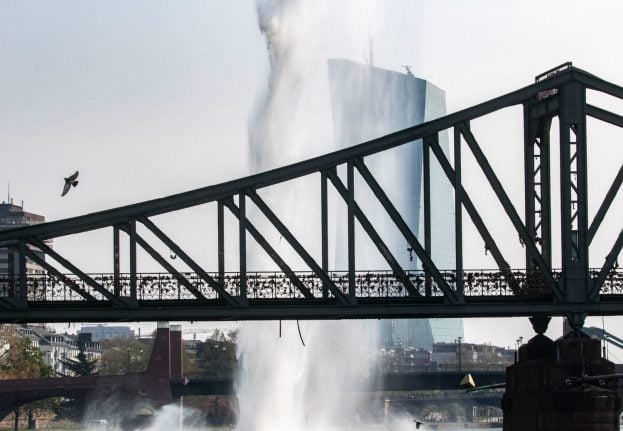 The bomb was detonated on Sunday morning. Photo: DPA

As the video shows, the detonation on Sunday morning resulted in a 30 metre high water fountain in the Main river.

Around 600 people were evacuated from parts of the city near where the device was found, as bomb disposal experts got to work at about 8am.

Following the explosion, divers were sent to check that the device was safe. “It has been confirmed that the bomb is no longer a danger,” said a police spokesman on Sunday.

According to DPA, the US bomb, weighing in at a hefty 250kg, was discovered on Tuesday during a training exercise by divers of the city's fire and rescue service.

Road and shipping traffic, as well as public transport, was affected during the bomb detonation. Church services near to the scene were also cancelled, while some museums remained closed.

In order to prepare for the blast, a special group of divers from the explosive ordnance disposal service in Rhineland-Palatinate were asked to assist.

250kg bomb from the second world war just blown up in Frankfurt… pic.twitter.com/hmOQl0RP2c

Before the bomb was exploded, the divers moved the device deeper into the Main river, to a depth of around 6 metres.

A series of smaller explosive devices were detonated before the bomb in order to drive away fish and other animals.

Some onlookers watched the explosion from one of Frankfurt's neighbouring bridges.

Throughout Germany, World War II bomb finds – resulting in city evacuations during their detonation – are commonplace.

SEE ALSO: What you need to know about WWII bomb disposals in Germany

At the end of March, 10,000 people were evacuated in Rostock after a WWII bomb discovery.

In February, over 4,000 residents in Essen were evacuated when an American bomb was found during construction work.

Just a couple of weeks later, a 250 kilogram bomb was found in the centre of Nuremberg during construction work, leading to the evacuation of 8,000 residents.

The largest post-war evacuation happened in September 2017, following the discovery of a bomb weighing several tons near the Frankfurt university campus. More than 60,000 people were affected.