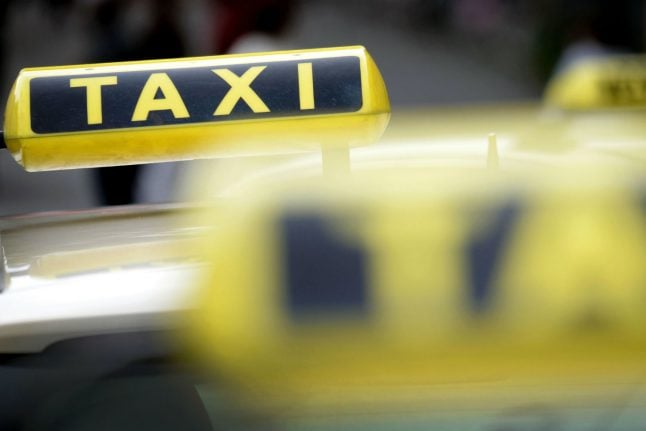 The German Taxi and Rental Car Association (BZP) has called on drivers in around 30 German cities to protest plans to liberalize the taxi market.

The BZP announced that the largest action in Germany was a rally in Berlin, in which up to 5,000 taxis are slated to drive at walking speed from three starting points – Tegel Airport, Olympisches Dorf and Ostbahnhof – to the Brandenburg Gate, reported the Berliner Morgenpost.

“I’ve done my job for 20 years and I would like to do it for another 20 years, but I’m skeptical about whether that will be possible with the current situation,” one taxi driver and strike participant told the newspaper.

Buses have stopped taking passengers to Tegel airport, as the A111 leading there is completely closed off.

There will be a rally at 1.30 p.m., for which the Federal Minister of Transport, Andreas Scheuer (CSU), has announced himself via Twitter, stating that he'll also be there to “hear the demands of the taxi drivers.”

Opening up the market

The protests are directed against plans by the Ministry of Transport to loosen regulations in the transport service market.

Car-services such as Uber and Mola, which have been classified as chauffeured rental car services, would no longer have the obligation to return to their original starting point where they picked up a customer.

BZP fears that these services will be free to decide when and where to make lucrative trips – such as to the airport, where they could also wait for new clients. In contrast, taxis have a legal duty to respond to the call of all clients  – they must therefore cover all needs around the clock, whether profitable or not.

The association is demanding that those who transport people with their vehicle be commercially verified to do so, and that taxis and car-sharing services have to adhere to the same legal requirements.

“We must make it clear that the 250,000 jobs of taxi drivers and the entire mobility system in Germany are under threat,” said BZP managing director Thomas Grätz at a press conference on the planned demonstration on Monday.

The association does not have any figures on turnover losses since the advent of the new mobility services.

The number of cars through mobility service providers, unlike with taxis, furthermore can’t be regulated by law.

Without the obligation to return to their original starting point, there could be “a traffic collapse” if more and more services such as Uber look for customers in the city centre, the BZP fears.

It pointed out that this has already happened in cities such as New York, San Francisco and Amsterdam.

“When we talk about driving bans today, it cannot be that the floodgates are opened for an unregulated rental car market,” says BZP President Michael Müller.

Traffic coming to a standstill

Managing Director Thomas Grätz expects taxi traffic in Berlin to practically come to a standstill for a few hours around noon. However, emergency taxi services, such as ambulance services, will remain active.

Those against whom the protests are also directed will continue to be in action this Wednesday. But Uber, BerlKönig and other driving services could also have problems with congested roads.

On Tuesday, a spokesman for Uber, the driving service agent in Germany, struck a conciliatory tone.

“Taxis are important partners for Uber,” he said. “We all want people to leave their private cars at home more often”.

BZP is demanding that every person who transports people commercially with their vehicle should be verifiably qualified to do so.

In addition, vehicles used for commercial passenger transport must be clearly identified by means of coloured vehicle registration plates.

To enable the authorities to check whether this qualification has been obtained, the electronic central register for goods and passenger transport companies by bus should also be extended to include taxi and rental car operators.

It should also be possible for taxis to offer flat-rate fixed prices for pre-ordered journeys, they stated, or allowed to participate in ride sharing services themselves.

SAS
SAS strike: What can be expected from fresh talks Monday?
Url copied to clipboard!